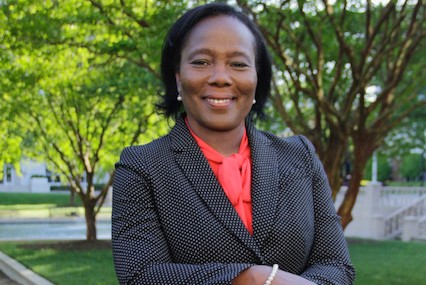 Tracy Espy, provost and vice president of academic affairs at Pfeiffer University, has been named the next president of Mitchell College in New London, Connecticut. Espy becomes the college’s eighth president and the first African-American woman to hold the position.

“I am thrilled to join this incredible community as the eighth president of Mitchell College,” Espy said. “It is a sum of my life experiences that has led me to this unique place during these unprecedented times.”

At Pfeiffer — which operates campuses in Charlotte, Raleigh and Misenheimer, North Carolina — Espy oversees all academic programs. Before her role as provost, she oversaw the Francis Center for Servant Leadership and student leadership groups.

She grew up in the outskirts of Birmingham, Alabama, and earned a bachelor’s degree from Berea College, a small liberal arts school in Kentucky. Espy went on to get her master’s in family studies from Miami University in Ohio, and a Ph.D. in child/family-marriage and family therapy from Syracuse University in New York.

“An expert in human development and family therapy, Dr. Espy possesses the leadership skills and experience to work with all constituencies to move Mitchell College forward,” said Kevin Hennessy, chair of the Mitchell College board of trustees.

He continued, “On a personal level, she is grounded in a desire to serve and connect with others and will be a wonderful model for our community, both on and off-campus.”

After a national search, Johnson C. Smith University has hired Davida Haywood as its vice president of student affairs. She begins in the newly created role on July 1.

Haywood, a 1998 JCSU graduate, returns to her alma mater to take over as the chief officer responsible for housing and residential life, student engagement, counseling, leadership development, health and student conduct.

“She has demonstrated a passion for students and has a strong track record of fostering an environment that allows students to grow intellectually, socially, culturally and spiritually so they reach their highest potential,” said JCSU President Clarence Armbrister.

Her dissertation, “(Re)inventing in the ‘dark’: African American women and presidential leadership,” won the William E. Loadman Most Outstanding Dissertation Award from the School of Educational Policy and Leadership in 2010.