Atrium said the mobile units are about more than simply testing for Covid-19. Residents also are screened for other health determinants. 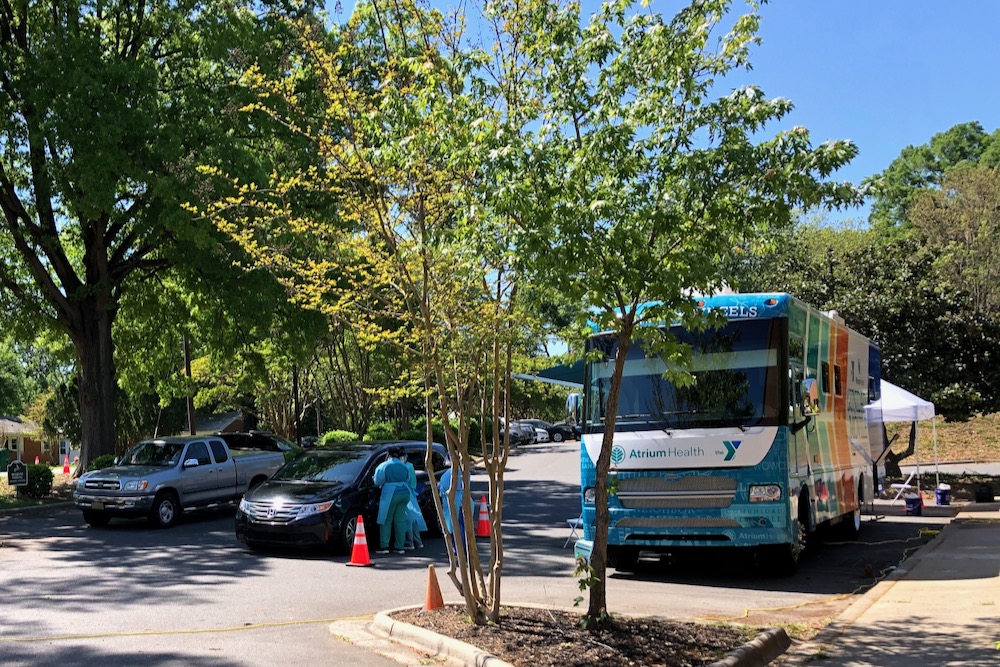 Covid-19 screenings in east and west Charlotte got off to a solid start last week, according to Atrium Health, which sent its mobile units into some of the city’s poorest neighborhoods.

About 150 people showed up Thursday at one of Atrium’s temporary screening sites at First Baptist Church-West on Oaklawn Road. About a third of those who were screened had symptoms that warranted a Covid-19 test, said Kinneil Coltman, senior vice president, chief community and external affairs officer at Atrium.

Two days earlier, Atrium, the region’s largest healthcare provider, had taken one of its mobile units to a parking lot in east Charlotte to conduct similar screenings and testing.

For weeks, a group of Black clergy had lobbied county officials for Covid-19 testing in Charlotte’s Black and Latino communities. And on Thursday, as cars were lining up in front of First Baptist Church-West, the Rev. Ricky A. Woods, the senior minister, stood watching.

“I was ecstatic about the community turnout and participation,” Woods later told QCity Metro. “It clearly shows that this is something that our community wanted.”

Coltman said Atrium is choosing locations for its mobile units based on a data analysis that takes into account race and ethnicity. When results were charted onto county maps, she said, “We did see underrepresentation from communities of color in general. … We’ve met what we feel is a very critical community need.”

Coltman said the mobile units are for more than simply testing for Covid-19. Residents who visit the units are screened for other health determinants, such as access to food, cleaning supplies and their ability to quarantine themselves if necessary. Those with needs, Coltman said, are connected with community resources.

Only those with active symptoms of Covid-19, she said, will be tested for the virus. Those symptoms include fever, cough, shortness of breath and loss of smell and/or taste.

“We don’t want you to come for testing unless you actually have active symptoms,” Coltman said. “I don’t want folks to be disappointed if they are just nervous and wanted a test, just to make sure.”

Coltman said Atrium wants to eliminate as many barriers to testing as possible, including locational barriers. Residents who visit the mobile units are not charged for the service, she said, but those with health insurance may see their insurance companies billed at a later time.

No appointment is needed to visit Atrium’s mobile units.

Atrium Health’s mobile units will conduct Covid-19 screenings and testing this week at these locations and times: