Charlottean Curtis Thompson organized the group of Black horse enthusiasts to bring the cowboy culture from the country to the city. 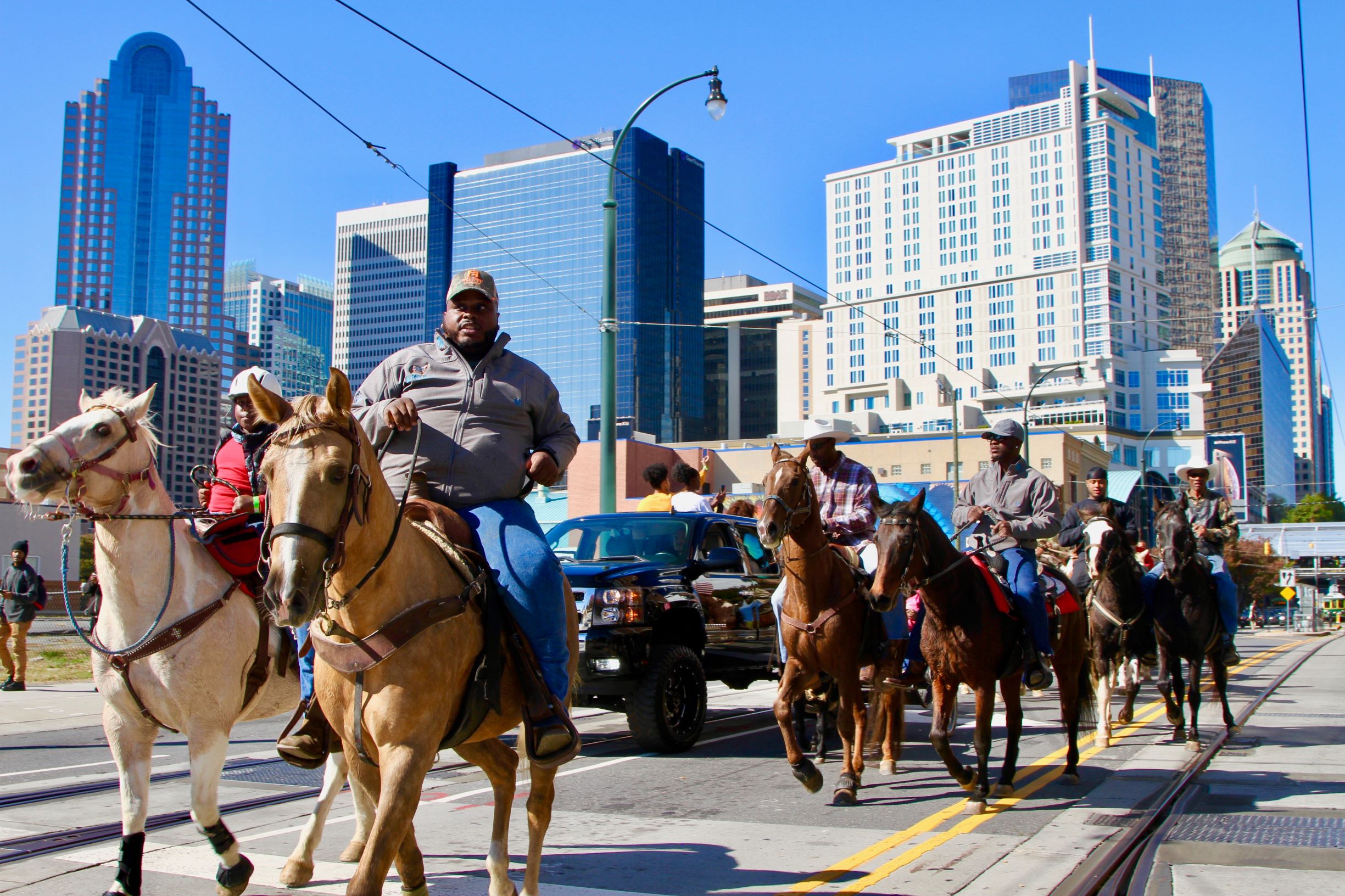 From the mainstream success of rapper Lil Nas X to the “Black Country” documentary taking home an Emmy, the rise of Black cowboy culture is having a moment. But organizations like Charlotte-based Trailbred Riderz show the roots run deep, even in a growing city.

Trailbred founder Curtis Thompson grew up in the city’s Derita neighborhood, but he spent many days at his grandmother’s house on Holland Avenue in Druid Hills. Just two doors down was Big M Stables, one of the few horse farms in the U.S. located in an urban community.

After that, he visited Big M as often as he could. The stable has been a fixture in Druid Hills for over half a century. Its owner, Bobby Martin, was one of the first African-American professional horse trainers in the region.

Big M has a welcoming policy for youth who want to work, train or just come and enjoy the horses. For decades, Martin has used the business to mentor young people in the community.

“I have history with Mr. Martin,” Thompson told QCity Metro. “Mr. Martin may be up there in age, but he gave me a foundation and taught me well. Through his influence, I trained a lot of horses, got injured, healed and got right back on horseback, too.”

Thompson now owns two horses: a Tennessee Walker, known for its running walk and flashy movements, and an Appaloosa with a distinctive spotted coat.

The world of Black horsemanship centers around hard work, kinship and having a good time with all things country. As Thompson grew in the culture, he wanted to expose more city folk to it. He founded Trailbred Riderz in 2017 as a way to do just that, as well as solidify a community of younger Black horsemen and horsewomen in the Queen City.

He and a couple of friends, also horse enthusiasts, were sitting around planning a cookout when one of them, Jamal Haywood, came up with the name. They got t-shirts made and began traveling to shows such as the Ebony Horsemen Trail Ride in Shelby.

They also attend events put on by the East Coast Trail Ride Association, the Black cowboy circuit which snakes through Maryland, Virginia, the Carolinas and Georgia. To distinguish themselves, Trailbred Riderz began hosting city rides as opposed to riding only out in the country.

“Nobody was doing it,” Thompson said. “It’s something a little different.”

A city ride is inherently more risky than riding in the woods because of the added distractions of cars and people. To mitigate the danger, Trailbred has members in trucks cruise alongside riders on horseback to barricade them in and prevent anything from spooking the horses. A city ride also achieves its goal of raising visibility for the group.

Last November’s City Trailride drew scores of spectators as the group rode from Big M Stables through downtown Charlotte. It was a family-friendly weekend of horse rides, a Queen Trailbred Wine & Ride, a horse competition, musical performances and specialty Western vendors. They capped it off with a barnyard party and bonfire.

“We always foster a sense of brotherhood and sisterhood as we ride,” Thompson said. “Plus we throw a cookout, and the food is always free. People can come mingle and watch, or ride if they want.”

Trailbred Riderz has grown to include nine men and three women as permanent members, including rapper Elevator Jay.

Pandemic measures forced the group to cancel the Brotherhood-Sisterhood Trail Ride planned for April 18 at King’s Mountain Battlegrounds. Summer events are also up in the air, but the group is still holding out hope for the fall season.

“We just want to have a good time and make sure everybody stays safe,” Thompson said.