The couple made their nine-year courtship official with a courthouse wedding as the city began shutting down due to coronavirus. 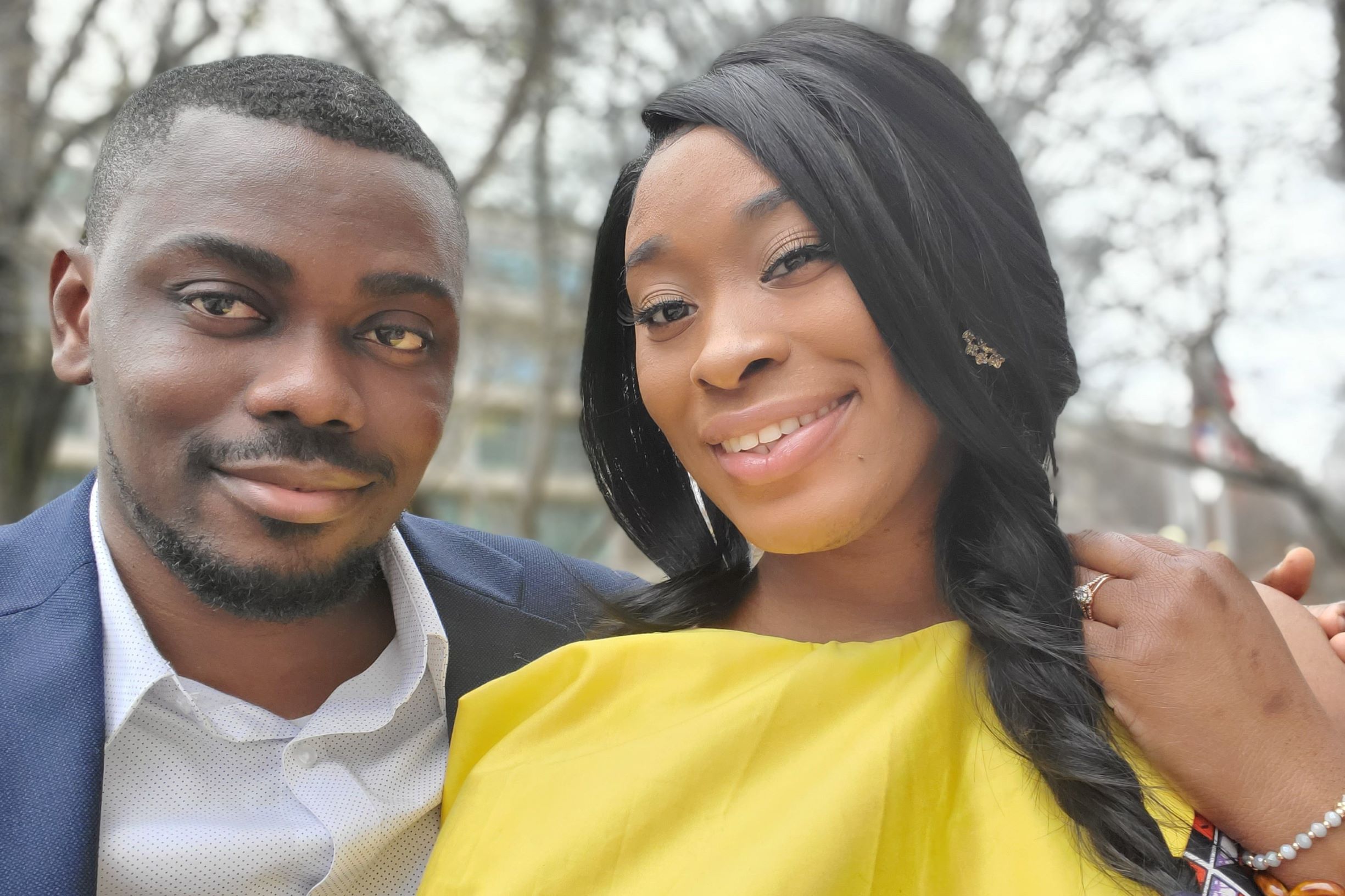 Issac Appiah and Marketa Lucas married at the Charlotte courthouse only days before Mecklenburg County suspended weddings at the courthouse and the magistrate's office. Photo courtesy of Marketa Appiah

Marketa Lucas was never one of those little girls who dreamed about a huge wedding. Getting married in the middle of a pandemic ensured she wouldn’t have one.

Her partner, Isaac Appiah, proposed in February. Earlier that summer, Appiah’s brother had married in a lavish, traditional West African celebration spanning three days. It was gorgeous, but neither of them wanted anything like that.

“People spend so much on a single wedding day,” Marketa said, shaking her head. “I love him, and I love our money. I’d rather buy a new car or a hot tub and put the rest of that investment into our life together.”

Marketa and Isaac met working at a restaurant in Worcester, Massachusetts, when she was 17 and he was 20. He’d just emigrated from Ghana the year before and didn’t know much English, so she took it upon herself to teach the reserved newcomer basic slang.

“I was fascinated by the things he didn’t say to me,” Marketa said. “He would just stare, and I’d be like, ‘What are you looking at?’ And he’d say, ‘You.’ It was a little creepy,” she said with a laugh.

The two got past the early awkwardness to become good friends, but being a bit taller than him, Marketa didn’t look at Isaac as a romantic possibility. That changed when she moved to New York City to attend school at the Culinary Institute of America. Isaac drove two hours to see her every weekend. The shy guy eventually confessed that he’d fallen in love. Marketa was shocked at the news.

“I didn’t know how to take it, and I didn’t take it,” she said, but Isaac didn’t give up. He kept visiting, and when he couldn’t, he wrote her love letters and poems and sent gifts.

She agreed to give a long-distance relationship a chance. The two kept up their connection even as Marketa moved to North Carolina in 2011 to pursue her ambitions of becoming a chef. In 2016, Isaac moved down to join her, and the two have been together ever since.

Home for the first time

Isaac took Marketa home to meet his family in New Town, in the Western region of Ghana, over the 2019 Christmas holidays. It was her first trip to the Motherland. The memory still makes her feel warm inside.

Although her family has strong roots in South Carolina, Marketa grew up in Massachusetts, where at times she’d felt awkward about her looks.

“Growing up in school, I was the tall Black girl with big legs. I wasn’t recognized by the boys,” she said.

But in Ghana, she was lauded for her beauty. Strangers passing by would note her stature and flowing skirts and call her Yemaja, the Yoruba goddess of flowing waters. She didn’t stick out there; in fact, she saw many people who resembled herself and members of her family.

“It was like coming home to a place I’d never known was there. You feel free, don’t have doubts about yourself or how you look,” she said. “I saw people who looked just like my aunt or my cousins. It’s shocking that these genes still carry so many similarities.”

Marketa spent the week shopping and bonding with Isaac’s family. Before the couple returned on New Year’s Day, his mother insisted on taking her to a seamstress to be fitted for custom Ghanaian formalwear. Though there wasn’t time to finish the garments, they promised to mail them to the States when they were complete.

Back in North Carolina, Isaac returned to his job at Novant Health Urgent Care, and Marketa accepted a chef position at a restaurant in a soon-to-open luxury hotel. They discussed a simple wedding, maybe on the beach, and buying a house down the road. Weekends were spent browsing rings and preparing for a mid-March visit from Isaac’s family. But each week brought reports of a worsening global crisis, and as the first coronavirus cases hit the U.S., workers in the medical industry went on high alert.

One cool mid-February afternoon, Marketa noticed Isaac had left his wallet at home. She brought it to the hospital, and Isaac met her at her car with a story. An elderly couple had come into the ER that morning. The wife was sick, and while they waited to be seen, the husband tucked his jacket around her to make her comfortable. The tenderness of the moment, coupled with the urgency of the epidemic, spurred Isaac to action.

“Life is too short, and I don’t want to keep waiting to spend our lives together,” he told Marketa. “Marry me.”

Even though she’d been expecting a formal proposal, she couldn’t stop herself from crying.

The two tied the knot Friday, March 13, at the Uptown courthouse, with Marketa wearing the Ghanaian dress that had arrived via post just in time. Isaac’s family had already arrived for the visit, so what might have been an engagement dinner turned into a wedding reception.

The party was held in the Appiahs’ living room, which Marketa’s mother transformed into a romantic cultural setting. Kente cloth runners and flowers adorned the table settings, oversized photos of the couple’s nine-year courtship hung everywhere and Marketa, a former pastry chef at Angeline’s in Uptown, contributed special sweets to the dessert table. They kept the gathering small, just about a dozen close family members.

The Appiahs are planning something just a bit bigger, once the crisis lifts. Marketa says they may rent a beach house in late summer or fall, in Charleston or Hilton Head, so that friends can celebrate with them and wish them well.

Though she’s not going to go full bridezilla, “I still want my white dress,” she said.