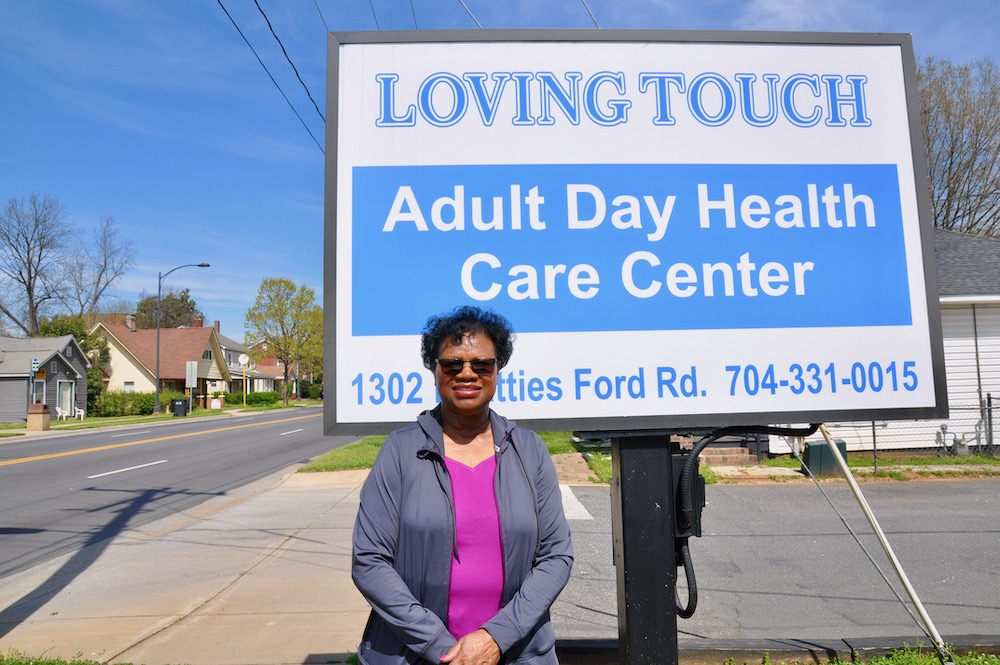 Joyce Freeman, director of Loving Touch Adult Day/Health Center on Beatties Ford Road, has run perhaps the only licensed business catering to seniors’ daytime needs in the corridor for 20 years. But within the last two weeks, uncertainty around the coronavirus outbreak has pushed her finances to the margins. The business has closed through the end of the month, if not longer.

“Some clients were upset we were closing, but with the population that we’re dealing with, I’d rather not take that risk,” Freeman told West Side Connect.

Seniors, young children and those with compromised immune systems are especially vulnerable to coronavirus, according to the Centers for Disease Control and Prevention.

Freeman’s business is among the entities that make up Charlotte’s current Black Wall Street — a stretch of Beatties Ford Road heavily populated by Black-owned retail and service companies. Several already are feeling the effects of the coronavirus’ economic impact, with reduced walk-in business or, in Freeman’s case, forced closure altogether for the sake of clients’ health.

Small businesses make up the backbone of the U.S. economy, generating about half of the gross domestic product, but the odds are generally stacked against them. According to the Small Business Administration, almost 50% of small businesses fail within five years. A prolonged, severe downturn in profit would be catastrophic.

Loving Touch normally employs a staff of 12; by the week of March 15, Freeman had cut back to just four employees. Without clients, she’s paying wages through her credit cards.

The SBA promised up to $2 million in loans to help small businesses make payroll, cover bills and repay debts. However, the welcomed assistance comes with limits to staff size and other stipulations that could disqualify businesses.

“We need to be reimbursed because we’re closing to keep everyone from being sick,” she said. “We need all the assistance we can get. We’re just asking agencies to work with us.”

There are three Anderton stylist shop locations on the west side — two of them along Beatties Ford Road and one on Statesville Avenue. The shops have been in operation since the 1980s and are active in the community. The location in University Park Shopping Center is particularly known for hosting voter registration events, partnering with nonprofits and being a welcoming safe space for Black men to talk news of the day.

The shop was uncharacteristically quiet on an early Tuesday evening, but Rodney Thomas-Bey wasn’t perturbed.

“There’s a lot of fear being brought into the businesses” by media reports, he said while fading up the shop’s sole customer. “We haven’t dropped [traffic] as of yet, but the threat of it makes for some concern.”

Thomas-Bey, a barber for 20 years, said he’s seen the area change drastically over the years, from highs to lows. While he faults media outlets for panicking the public, he reminded other businesses of a shared responsibility to serve the community.

“We’ve got to remember, God’s got us,” he said. “I might have seen an increase [in customers], honestly. A lot of people have more time and they’re going to want their hair cut.”

All that could change, of course, in an instant. In several states — Minnesota, Ohio and Colorado among them — health officials have ordered hair and nail salons to close because of coronavirus concerns.

A few doors down at Keaton’s Cupboard, owner Keaton Wells adopted a more wait-and-see attitude. The Charlotte native was proud to open up a special occasion boutique last year near his old neighborhood. He developed a strong following by stocking patterns and prints that most big-box men’s stores shy away from. But, Wells has seen a troubling decrease in sales over the past few weeks.

“Typically the shopping center is busy, and we could count on some walk-ins because of that. Now, the shopping center is still busy, but people are getting things they absolutely need at Food Lion and their medicines at CVS, and then they’re gone,” Wells said. “It made me worry the other day about the impact it’s going to have on the store, but for now, I’m here. I’m going to open every day and just see what happens. I have no plans to close.”

On the day he spoke with QCity Metro’s West Side Connect, he hadn’t seen a single customer but said they typically don’t have large crowds anyway; just one or two in the store at a time. He’s less concerned with relief loans from the SBA. Rather, he’s looking for better, more consistent information from the halls of government.

“They need to ease [the public’s] troubled minds and let them know to continue life as normal, if that’s what we can do. If it’s not, and we need to make some adjustments, we can do that,” Wells said.

In the meantime, he said clients still can shop at his online store.

If there’s a silver lining

On Tuesday, Gov. Roy Cooper ordered all eateries in the state to pause dine-in services but allowed take-out and delivery services to continue. Along the corridor, it was an unexpected bright spot in the daily coronavirus-related news since most restaurants on Beatties Ford Road are carryout. So far, owners haven’t seen it as a serious blow.

Kobbi Bonsu, co-owner and manager of Mama Gee’s Ghanaian restaurant, said he doubted the government restriction would hurt them at all.

In fact, after posting to Instagram for a lunch special on Tuesday, “people came and showed so much support we sold out of all our food an hour before closing,” he said. Rice and spinach — their best-selling plate made with spinach, egusi (melon seed), beef and mackerel — sold out three times.

Bonsu is more worried about the long-term effects on the community, as customers self-quarantine and others tighten their belts. All but one of their eight employees are relatives, and they had to send the one nonrelative home on a recent day because profits weren’t enough to continue paying him.

“We’re trying to hang on as best as we can,” Bonsu said.