Most students left for an extended spring break. Others have until March 30 to vacate campus. 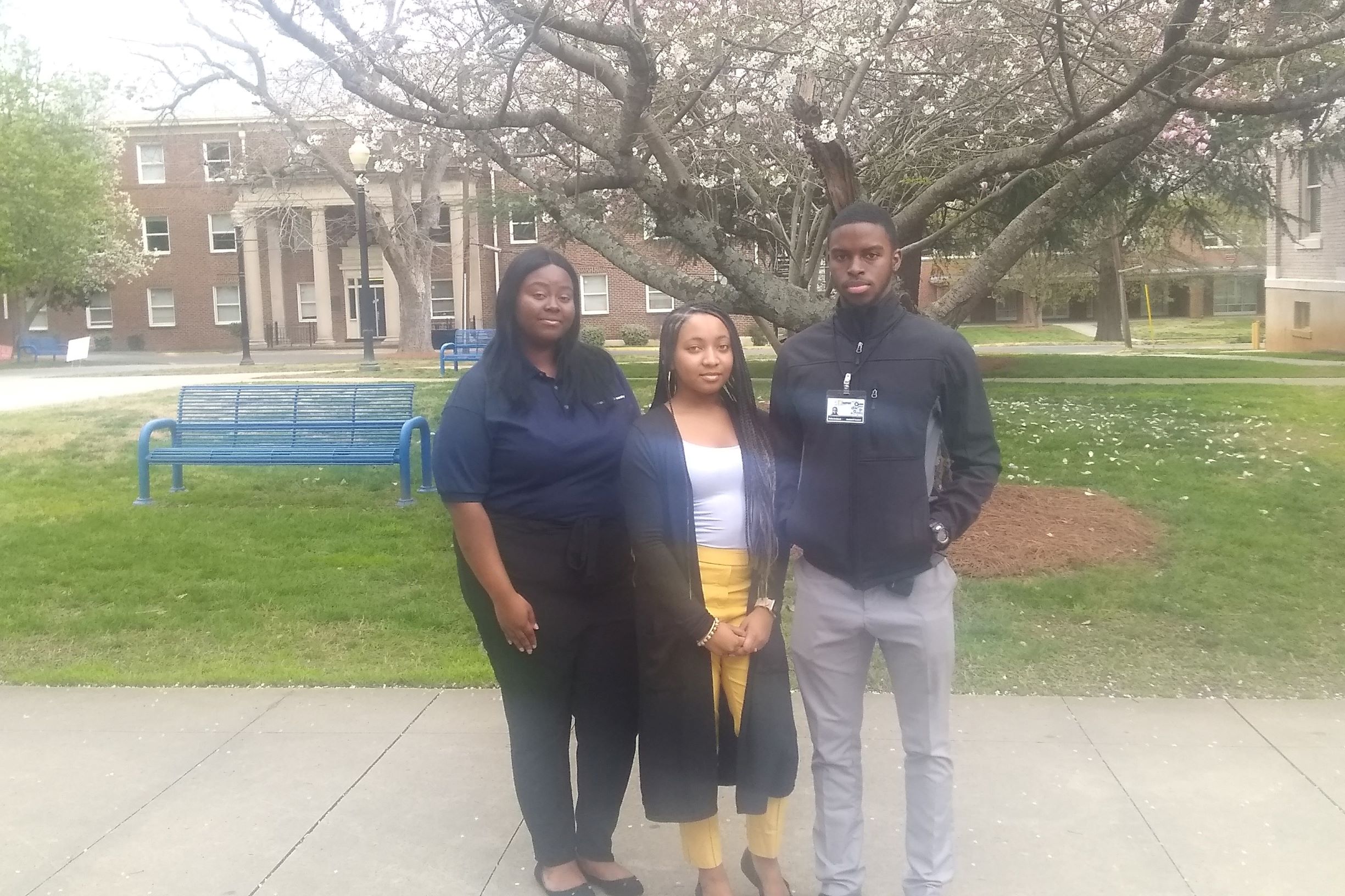 SGA President Shakoya Brown (left) hopes to remain in her dorm until graduation, but SGA board member Crystal Howard and resident assistant Phillip Beckford are eager to leave a campus devoid of students.

Only one thing was missing: the students.

As the novel coronavirus interrupts nearly every aspect of life in Charlotte, the JCSU campus has become a “ghost town” for the handful of students who remained, Crystal Howard, a junior, told West Side Connect.

The vast majority of the Golden Bulls student body left last week, after administrators sent students home for an extended spring break. Most won’t return for the rest of this semester. Even the 2020 commencement ceremonies have been postponed.

“We are looking into our options and will have information on how we will celebrate our Class of 2020 after the immediate threat has passed,” the school said in a statement sent to students this week.

Those students who do come back were told they must vacate student housing by noon on March 30, the same day academic classes would shift to online.

She wants to stay

Student Government Association President Shakoya Brown was one of the few remaining students on campus over spring break. Brown, a native of Fort Lauderdale, Florida, hoped to spend the remainder of her senior spring semester in her dorm before launching a career in Charlotte.

“Everybody is concerned,” she said. “If we pick up and move home, how will that serve us to graduate? How will it affect our transition from undergrad to next steps, whether it’s a job or graduate school?”

Brown put in a request to remain on campus beyond March 30, to the end of the school year. The dean of students will make the decision.

Howard and Phillip Beckford, also a junior, were much less excited at the prospect of remaining on campus. Both work as student IT technitions. The two sat in an overheated office on the empty second floor of the James B. Duke Memorial Library.

“Either people are gone or they’re on their way out,” Howard said. “It’s become a ghost town. But we’re still here because of our jobs.”

At the time of publication, the two had a full week of employment left. March 27 was scheduled to be their last day of work, ahead of the March 30 deadline to vacate college housing.

Beckford, who is also a resident assistant, didn’t like thinking about the return of students from spring break.

“They’ll be coming back from all over the world where all this [coronavirus] has been going on,” said the Jamaican national. “I have to make sure I don’t interact with anybody, because I don’t know where they’ve been.”

Initially after the announcement, it was thought that vacating the international students might pose a financial and logistical hardship.

A letter from President Clarence Armbrister, posted to the university website March 16, read: “A limited number of students including international students, students with travel restrictions and other students with the approval of the Dean of Students will be allowed to stay on campus to complete the spring semester.”

The exact number of students still on campus is unclear, a JCSU spokeswoman told West Side Connect. But according to Beckford, most of the international students found ways to leave.

The university clarified, via email, that to meet U.S. Homeland Security standards for the Student and Exchange Visitor Program, international students had to provide an addresses and stay in touch with their on-campus international representative. Then they, like the rest of the students, could complete their courses online, from a place of safety.

Beckford said he had no plans to remain on campus.

“I have to think about what I’m going to eat, all those things,” he said. “I’m going to Myrtle Beach, South Carolina, where my aunt is. I’m not going on any plane or to any airports.”

Howard, another member of the SGA executive board, planned to go home to Charleston and finish out the semester online. She has questions about reimbursements for unused portions of her meal plan and other payments — questions now answered in the university’s latest communication to students.

“They’re talking about having some meetings, holding potential virtual town halls…” she said.

Despite the uncertainty, both students said they plan to return to JCSU next school year.