The West End neighborhood would join six other Charlotte communities as historic districts. 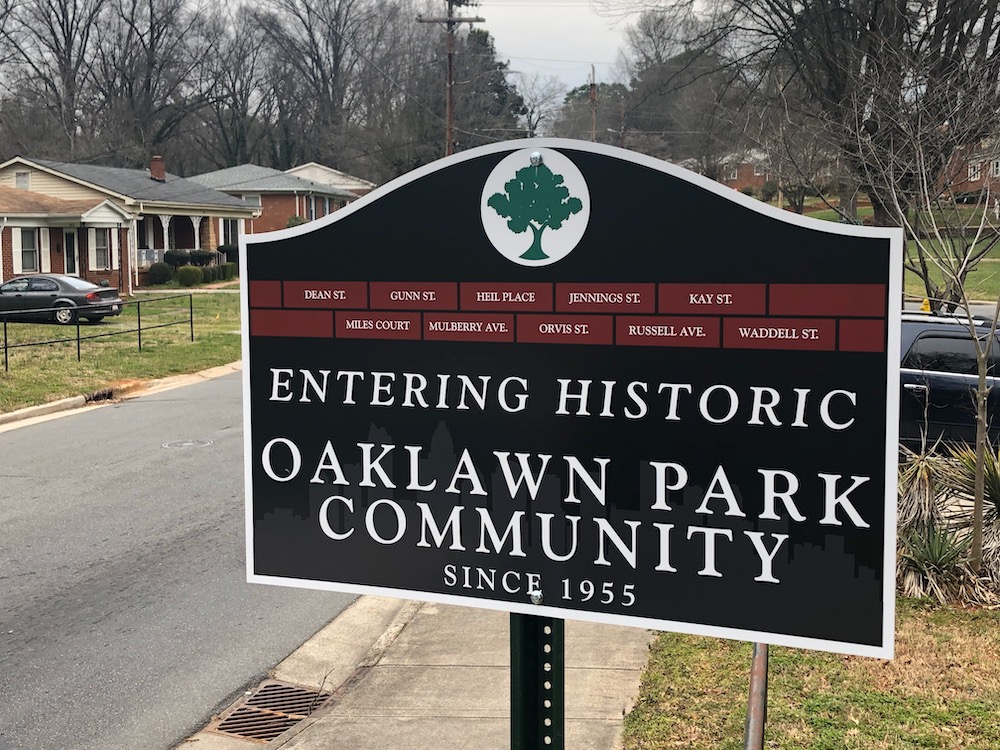 Supporters hope the label will prevent the construction of ultra-modern, high-priced homes that would overpower the area’s mid-century charm and drive up real estate tax rates, displacing long-time residents. Others, however, fear the designation may trigger the same effect.

City Council is scheduled to vote in June, making Oaklawn Park the first West End neighborhood to receive the designation.

Pride Dunlap grew up on Waddell Street, just blocks from her current home. After attending college she married and moved further up Beatties Ford Road, to University Park, where she stayed for 20 years, but returned to Oaklawn Park to be a caregiver when her mother became ill.

“When I bought this house in 2008, the neighborhood looked exactly the same as when we were kids, riding around on our bikes,” she recalled.

But around 2013, she said, things began to change. Like many neighborhoods close to Uptown, the tucked-away community was discovered by younger, more affluent home buyers more influenced by HGTV’s Fixer Upper than the houses’ post-war aesthetic. Suddenly, investors were painting the staid red brick in unexpected colors and subdividing lots to shoehorn more homes for maximum profit.

Amid rising fears that developers would obliterate the character of Oaklawn Park, a solution presented itself. Highway planners of the toll lanes for nearby I-77 discovered that the neighborhood had been intact for more than 50 years, giving steam to  Oaklawn’s plan to seek the historic designation.

“A historic designation will provide clear guidelines and make painting brick or going up [multiple stories] a no-no, more than likely,” Pride-Dunlap said. “If you want to demolish good housing stock, it will stretch the process out by a year, and maybe you’ll change your mind.”

In making her case to Oaklawn Park’s residents, Pride-Dunlap knocked on doors to get signatures from more than 51% of the neighborhood’s 227 households.

Support for the measure was not unanimous. Jerome Walker, vice president of the neighborhood association, worked 35 years in housing and neighborhood development in Texas, Virginia and Washington, D.C. From his front yard on Dean Street, he can see the new Brightwalk subdivision, where houses routinely sell for $400,000 and up. Farther out is the Uptown skyline.

Walker shares Pride-Dunlap’s concerns about preserving the integrity of Oaklawn Park, but he worried that a historical designation will increase the costs residents pay to renovate their homes, placing an undue burden on seniors in particular. Homeowners looking to change the exteriors of their homes would have to get approval from the 12-member Historic District Commission.

Walker said he’s philosophically opposed to seeking outside permission before making improvements to his property. But given that a majority of households voted to support the application, Walker said he has put his opposition aside.

“It’s my responsibility to do what the neighborhood thinks is in its best interest,” he said. “This is a hot neighborhood, and new people are buying in. You have to do what you can within the confines of the rules and get along with folk.”

Across Oaklawn Avenue in McCrorey Heights, the case for and against pursuing a historic designation has been debated for years, with residents citing arguments similar to those heard in Oaklawn Park. Meanwhile, some of the bigger lots in McCrorey Heights are being subdivided for possible construction, and a large, newly built minimalist home, derisively dubbed “The Barn” for how it sticks out among the area’s brick mid-century ranches, sold in December for $505,000.

Natalie Beard, president of McCrorey Heights Neighborhood Association, said distrust plays a part in the dissension. Proponents of the historical designation include relative newcomers without family ties to the neighborhood, and legacy residents are concerned about hidden agendas, she said.

“Who do you want making decisions, the city or the neighborhood?” she asked. “We already have covenants in place that need to be enforced. Dr. McCrorey fought to get us a place to live [in the 1940s]… We only got paved sidewalks in 2012. Now will we trust the city has our same interests at heart?”

Edwin Wilson, a real estate agent who has lived in McCrorey Heights for 10 years and serves on the Charlotte-Mecklenburg Historic Landmarks Commission, disagreed. A long-time supporter of efforts to obtain local historic district protection, he especially likes the year-long demolition delay that comes with historic designation, which he said makes the economics of tearing down homes inconvenient for predatory investors.

“Without some structure of preservation,” he said, “capitalism and property rights destroy what was before. Especially in urban environments, you see yesteryear eliminated.”

Presented with the concern that historical designation could drive up the tax rate, Wilson responded doubtfully. He gave an example of an investor buying a house built on three lots. Under McCrorey Heights’ current rules, that buyer could tear down the house and sell each lot at $200,000 apiece to builders, who could then erect half-million-dollar houses on each parcel.

“Which scenario do you think would drive up the tax rate faster? If anything, the designation would slow it down,” he said. “I don’t know of a better protection against gentrification than a local historic district. I just don’t.”

Pride-Dunlap enlisted the help of Kristi Harpst, from Charlotte’s Neighborhood Rezoning office, to guide Oaklawn Park through the process of being rezoned a local historic district. Harpst is creating postcards to inform potential buyers and investors of the community’s history and status.

At a recent neighborhood association meeting, Harpst reminded residents that current building permits could continue, but once the designation is in place, any new permits would be reviewed to ensure they align with historic guidelines. New fences, windows and painted brick don’t require permits, she said, but can be kept to community standards by code enforcement.

At four entry points to Oaklawn Park, residents already have seen signage erected, foreshadowing the historic designation. In addition, toppers have been placed on street signs.

On May 18 at the Charlotte-Mecklenburg Government Center, City Council will hold a public hearing on Oaklawn Park’s request. Residents are encouraged to turn out en masse. Representatives will present to the planning commission on June 2, and the council will vote on the designation June 15.