A three-judge panel of the North Carolina Court of Appeals ruled Tuesday that Senate Bill 824 was written with an “intention to target African American voters.” 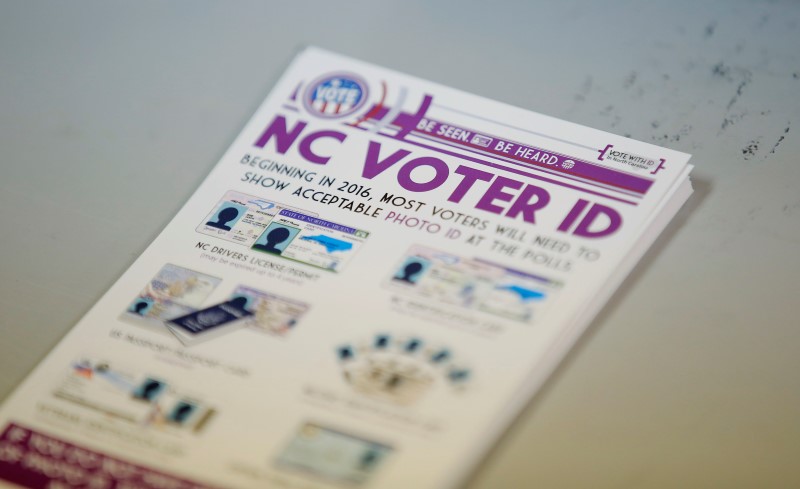 A pile of government pamphlets explaining North Carolina's controversial "Voter ID" law sits on table at a polling station as the law goes into effect for the state's presidential primary in Charlotte, North Carolina, U.S. on March 15, 2016. REUTERS/Chris Keane/File Photo

More specifically, a three-judge panel of the North Carolina Court of Appeals ruled Tuesday that Senate Bill 824 was written with an “intention to target African American voters.”

With Tuesday’s ruling, opponents of the voter ID law said it was unlikely that identification documents will be required of North Carolina voters when they go to the polls in November.

What it matters: Some consider North Carolina to be a swing state in presidential elections. Donald Trump won the state in 2016 with 49.8% of the ballots cast — beating Hillary Clinton by 173,315 votes.

With its 17 electoral votes, the state is considered a must-win for Trump, who will be nominated for a second term at the Republican National Convention in Charlotte, scheduled for August 24-27.

An uphill fight: The voter ID law was written by Republicans and passed by Republicans over Gov. Roy Cooper’s veto after voters amended the state’s constitution to require identification for voters seeking to cast a ballot. Since then, the legal battles have been fought mainly over the law’s constitutionality and what forms of photo ID would be accepted.

Opponents say the law was written to exclude many forms of ID disproportionately held by Black voters, making it racially discriminatory. The law also took aim at students, making it harder for those attending private universities to use their student IDs.

The voter ID law already was under a temporary block after a federal court ruled in a separate lawsuit that some provisions of the law violated the U.S. Constitution’s guarantee of equal protection under the law. That injunction was set to last at least through next month’s primary elections, when North Carolina voters will go to the polls March 3 as part of Super Tuesday.

Uncertain future: Even if the federal injunction is lifted, such a ruling would not be expected to impact the state court’s ruling. The state appeals court judges said their injunction would stand until the case is decided, presumably well after the November election. The judges also expressed concern that changing voter ID requirements between now and November would lead to voter confusion and “a strong potential to negatively impact voter turnout.”

The bottom line: Injunctions notwithstanding, state GOP leaders vowed Tuesday to continue the fight. “…we will not be deterred by judicial attempts to suppress the people’s voice in the democratic process,” House Speaker Tim Moore said in a statement Tuesday. [Glenn Burkins]