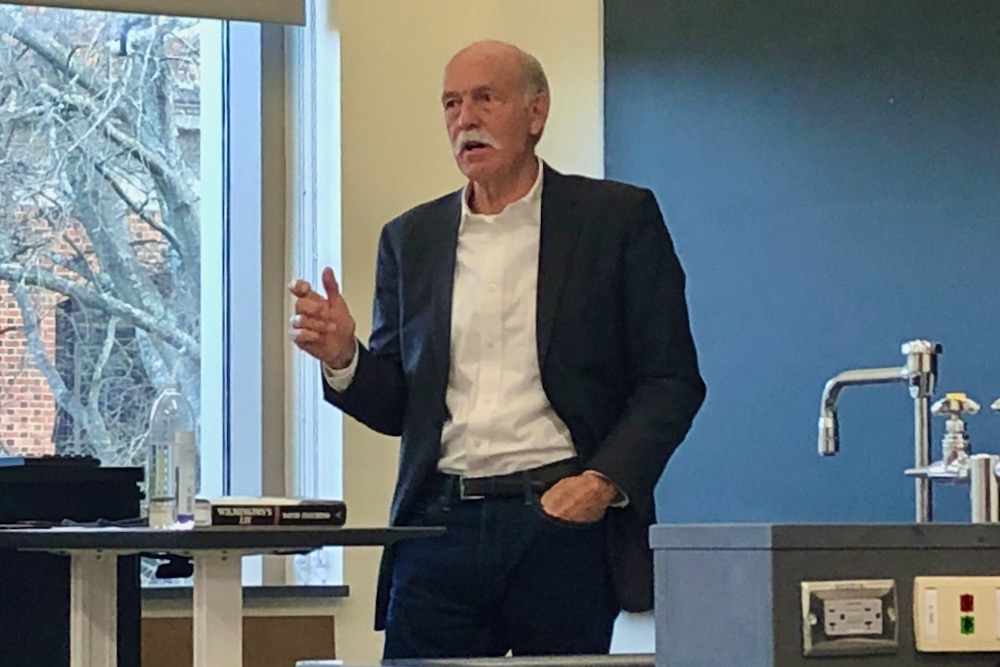 As a newspaper reporter in the 1980s and ‘90s, David Zucchino earned a reputation (and a Pulitzer Prize for feature writing) as one of the leading storytellers in daily journalism.

These days, when he’s not working as a contributing writer for The New York Times, he’s out on tour promoting his latest book, “Wilmington’s LIE: The Murderous Coup of 1898 and the Rise of White Supremacy.”

“Wilmington’s LIE” is a narrative that recounts the true story of how a group of well-organized white supremacists, aided by local and national media, succeeded in overthrowing a multiracial government along the North Carolina coast just 33 years after the end of slavery and the close of the Civil War.

Zucchino will be in Charlotte on Feb. 20, a guest of QCity Metro, to take part in a community discussion about events in 1898 and their reverberations in today’s political climate.

In the Q&A below, some of Zucchino’s answers were edited for brevity and clarity.

Q. What attracted you to the Wilmington story?

One was the fact that it just wasn’t very well known. It’s this major event, not only in North Carolina history but in American history, that was really buried and misrepresented for so many years. I just thought the full story needed to be told. It had been told a couple of times by African-American scholars, once in 1951 and again in 1984, but it never really left the academic world or the scholarly world.

Q. What does “Wilmington’s LIE” add to the body of work that was already out there?

I don’t in any way claim to have broken the story. This story, as I said, has been told many times. I’m just hoping to bring it to a wider audience and tell it in a little different way than a historian or an academic would. In fact, I relied on a lot of the research done over the years by historians and academics, but I tried to frame it as a narrative. I wanted to tell a story with characters and get behind the motivations of the characters on both sides and also explore the manipulation of people’s emotions and fears through this fake news campaign that was run by the newspapers at the time.

Q. Did you find any surprises along the way?

A lot of surprises. One was the fact that it was so well covered by the national media at the time. The white supremacists, during the white-supremacy campaign of 1898, had announced beforehand that they were going to end what they called “Negro rule” and “Negro domination” by the ballot or the bullet or both. And they made it clear that violence was going to be required and that they were prepared to use violence. And this just attracted an incredible amount of national attention. The New York Times and The Washington Post, The Philadelphia Inquirer, Chicago Tribune — papers up and down the East Coast all sent their white reporters down to cover what they called the race war.

Q. You’ve been clear that you see parallels in today’s political environment. What do you mean by that?

Yeah. As soon as white conservatives in North Carolina took over the state legislature in 2011, they immediately set about trying to suppress the African-American vote. It wasn’t as overtly racist as it was in 1898, but the effect was the same. They passed the voter I.D. law that was squarely aimed at affecting and limiting African-American voters. They also went after students as well… In fact, a federal judge who struck down the law said that the provisions targeted African-Americans with almost surgical precision… There’s also gerrymandering, which white conservatives in the state legislatures have used, just as the white supremacists did in 1898, when they took the two African-American wards in Wilmington and gerrymandered them to try to dilute the black vote.

Q. What’s been the most lasting effect of Wilmington 1898?

I think just the targeting of people of color as somehow not belonging. And I see that again today with the rise of Donald Trump, who very clearly played into fears and resentments of many, many white voters. And my fear is those resentments and fears and actual racism have been bubbling along for some whites all these years. And it took someone like Donald Trump to bring it out. My fear is that that level of resentment and hate and racism from 1898 is working its way back up into our political discourse today.

Q. The city of Wilmington also was changed by events in 1898. Can you talk about that?

For one thing, the black population [of Wilmington] in 1898 was 56%. Today, it’s 18%. As the book explains, immediately after the coup and the massacre, at least twenty-one-hundred African-Americans just fled the city, and Wilmington very clearly became known as a place where African-Americans not only were not welcome but were in physical danger. It completely destroyed the black middle class. It was a thriving black middle class in 1898, and there was a black professional class. Neither of those has returned to the levels they were in 1898. So it had a huge impact on what Wilmington looks like today.

Q. Have you gotten any pushback for writing the book?

No. I sort of expected it, particularly when I did a talk at the public library in Wilmington. I was expecting some people to come up and say, well, why are you stirring up all this racial resentment after all these years? Can’t we just let it die? It was 122 years ago. Let’s move on. That hasn’t happened yet. The audiences have been very receptive. Mostly people are extremely curious. I’ve gotten some really, really good questions at different book events from audience members, particularly in Wilmington.