Susan Rice, former advisor to Obama, reflects on ‘things worth fighting for’

The former U.N. ambassador and national security advisor said America has seen other periods of political and social polarization. 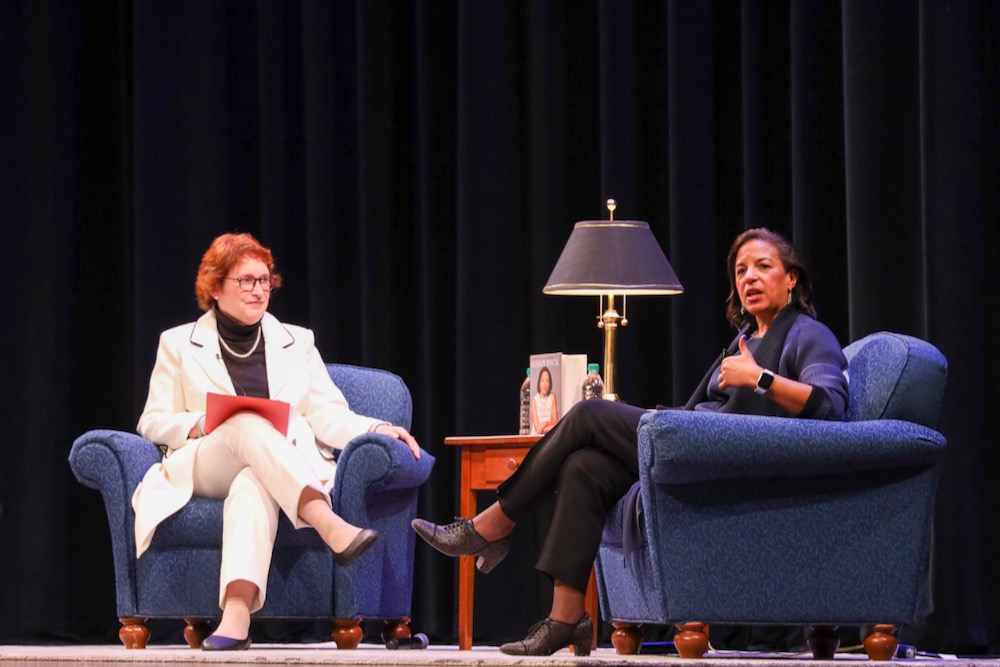 The polarization that plagues the American political system is “small potatoes” compared to some of the issues that previously have divided the nation, such as the American Civil War, two world wars, and the post-slavery Reconstruction period, says Susan Rice, who served as former President Barack Obama’s United Nations ambassador and national security advisor.

“We just need to recognize the urgency of the moment, the nature of the challenge, and recognize that, like a family, we have a choice,” Rice said during a public conversation with Jane Zimmerman, director of the Dean Rusk International Studies Program at Davidson College. “We can allow ourselves to be pulled apart or we can decide that, despite our differences, we’re better off together.”

Rice, a Rhodes Scholar and 1986 graduate of Stanford University, also talked on the subjects of family, education, equality, and democracy and national unity – all “things worth fighting for, as outlined in her new memoir, “Tough Love: My Story of the Things Worth Fighting For.”

Rice defined “tough love” as “loving fiercely but not uncritically.” She said her parents raised her and her brother that way, and that she and her husband have tried to foster the same environment for their children.

Tough love, she said, “is how I have tried to lead my teams in government,” adding that she received tough love as well.

“I love the United States of America passionately, and I think we are a phenomenal country, but we are not without our flaws,” she said.

As a descendant of Jamaican immigrants and enslaved people from South Carolina, Rice said she learned that “bigotry is, to a larger extent, the function of somebody else’s insecurity.”

These two family legacies empowered her to “not let anyone define me,” a principle she encouraged her audience to adopt.

Rice also advised those in attendance to “put family first,” including the lives of coworkers. It’s the only way to function in high-level positions and lead teams effectively, she said.

Rice spoke of a political divide within her own nuclear family, which she discusses in the final chapter of her book: Her son was president of the College Republicans at Stanford, while her daughter remains more “progressive.”

“The love we have and the values we share and the hopes we have that bind us are so much more important than our differences,”she said.

Comments from the crowd

Dr. Laurie Heyer, the Kimbrough Professor of Mathematics at Davidson College, said she had not known much about Rice’s life before the event and was inspired. “I really appreciated the comments at the end about the greatest threat to our national security being ourselves, recognizing that in some of my own family and professional situations, so often that is the case,” Heyer said.

Maddie Buitendorp, a sophomore at Davidson, spoke of Rice’s expertise: “I really like how driven she is. Having another woman who works in the policy arena and being able to say, ‘Hey, I’ve been there,’ is a really powerful thing for me,” she said.

Karmella Haynes, an associate professor in the Wallace H. Coulter Department of Biomedical Engineering at Georgia Tech School of Engineering and Emory University School of Medicine, said she connected with Rice’s stories on a personal level. “It was definitely an experience hearing someone with a personal narrative that was very similar to my own family’s narrative,” she said, noting familial experiences with racism and discrimination.

“To see a woman that had achieved that much with the same background as me…it meant more to me than her simply having the same identity as my group. It was awesome; it was powerful,” Haynes said.

Lizzie Kane is a student at Davidson College.