The acclaimed lawyer and human rights activist spoke to a capacity crowd at Davidson College. 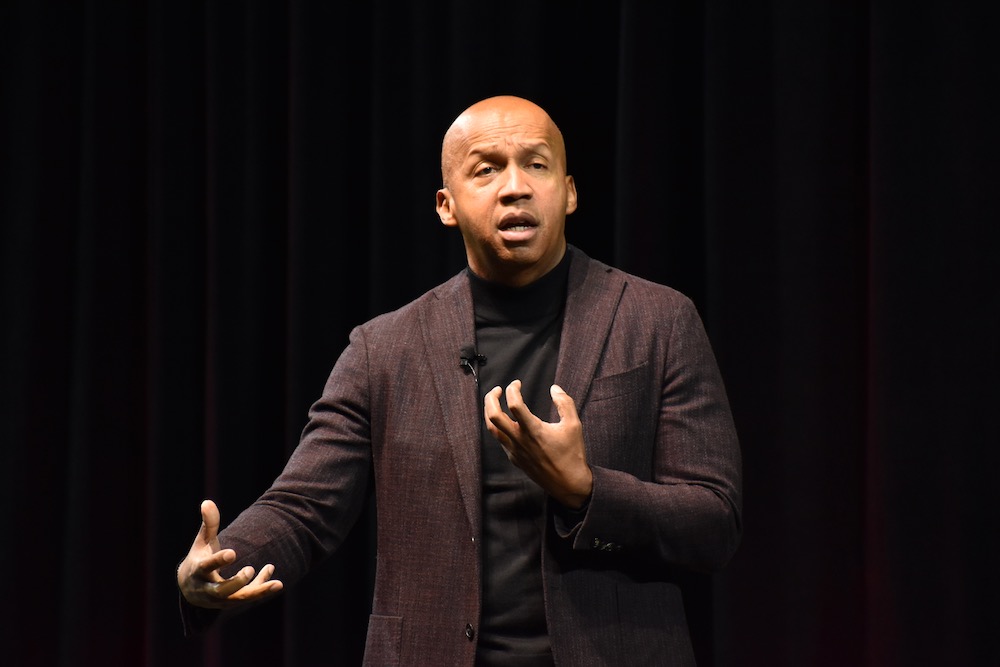 “I want to talk about how we change the world,” Bryan Stevenson said as he opened a lecture Tuesday night at Davidson College.

Stevenson, a Harvard-educated lawyer and noted human rights activist, knows something about advocating for change. In 1989, he founded the Equal Justice Initiative, a Montgomery, Alabama,-based nonprofit that provides free legal assistance to prison inmates facing execution. By some accounts, the nonprofit Stevenson started fresh from law school has won freedom or judicial relief for more than 135 wrongly condemned prisoners on death row.

His story is depicted in the new film “Just Mercy,” which is based on Stevenson’s 2014 memoir. He was at Davidson to deliver the school’s Reynolds Lecture, where he spoke to a capacity crowd inside the John M. Belk Arena.

His advice to others looking to make a difference: get proximate, change the narratives, stay hopeful, and learn to be uncomfortable.

Stevenson said change is impossible when working at a distance.

He used the example of politicians who make laws far from the people impacted, “not close enough to actually understand the nature of the problem.”

Stevenson recalled that it took lawyers willing to come to his boyhood neighborhood in Delaware to successfully fight for school desegregation.

Stevenson said changing the world also means changing “some of the narratives that are sustaining inequality and injustice.”

He spoke of how drug addicts in the 1970s and ’80s were categorized as “criminals,” not a people who needed treatment for health problems, which led to an era of mass incarceration.

“We were being led by a narrative that I call ‘the politics of fear and anger,’” he said. “Fear and anger are the essential ingredients of injustice and oppression.”

Stevenson said Americans whose skin is black or brown – even accomplished students and faculty members – “will go places in this country and you will have to navigate the presumption of dangerousness and guilt.”

He said America needs “an era of truth” to change the “narrative of racial difference.”

In Johannesburg, South Africa, he said, “symbols and signs and markers and monuments” bear witness to the injustices of the former Apartheid government, which relegated Black South Africans to second-hand citizenship. In Berlin, he said, the Holocaust is memorialized all over the city.

Not so in the United States, he said, where “the architects and defenders of enslavement” are still honored as heroes.

He added: “I actually believe that hopelessness is the enemy of justice. When you allow yourself to get helpless about what you can do, what you can achieve, and what can be accomplished, you actually become part of the problem.”

Learn to be uncomfortable

“We cannot change the world if we aren’t willing to do things that are uncomfortable and inconvenient,” he said.

Stevenson said he knew of no examples where “justice prevailed and liberty triumphed…and no one had to do anything uncomfortable or inconvenient.”

In a brief interview with QCity Metro, Stevenson said he was happy with how he was depicted on the big screen, though he acknowledged being apprehensive when filmmakers first approached him with the idea.

Stevenson said the creative team – director Dustin Cretton, actor/co-producer Michael B. Jordan and Stevenson himself — “were all aligned in trying to do [the movie] right.”

That commitment, he said, extended to cast members as well. He noted Jordan in particular, who portrayed Stevenson in the movie.

“He’s so talented, but he’s also really committed to these issues, and for me that adds a layer of credibility to his performance,” Stevenson said.

Voices from the audience

Tiffany Pauls, a senior at Davidson, said hearing Stevenson’s lecture triggered some of the same emotions she felt while reading his book. “Being in college, it isn’t easy to stay hopeful when you are taking all these classes, learning about injustice, while simultaneously watching your college not acknowledge the narratives of how this institution was founded on the basis of slavery,” she said.

Ron Potts, a member of the Smithville community in Cornelius, took notes during Stevenson’s presentation. “A lot of things he said really hit to heart,” Potts said. “I’m in the fight for justice for my community; we are fighting gentrification, and his words are encouraging me to keep going.”

Linda Gromko, also of Cornelius, expressed similar sentiments: “I’m going to be more hopeful. I’m not going to be hopeless anymore,” she said.

Lizzie Kane is a student at Davidson College.