This article was first published in our Morning Brew newsletter. Sign up today. The Charlotte City Council voted yes on Monday. […] 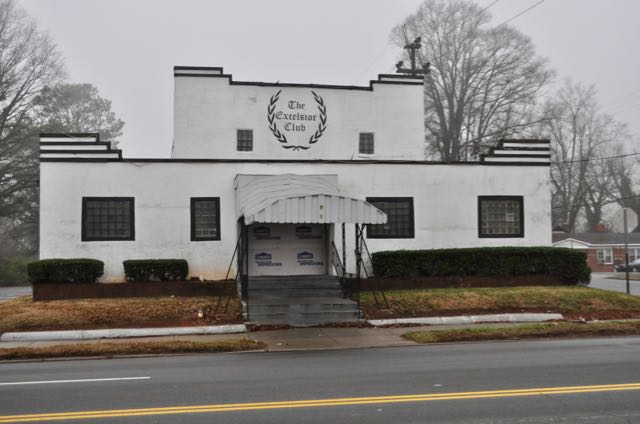 The Excelsior Club, located on Beatties Ford Road about one-half mile north of the main entrance to Johnson C. Smith University, was for many years the leading private Black social club in the Southeast, and one of the largest of its kind on the East Coast. Photo: courtesy of Charlotte-Mecklenburg Historic Landmarks Commission)

This article was first published in our Morning Brew newsletter. Sign up today.

The Charlotte City Council voted yes on Monday. Then, last night, the Mecklenburg Board of County Commissioners also approved spending taxpayer dollars on a private plan to redevelop the Excelsior Club into an entertainment complex.

Under the plan, city and county each would contribute $50,000 to assist California developer Kenwood Investments in purchasing the property, which sold for $1.35 million. The Knight Foundation will contribute an additional $50,000, in addition to a $100,000 contribution from Foundation For The Carolinas.

In an interview with Qcitymetro, city council member James Mitchell said the public/private money was needed to bridge a gap between what the developer was willing to pay for the property and what the seller, state Rep. Carla Cunningham, was willing to accept.

Why it matters: The Excelsior Club, located on Beatties Ford Road, has long been a landmark in Charlotte’s developing Black history. Established in the 1940s during an era of Jim Crow segregation, it became a place where Charlotte’s Black elite could go to enjoy music, food and unwind. In later years, the club became a place for fish fries, political events and community gatherings. The club had fallen into disrepair and closed its doors in 2016.

For some residents, the decaying structure became a symbol of frustration — proof, they said, that elected officials were unwilling to invest in Black Charlotte, even as other projects in other parts of town got funding and popular support. Mitchell, who grew up on Beatties Ford Road, said saving the club became, for him, a “personal” mission.

The plan: In an area of town that has seen little of the city’s economic prosperity, the California developer has plans to build an entertainment complex, complete with a “boutique hotel,” restaurant, music venue and parking deck. Officials said they hope the project will spark more private investments in the corridor, now known as Historic West End.

The city and county have given the developer five years to either complete the project or return the cash.

The bottom line: City officials said the club is too far gone to be saved. Rather, plans call for incorporating its facade into the new construction.