Starting today, McFadden will partner with the nonprofit group You Can Vote to inform county inmates about their rights to cast ballots in the November election. 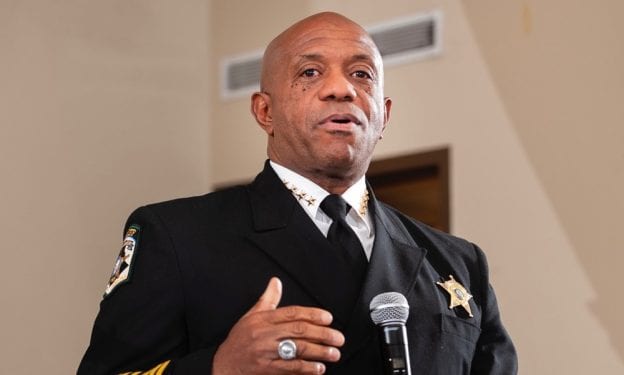 Mecklenburg Sheriff Garry McFadden addresses an audience after he was sworn in, December 4, 2018. Photo: Jonathan Strayhorn.

This article was taken from today’s Morning Brew newsletter. Sign up to have Morning Brew delivered to your inbox.

Mecklenburg Sheriff Garry McFadden is taking voter education into county lockup. Starting today, he’ll partner with the nonprofit group You Can Vote to inform county inmates about their rights to cast ballots in the November election.

It’s the latest in a string of moves McFadden has made since he was elected sheriff in 2018. In the year since then, he has restored in-person visits at the county jail, opened a jail barbershop where inmates can learn a skill and, most famously, reduced the jail’s voluntary cooperation with federal Immigration and Customs Enforcement (ICE).

McFadden says the county’s jail system must do more to prepare inmates to re-enter society, and voting, he says, is a “critical piece” of that.

Who can vote? In North Carolina, the only citizens who lose their right to vote are those serving felony convictions, and the right to vote is restored when their sentence is completed. That means many of the county’s inmates awaiting trial can vote. Ditto for those held on misdemeanor convictions.

On Sunday, the Mecklenburg jail system held 1,607 people in custody, according to figures supplied to Qcitymetro. Of that total, 213 (13%) were there for reasons related to misdemeanor charges. Another 816 (51%) were there awaiting trial on felony charges.

Volunteers go in: After passing a background check and getting four hours of training on the fundamentals of being inside a detention center, volunteers representing You Can Vote will visit inmates to inform them about state voting laws and how they apply. Inmates who will still be jailed on Election Day will be given an opportunity to request an absentee ballot if they qualify.

“Voting is a critical piece of re-engaging with civic life and the work of our democracy,” Kate Fellman, founder and executive director of You Can Vote, said in a statement.

Did You Know? The next election is scheduled for Nov. 5. The deadline to request an absentee ballot is Oct. 29. Same-day registration is permitted at early voting sites during the early voting period. Otherwise, the registration deadline is Oct. 11.

Click here to read the rest of today’s Morning Brew.