All-Black orchestra showcases tunes that speak to the culture 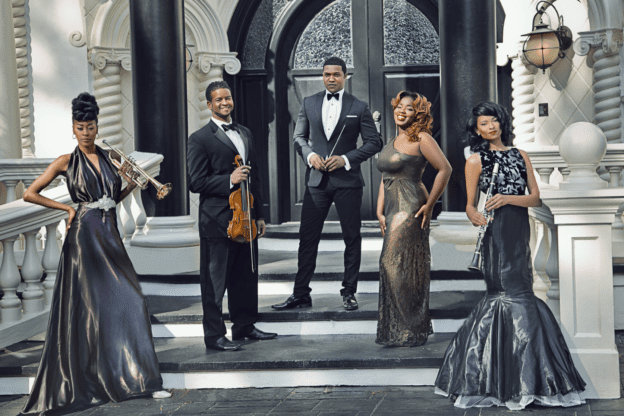 Jason Ikeem Rodgers, founder and music director for Atlanta’s Orchestra Noir, has captivated audiences with his fusion of classical music and contemporary genres like hip-hop and R&B.

But, Rodgers found himself in a space that was lacking diversity — it was overwhelmingly white, older and wealthy. The industry was also dealing with economic challenges. In 2012’s “The Perilous Life of Symphony Orchestras,” a Stanford University study discovered that all orchestras operate at a deficit. Not to mention, concert ticket sales weren’t covering expenses, and symphonies weren’t appealing to younger audiences.

“For the past 20 to 30 years, the symphony has been dying,” he said. “I think hip-hop and R&B within the symphony is a great way to revive an old art.”

Rodgers was heavily influenced by music while growing up in the housing projects of North Philadelphia. His mother and grandmother played piano, and his aunts and uncles were in a gospel group, so he consistently heard faith-based tunes in the house. That environment changed when he hit the streets with his friends. They spit freestyle raps on the corner and listened to R&B. Eventually, his passion for piano would shape his future.

“I would be hanging on a corner with my friends…getting into trouble, doing crazy things and all of a sudden, I’d say, ‘alright man, I got this piano lesson I have to get to. I have to play a Beethoven sonata.’ They respected that because they respected me,” he said.

As a teen, Rodgers recycled this routine over and over again. He would go from hanging with his crew in baggy jeans and a fresh pair of Jordan sneakers to wearing a suit and accompanying his music teachers to listen to Mozart.

“It’s been really cool to get both sides. Ultimately, that’s what Orchestra Noir is. We bring that duality. Sure you’re hearing orchestral instruments and you’re getting the symphony, but you’re also getting the real grit of where hip-hop and R&B comes from,” he said. “I think that’s part of our greatest successes, being able to tell both sides of the story of being African American.”

Rodgers and Orchestra Noir have collaborated with big names in the music industry including rap group Migos, rapper 2 Chainz and producer Bryan-Michael Cox. They will perform in front of a sold-out crowd at Charlotte’s McGlohon Theater on Sept. 20.

“As I do newer concerts, I just want people to be able to listen to orchestral instruments and have a great time…I hope people look at what we’re doing in a different light and not just think, ‘Okay, I see a violin, I see a viola, I got to sit back now and act dignified.’”