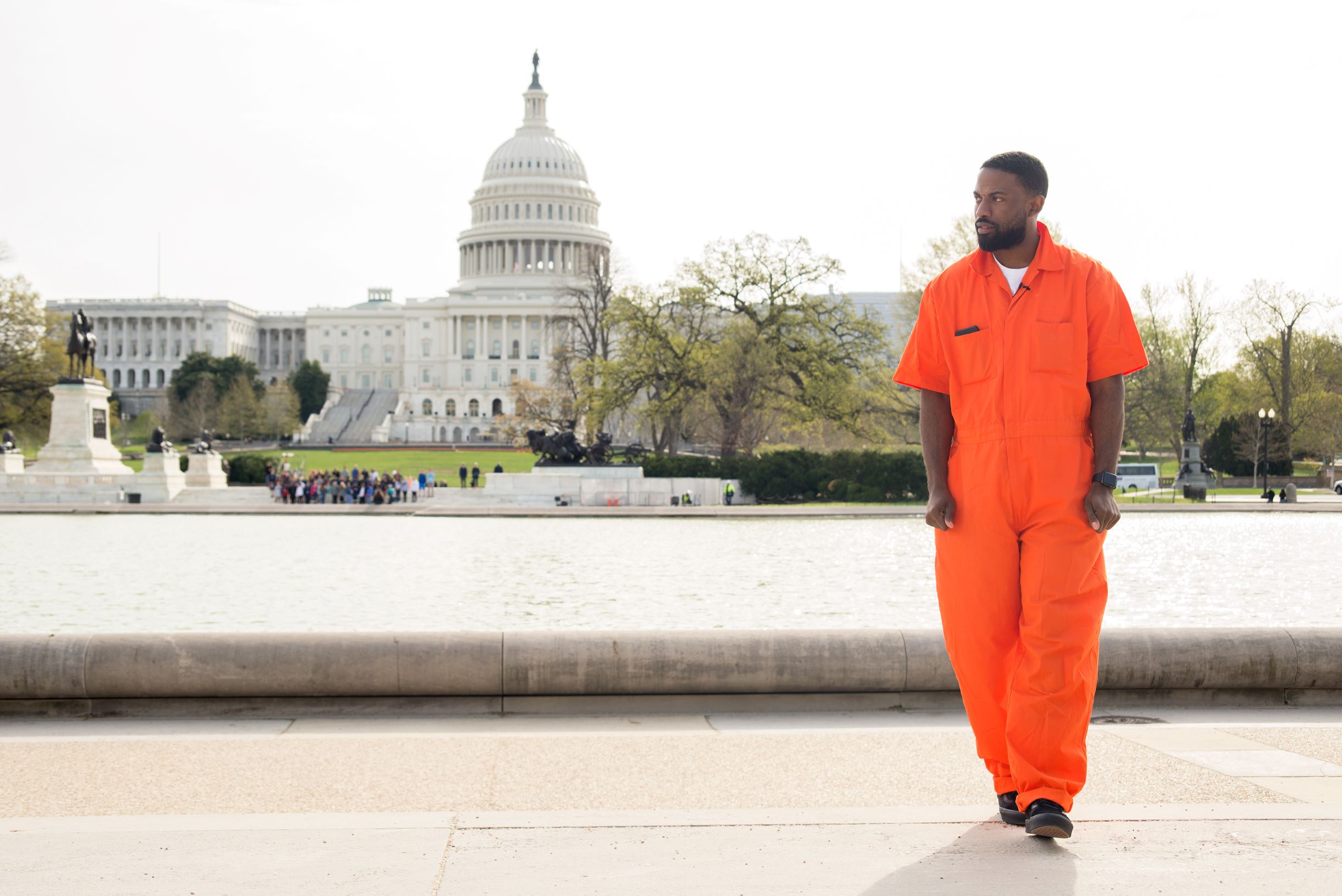 Sherrill Roland may be an Asheville native, but he’s striving to leave a mark on the Charlotte community.

Best known for his work as founder of the acclaimed Jumpsuit Project, Roland is adding two local credits to his rapidly growing — and rather impressive — bio: Fall 2019 Artist-in-Residence at the McColl Center for Art + Innovation and permanent exhibitor at the Harvey B. Gantt Center for African-American Art + Culture.

With a striking combination of lived experience and technical training, Roland’s body of work exemplifies what happens when passion and purpose collide.

A 10-month incarceration while completing his Master of Fine Arts at UNC-Greensboro — after which he was exonerated of all charges — catalyzed his current journey.

In 2016, following his incarceration, Roland created the Jumpsuit Project. It began as a yearlong performance of Roland wearing an orange prison jumpsuit every day leading up to, and during, his graduation ceremony to better understand society’s views toward individuals affected by mass incarceration. The experience opened his eyes to the impact incarceration has on people behind bars, as well as their family and friends.

“Before, my personal voice wasn’t strong in the work. I was a vehicle for sharing the stories of others with the next generation,” Roland said. “Now, I have plenty of personal narratives to give to this work.”

He continued, “The jumpsuit helped expose the hidden prejudices that people have about incarceration. My work is about bringing this conversation into unlikely places.”

Since then, he’s traveled across the country provoking conversations about the deep-seated social and political issues surrounding the culture of the prison system.

His McColl Center residency through Dec. 3, he said, will allow him to further the causes of youth enrichment, community engagement and social justice.

“I feel a strong responsibility to help the next generation go further than I have gone,” he added.

Part of a larger discussion

In addition to open studio hours at the McColl Center, Charlotteans can also connect with Roland and his work through the Gantt Center.

“Fig Leaf on Cell #7, 2018,” which represents facets of his incarceration and re-entry experience, will debut at the Gantt Center in early November. The piece will be featured as part of the Center’s Initiative for Equity + Innovation that leverages art to address issues of unconscious bias, discrimination and social injustice. Roland’s installment follows the initial series, “Welcome to Brookhill,” that focused on the lives of families living in Charlotte’s Brookhill Village and sparked discussions about affordable housing.

“Being an African American art and education space, we focus on Black art a lot…and many times, Black art is political,” said Angie Chandler, manager of educational initiatives and public programs at the Gantt Center.

The Initiative for Equity + Innovation incorporates community conversations to build awareness and bridge the cultural divide. Through the Gantt Center’s free monthly “Talk About It Tuesday” and “Walk Up Wednesday” programming, community members are invited to engage in actionable discourse on a variety of social issues. Roland will be featured in both programs on Wednesday, Nov. 6 and Tuesday, Nov. 19.

“Sherrill couldn’t be here at a better time,” Chandler said. “All of us at some point have a few degrees between us and someone who’s been incarcerated. But, how often do we talk about it?”