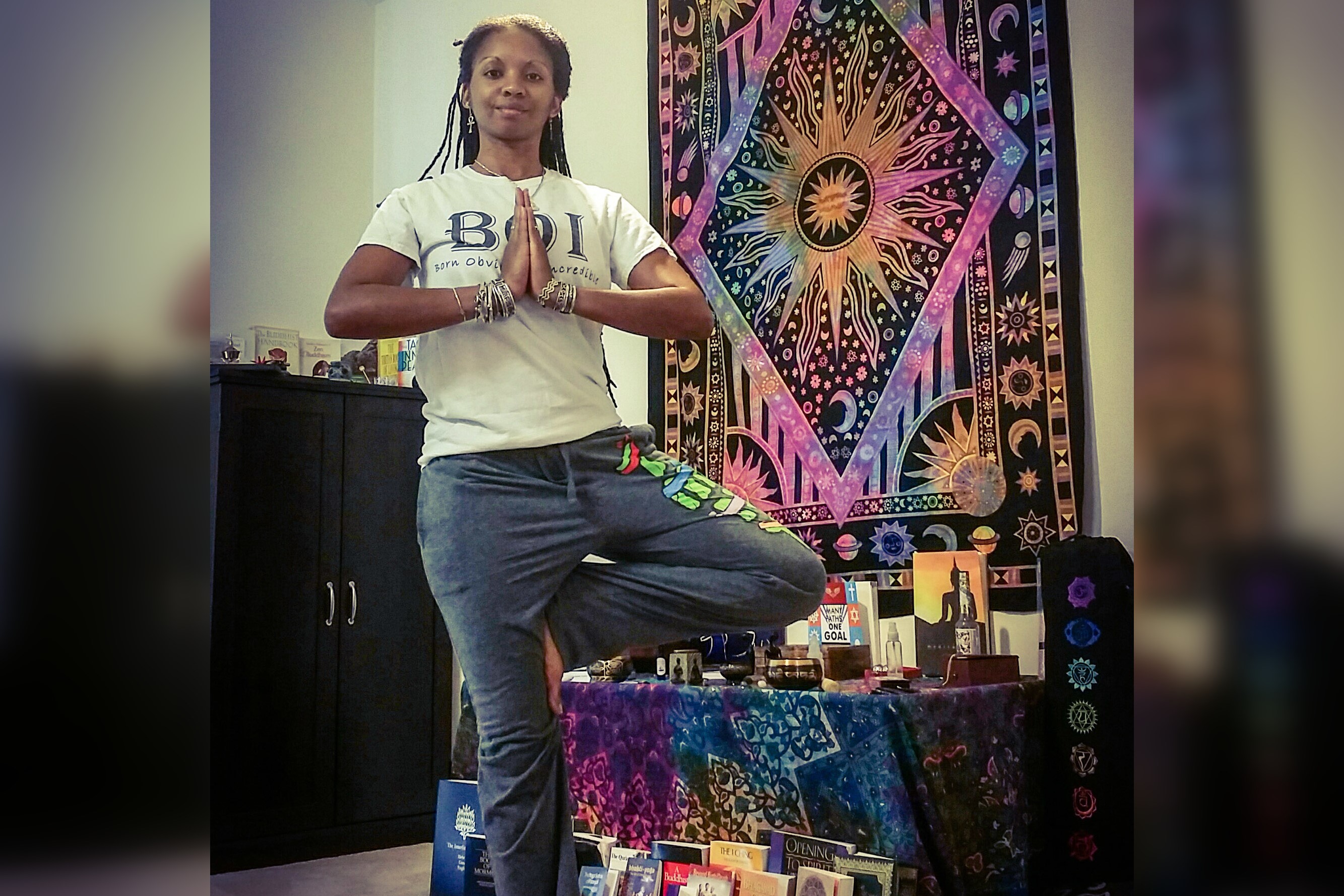 Eternity Philops has always been about building communities that are welcoming to people who look like her: Black, female-identified or nonbinary, queer. With Soul Liberation Yoga studio, she takes things a step further, offering classes and events exclusively for folks who check all of the above.

“A lot of stuff I do is Black-centered but open to anyone of any identity. Anything that is specifically designated as a safer space, however, is exclusive to the population it serves,” she said. “There are some who don’t like that, but typically they are the ones we need safer spaces from.”

Philops uses the newer vocabulary of safer space rather than safe space because she says no one can guarantee the safety of any space.

“Someone might always act the fool or say something triggering, intentionally or not,” she said.

Still, she sets the intention to make it as safe as possible by clearly stating everyone will be respected. RSVPs to her events include a pledge that guests must acknowledge to that effect.

Instances like this reveal her roots as an educator. Philops was already a teacher by profession when she began taking yoga classes in 2016, instructing the blind and visually impaired on computer software and hardware programs. Her grandmother and mother had been teachers as well. Yoga, a holistic healing system created by people of color, she said, was “in alignment with my inner journey.” It felt right.

As she progressed, she began seeking out Black yoga teachers, finding the atmosphere of their classes more resonant with her spirit—she called them “church.” A Facebook post asking people to identify Black yoga teachers in Charlotte yielded an extensive list, and Philops’ wheels began turning on ways to build an organized active community of teachers.

“Because I wasn’t yet a yoga teacher myself, I didn’t feel comfortable starting it. So I put a bug in someone else’s ear and said I could help,” she said.

From that came Black Girl Yoga Magic Charlotte, a close-knit online community that sparked higher visibility for over a dozen Black yoga instructors, their classes and workshops.

“People got to see us in [a leadership] capacity, in a setting we didn’t normally see us,” Philops said. “I helped build that community, not because I knew all those people, but to create a way for people to connect and for non-yogis and non-teachers to connect with them as well. That’s what I like to do. ”

In 2017, she earned two teaching certifications, one in Indian Hatha Yoga and one in African Kemetic Yoga. She began holding classes around the city and opened a private yoga guidance practice. This year, she moved to a larger studio and expanded Soul Liberation Holistic Wellness to include a virtual school.

“Safer spaces exist for a reason. Space, in general, is not safe for everyone,” she said, so BlaQue Folx Chill is “just to have a space where you can come and be your dope, Black, queer self. That’s what it’s about, and that’s what I hope to build–a place for people to connect with each other. It’s my next attempt at community building.”

Philops’ identity has evolved with her practice.

“I’ve moved from labeling myself as lesbian to the more umbrella term of queer because even within the LGBTQ+ scene, things are still very cisgender and heteronormative while queer is much more wide and wild. There’s so much more space in queerness for varied identity,” she said.

When she announced the first BlaQue Folx Chill, a white editor at a prominent LGBTQ+ publication in Charlotte messaged her. The editor acknowledged that she was aware the event was advertised for Black queer folks only but wanted to join anyway, commenting that she’d like to see if she saw anything “worth writing about.”

Philops’ response was swift and public.

“It was so rude and entitled! You don’t…get a pass just because you want an interesting story to write.”

She compared it to flippantly joining a group for assault survivors.

“Why come if you haven’t been through that? Why impose upon them? Everything is not for everybody, and that’s okay… Respect that,” she said.

Her virtual school, Soul Liberation School of Holistic Wellness, is an online education platform that centers Black folks and BlaQue folx in the guidance of yoga and other healing modalities. Its purpose is to help these communities find radical peace, power, and freedom through “higher self knowledge, healing self love, and sacred self care,” she said.

“I want people to have that kind of information without having to pay thousands of dollars to go through yoga teacher training,” Philops said.

“In the yoga studio, you should be learning more than downward dog and warrior poses. You should know what Namaste actually means, instead of just making jokes out of it, like ‘Namaste in bed,’ which is actually really offensive. Yoga is about truth, self-realization, and aspects of nonviolence and speaking truth. There’s so much more to it.”

“Teaching yoga is very fulfilling because yoga is so much more than what we see. When done with complete authenticity, intention and effort, yoga is healing. And it’s healing that Black folks need and healing that queer folks need. That’s why my brand is Black-centered and queer-affirming, because that’s who I’m speaking to,” Philops said.

In the coming months, she’s also considering holding a naked yoga workshop. That one will be a space for any non-men.

“Cis women, trans women, nonbinary beings, anyone who identifies as non-man and preferably Black-identified are welcome. It will be another safer space, especially because we’re going to be dealing with nudity and body issues, so it’s not open to any and everybody. Come, know you’ll be welcome, loved and safe,” she said. “And I’ve got double locks on the doors.”

Emiene Wright is an avid storyteller, journalist and editor creating content on print and digital platforms. She has been published in the NAACP’s Crisis Magazine, North Carolina’s Our State magazine, and The Charlotte Observer.