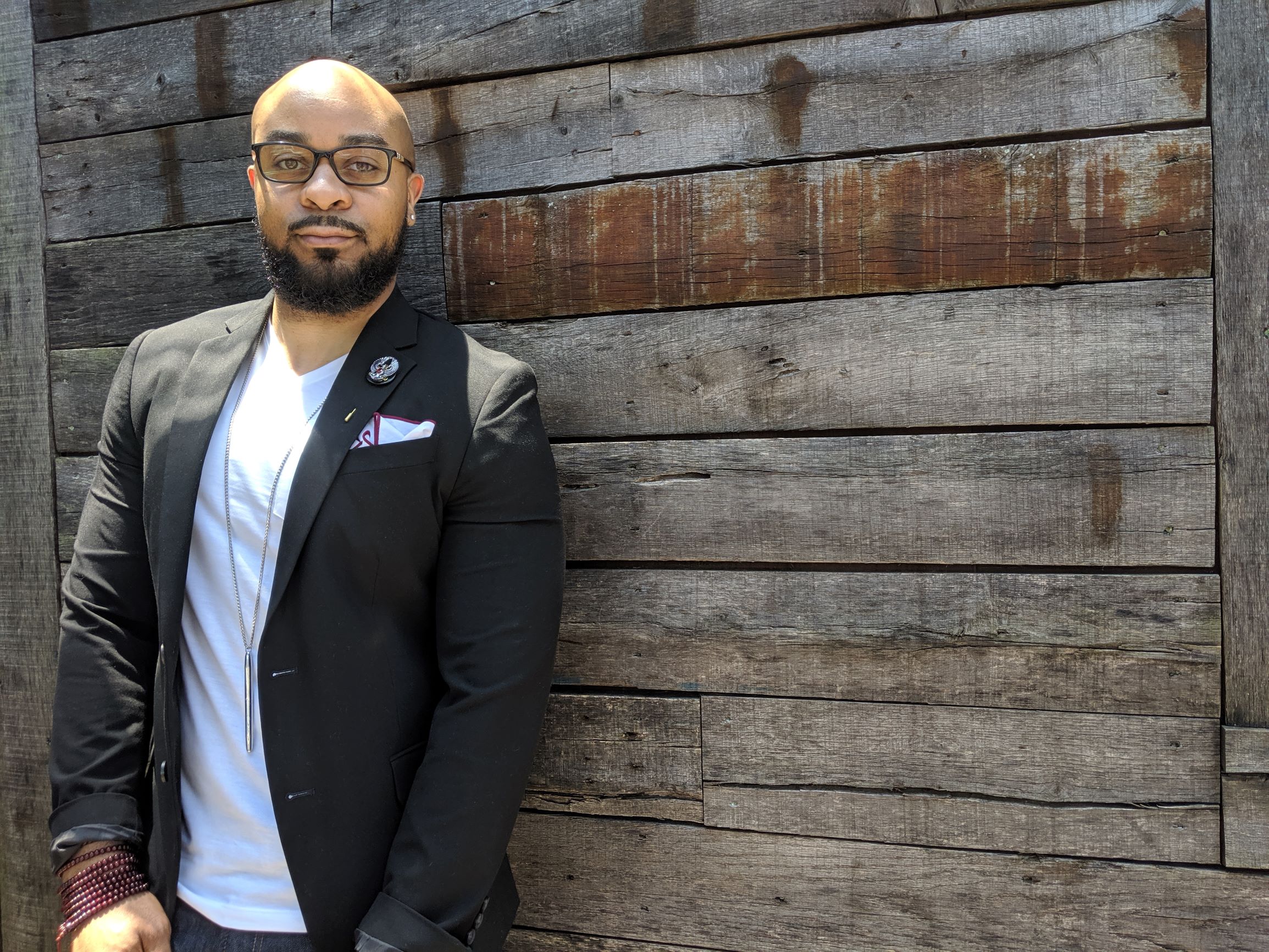 When Jeremiah Allen couldn't find the type of lapel pins he was looking for, he decided to create his own. Allen is the founder of Rook and King custom-made lapel pins. Photo: Qcitymetro

When Kimpton Tryon Park unveiled its ‘Stay Human Project’ last month, the goal was to transform Room 801 into a unique activation that paid homage to the Queen City. Along with the “royal treatment” amenities, room guests are gifted custom-made crown lapel pins created by Rook and King founder, Jeremiah Allen.

It was Allen’s second collaboration with a Kimpton property; the first was a bulk order in November 2017 to commemorate the boutique hotel’s grand opening in Palm Springs, California. The 10-piece purchase was his largest order since formally launching the business a few months earlier. Less than 48 hours later, the hotel purchased another 40 pins.

“I had never heard of Kimpton, I don’t travel much,” Allen said. “I figured it was a smaller business since they were reaching out to me. I looked them up, and I was like ‘holy crap!’ This is a big deal hotel chain.”

The next time he partnered with Kimpton was in his own backyard.

Allen’s surprising situation was “stay ready so you don’t have to get ready,” personified.

“We decided we did not want employees to wear name tags, but now we needed something to identify the staff,” said Robert Hannigan, Tryon Park’s general manager, on how the property connected with Rook and King. “We found him, and he came back with this really elegant, refined piece. We thought it was such a great story that we’ve got this really talented artist making stuff locally. It’s a great talking point.”

When Tryon Park commissioned local entrepreneurs for its Stay Human Project, naturally, they wanted Allen in the mix.

I caught up with the Johnson C. Smith University alum for brunch to talk Rook and King, style and advice to entrepreneurs.

How did you start Rook and King?

I was raised by a tribe of men who were the fedoras, suits, Rat Pack kind of guys. One of my closest uncles, I would always wear his hats when I was a kid and pretend to be a grown-up. As I grew up, I got into fedora hats and suits on my own.

I like the lapel pin accessory, but I could never find quite what I was looking for. I started wanting pieces that had soul. I was taking some time off from work — I was fighting through some pretty massive depression — so I sat down and began to make my own. My first batch was absolutely terrible, but it worked for me. I continued the activity because it was therapeutic. People began asking me about where I got the pins from. As the designs began to evolve, inquiries began to come in.

How many pins do you have in your collection?

What’s the price range for them?

The most inexpensive is the Word Play pins, like a Scrabble tile. It’s about $15. There’s a Bastet — an Egyptian deity — and the eagle crest of the deity Horus, those are both $80. The most consistent price point is around $50.

How much time do you spend working on Rook and King in a week?

Two to three hours a night. I’m a writer for learning and development by day and an entrepreneur all the rest of the time in my life. It’s me and my 12-year-old son, so while he’s studying and doing his homework, I may be at the desk working on my designs.

How would you describe your style?

If I didn’t know what your “vintage-inspired gentleman” style looked like, which male celebrities come closest?

The first person comes to mind is Ghost from “Power” (laughs). I liked what Ne-Yo was doing with the Year of the Gentleman theme, with the brims and different suits.

Now that you’ve experienced working with big business, are you looking into doing more collaborations like that?

I’ll tag different celebrities, trying to get their attention. The celebrity I did get a response from was Sterling K. Brown. He has my Om II. I love him on “This is Us.” I said, this is about to be a big deal, and I never saw it.

Maybe two months later, Cam Newton’s people reached out to me. They were like, we need these pins tomorrow. I was able to provide two out of three. It was the royalty piece, and the one I’ve seen him wear a couple of times was the Hamsa Hand.

What advice would you give to entrepreneurs?

The best way to answer that from my experience is to remain productive and just do what you can. Whatever your product is, be sure that your aim is to be dope. You have to start somewhere. Stay on the path. Nipsey Hussle said it’s a marathon.