‘Real men’ do care for their health; witness these two

On average, men in the U.S. die about five years earlier than women of the same age. Worldwide, that disparity […] 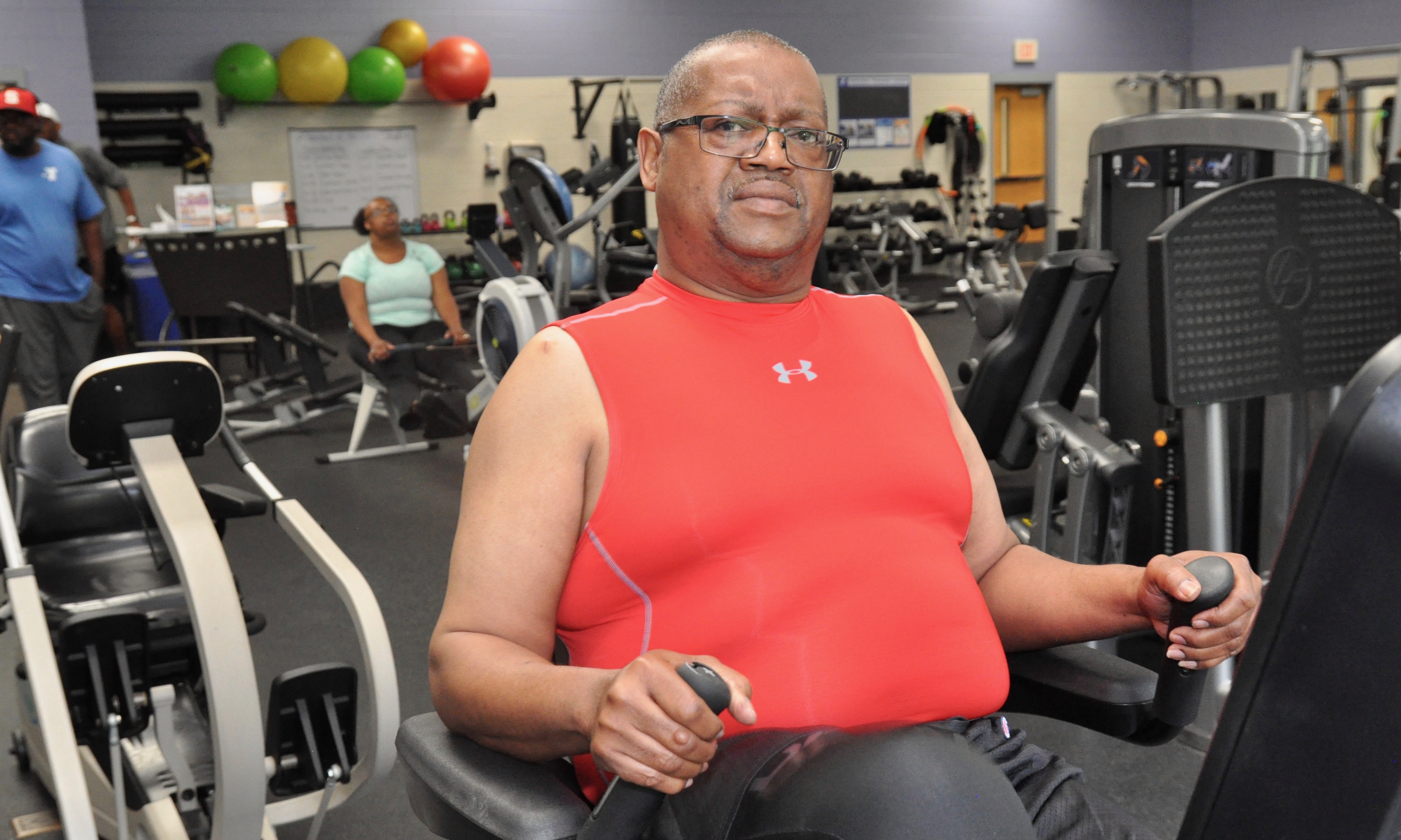 Michael Floyd works out at the McCrorey YMCA in Charlotte, NC. (Photo: Qcitymetro)

On average, men in the U.S. die about five years earlier than women of the same age. Worldwide, that disparity is closer to seven years.

No, says Dr. Sheila Clark Stallings, a board-certified family medicine physician and medical director at Blue Cross Blue Shield of North Carolina. Much of that difference, she says, can be traced to lifestyle choices and how some men approach their health.

Aside from having more dangerous jobs and engaging in more risky activities, men, in general, simply don’t take care of their bodies the way many women do.

“I think a lot of the reasons for early death is because men are not getting treatment early on,” Stallings said. “A lot of times it’s that stigma that real men don’t seek medical care – ‘Oh, I can tough it out. No big deal.’”

As Men’s Health Month draws to a close, we spoke with two Charlotte men who decided, with help from their wives, to make dramatic changes in how they care for their bodies. Both are members of the Village HeartBEAT program, a Mecklenburg County Health Department initiative that works with black and Latino churches to improve the overall health of their congregations.

Three years ago, Michael Floyd had trouble seeing himself living another two years.

His weight had risen to more than 300 pounds and he was swallowing 13 pills a day – medication for cholesterol, high blood pressure and diabetes. At night, he went to bed with a CPAP machine because of sleep apnea.

“When I come home, all I wanted to do was get in a chair and sit down,” he recalled. “It was just wearing me out.”

And then there was the mental toll, which Floyd said robbed him of “hope for tomorrow.”

“When you don’t have hope, when you can’t see yourself down the line five years from now, what you want to do or where you want to go on vacation or whatever, you’re not even focusing on having a good time with your family,” he said. “That’s a mental state that can really ruin your life.”

Today, Floyd walks daily for exercise and works out twice a week at the McCrorey YMCA. He underwent gastric bypass surgery and is watching what he eats.

He said his road to better health began three years ago when his wife suggested they join the Village HeartBEAT program at Greater Salem Church. He said the program has helped him manage what he eats and has put him on a pathway to weekly exercise.

“I lost a lot of weight, and I started getting to a point where I had the energy to do things,” Floyd said. “I wanted to go work out, I want to go do things in my yard. It’s been a wonderful thing.  I really believe the whole thing with the surgery and then Village HeartBEAT — I mean, that really saved my life. I was going down quick, fast and in a hurry.”

Floyd said his doctor no longer prescribes him medications for diabetes, cholesterol or high blood pressure. And as for the CPAP machine – it’s been packed up and put away.

“I don’t use it at all,” he said. “It’s been a wonderful thing. My health has changed dramatically. It’s a whole lifestyle change –my eating, my drinking. I can’t explain how I feel, but I can equate it to when I was in my 20s. And I’ll be 60 this year.”

Ronald McMullen was vacationing with his wife and two daughters in Pigeon Forge, Tennessee, when he first decided to work on improving his health.

Tipping the scales at more than 400 pounds, he was unable to join his family on rides at an amusement park.

“Ever since then,” he said, “my goal has been to lose weight.”

So far, through a combination of healthier eating and regular exercise, McMullen has dropped 76 pounds, with a goal to reach 280.

McMullen, 35, stands six-feet-four-inches tall. He says he has battled weight since his senior year in high school. He attributes much of weight gain to eating too much…and eating too much of the wrong things.

McMullen said he joined Village HeartBEAT at New Zion Baptist Church after some of the men there noticed him losing weight and invited him to become a part of the church’s health ministry.

McMullen also credits his wife, who has been willing to cook special meals just for him to aid his new eating habits, which include more fruits and vegetables.

“She always motivates me to be the best person I can be,” he said.

McMullen said his journey to better health has not been easy – he tries to walk three to four miles a day and, at night before bed, he often does sit-up, push-up, leg lifts and crunches.

McMullen paused, as if searching for the right words.

“How can I put it? I want to eat the way I used to eat, because I liked it,” he added. “But now I have to look toward my family. If I eat this way, will I be here for a long period of time for them?”

And then there is the exercise.

“I even had myself asking God, was this necessary, was this worth it?” he said. “It was so much with all the workouts and sweating, and you’re tired.”

McMullen paused again and thought some more: “But every day since I kept doing it, my body has gotten stronger and healthier,” he said. “I see the benefits of it… I’m looking at life different… I’m doing more with my kids now.”

As for women who have men in their lives, encourage them to be proactive.

“We as women need to make sure that we approach them with love and encouragement and being supportive and truly explaining our concerns on wanting them to live a healthy life,” she said.

“Late intervention can lead to a poor quality of life,” Stallings said. “So the take home would be: get checked. Just because you feel fine does not mean that you are fine.”