HBCU Digest: Bennett College says ‘thank you’ to 18 first-graders who donated $115 in quarters 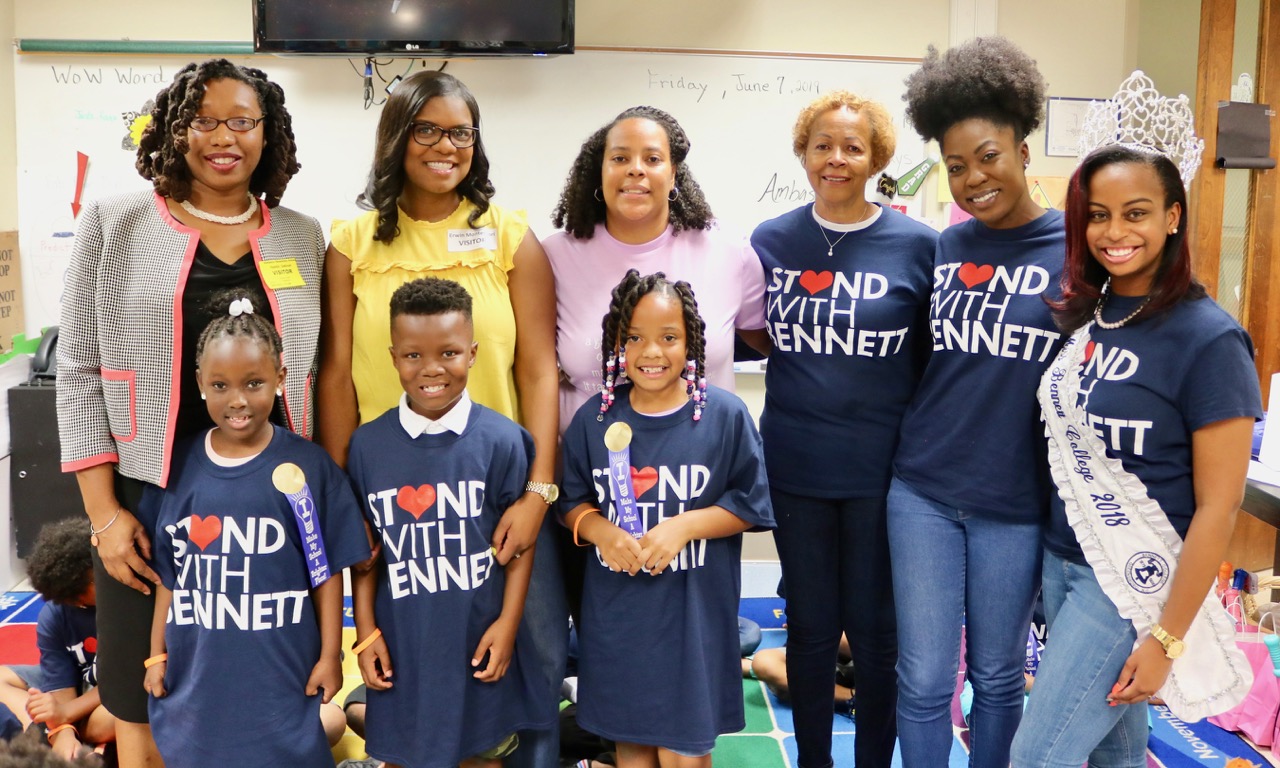 Bennett College threw a pizza party last week for 18 first-graders at Erwin Montessori at Alamance Elementary School who donated $115 in quarters to the #StandWithBennett campaign.

The national campaign to keep the Greensboro college open began on Dec. 11, 2018, and raised about $9.5 million over 55 days.

The pizza party began with a “moving up” ceremony to celebrate the student’s promotion to second grade. (The students were taught by Karen Wallace and her assistant, Diana Liinangi.)

Bennett President Dr. Phyllis Worthy Dawkins encouraged the students to believe in themselves.

“I grew up in the projects, in public housing in Asheville,” Dawkins said. “One day when I was in the fourth grade, one of my adult cousins said to me, ‘you’re gonna be somebody someday.’ That set a vision in my head.”

In addition to pizza, the children also were given StandWithBennett T-shirts.

The pizza they ate came from Papa John’s, which established a relationship with Bennett after The Papa John’s Foundation donated $500,000 to the #StandWithBennett campaign.

The Blue Bears football team was given the CIAA’s Highest Team Academic Award for the 2018-2019 year. The award is given each year by sports category to teams with the highest grade point average.

The Blue Bears football team had a cumulative GPA of 2.89. It was the second straight year they won the award.

“This is a tremendous honor for our student-athletes,” Head Coach Daryl Williams said in a statement issued by the school. “We are very pleased and proud of our student-athletes’ academic achievements. The coaching staff does a great job of helping them to stay focused and pointed in achieving their college degree.”

NCCU’s Juvenile Justice Institute found a “steady reduction” in the number of arrests for low-level crimes in Durham from 2007 to 2016.

The study, conducted in partnership with Durham Police Department, found that misdemeanor arrests dropped by 50.9 percent over the covered period, compared to a 43.6 percent drop in felony arrests.

Lorraine Taylor, who directs the NCCU Juvenile Justice Institute, told Qcitymetro the Durham study did not look for factors that might have contributed to the decline in misdemeanor arrests. However, she noted he Durham County’s Misdemeanor Diversion Program, which seeks to keep young offenders out of the criminal justice system.

The findings were released May 17 in the Albert Turner Law Building on NCCU’s campus.

The Juvenile Justice Institute was among six partners chosen in 2017 to participate with the Research Network on Misdemeanor Justice in New York in researching the impact of police enforcement on lower-level criminal offenses. All six sights showed a similar decline, Taylor said.

The Orangeburg, S.C., school has scheduled a press conference for 12:30 p.m. on Monday, June 10. Claflin has been conducting a nationwide search for a new president to replace Dr. Henry N. Tisdale, who is retiring after 25 years.

Check back for an update.

FYI: Did you know that Claflin is now part of the CIAA?