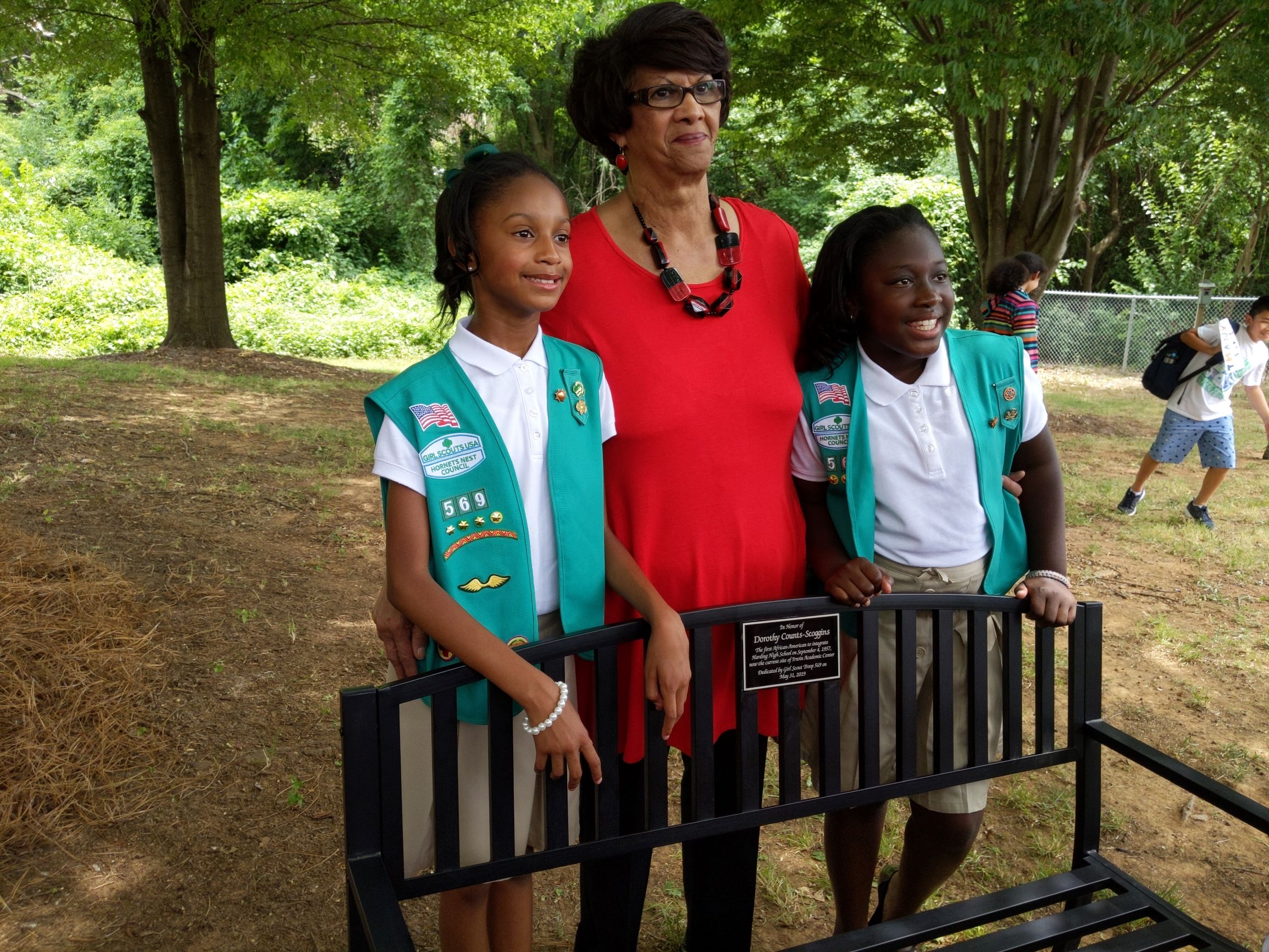 In 1957, 15-year-old Dorothy Counts-Scoggins endured harassment and insults as she walked down a hill to become the first African American student at the all-white Harding High School.

“That day was not a good day for me, but that day will always be a part of my life because it’s something that led me to be the person that I am today,” she said.

Irwin Academic Center is now located where Harding once stood. On Friday, 77-year-old Counts-Scoggins took the same one-block walk down the hill. But this time, she was greeted by students, staff and parents holding handmade signs with encouraging messages. She was getting a do-over to commemorate her entrance into Harding.

As she made her way to the steps of the school, Counts-Scoggins walked hand-in-hand with 10-year-olds Maya McClain and Morgan Winston. The two fifth-graders organized the event and dedicated a bench to Counts-Scoggins as a small way to make amends for history.

A do-over for a dark piece of Charlotte history

McClain and Winston are members of the Girl Scouts, Hornets’ Nest Council Troop 569 at Friendship Missionary Baptist Church. The idea to honor Counts-Scoggins started as an opportunity for McClain to earn her Bronze Award, the highest honor a Girl Scout “Junior” can achieve.

“I found this idea called the Buddy Bench project, and since my school is formerly Harding High School, I thought it would be a smart decision to dedicate a bench to Dorothy Counts to honor her for what she’s done,” McClain said.

She asked Winston, who is Irwin’s student council president, to join her with the project. The classmates held several bake sales at their school to raise funds for the bench. After scheduling a meeting with Lowe’s Home Improvement, the retailer donated the bench.

Winston’s dad, Earnest, said the girls decided to give the money from the bake sale to the school. School officials said the funds will be used to help students needing help to pay for field trips.

Winston knew the project would take hard work, but that didn’t stop the “Juniors.”

“It is because of her courage that I can now walk through the front door of Irwin Academic Center because it is no longer segregated,” she said.

McClain and Winston officially met the civil rights pioneer earlier in the week, and it brought her to tears learning about the girls’ project.

“When they told me they were planning this all by themselves, it says to me that everything that I endured here at Harding has made a mark on two young women in Charlotte,” Counts-Scoggins recalled.