Charlotte natives Steph and Seth Curry will compete against each other as the Golden State Warriors and Portland Trail Blazers match up in the NBA Western Conference finals. 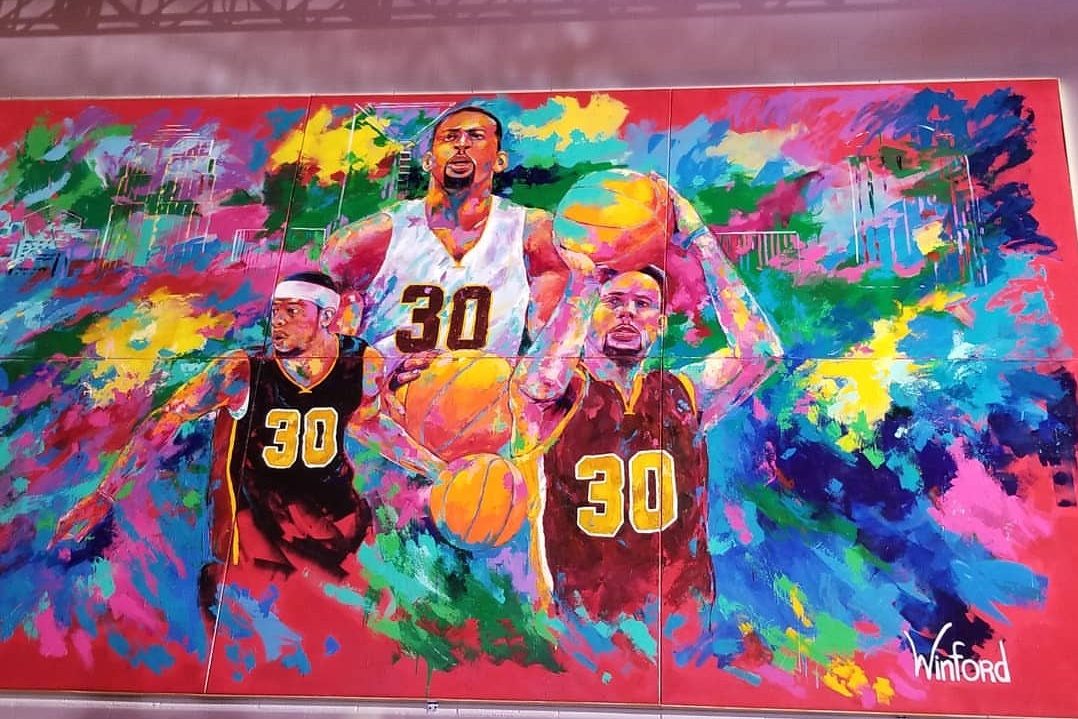 A mural featuring Dell, Steph and Seth Curry hangs in the basketball gym of the Carole Hoefener Center in Charlotte. Photo: Qcitymetro

Brothers, and Charlotte natives, Steph and Seth Curry will make history when Game 1 of the NBA Western Conference finals kick off on Tuesday. The Currys become the first brothers to face each other in an NBA conference final as 28-year-old Seth and his Portland Trail Blazers try to dethrone defending champs, the Golden State Warriors, led by 31-year-old Steph.

Seth & Stephen Curry will be the first brothers to ever play each other in a conference finals. pic.twitter.com/49AyK5HXmc

Their parents, Dell, a former Charlotte Hornet and current TV analyst for the team, and wife Sonya, are flipping a coin to determine which point/shooting guard son to root for in the series.

Shooting basketballs, especially from the three-point line, is a commonality among the Currys as Dell, Steph and Seth can all shoot daggers from beyond the arc. The brothers have been competing since they were tikes. Dell would often take his sons with him to shootarounds and warm-ups, where they would play one-on-one.

Curry brothers are looking forward to it

“It’s a dream come true for the both of us,” Seth explained to ESPN about the chance to play against his older brother.

Mom Sonya wasn’t shy about what this upcoming series meant for her family, describing it as a win-win situation.

The brothers’ paths to the NBA were dissimilar. Seth went to one of the premier colleges in the nation, Duke, while Steph went to the relatively unknown Davidson College. Both had ample success in college, with Steph leading the Wildcats to the school’s first Elite Eight appearance since 1969, and Seth helping the Blue Devils get to multiple NCAA Tournament appearances during his three years there.

While both had college success, Steph was the only brother drafted to the NBA. Seth had to work his way up to the NBA through the NBA Development League, now called the G League. Steph went on to win two NBA MVP awards and three NBA championships. Seth is looking to help the Trail Blazers win their first championship since 1977.

The last time the two Currys competed against one another was at this year’s MTN DEW 3-Point Contest during NBA All-Star Weekend. Neither brother came away with the victory, despite Steph making it to the final round of the contest.

Family affair in the hometown ❤️

There’s only one certainty after this series, there will be a Curry brother competing in the NBA Finals this season. If I were a betting man, I’d pull for the underdogs, which would be the Trail Blazers based off their regular season record and lack of experience in the playoffs. While this is a win-win for the Curry family, it’ll also be a win-win for the millions of viewers tuning in to watch history being made.

And to throw in another interesting storyline: The Eastern Conference finals will also have a set of brothers on the rosters. Marc and Pau Gasol will make appearances with the Toronto Raptors and the Milwaukee Bucks, respectively. However, only Marc will see playing time. Pau is out for the Bucks after undergoing season-ending surgery.

The Curry Brothers and Gasol Brothers’ teams will be matching up in the conference finals pic.twitter.com/hNp3sFMddp

See the schedule below to check out Steph and Seth in the NBA Western Conference finals. All games will be televised on ESPN.