A listening session sparked the idea for Next Level Leadership cohort to focus on mental health of young Black males. 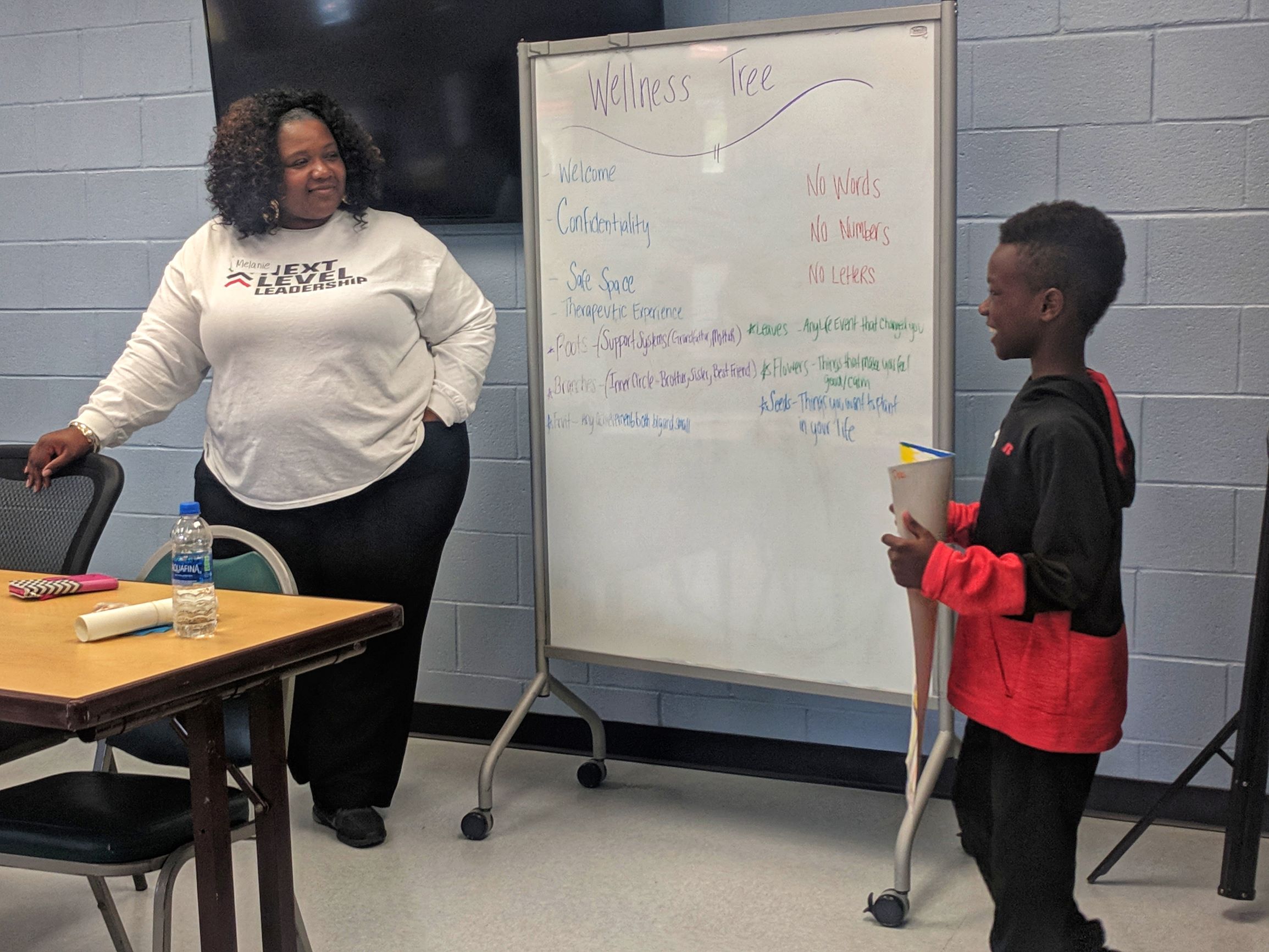 Next Level Leadership member Melanie Rice (right) led an activity centered around expressing emotions through art during the Be Mindful: Saving Our Black Boys event on April 6, 2019. Photo credit: Qcitymetro

Why this story matters: African Americans are 20% more likely to experience serious mental health problems than the general population, according to the Health and Human Services Office of Minority Health. The group is also more likely to experience certain factors, like poverty and exposure to violence, which increase the risk for developing a mental health condition.

This is the second installment of a two-part story that highlights Black male mental health.

In February, licensed counselor and mental health advocate Rwenshaun Miller was a guest speaker for the inaugural class of the Next Level Leadership training program. He shared his testimony of being diagnosed with bipolar disorder and how his journey led him to support others with mental health disorders. He wanted to start having more conversations concerning mental health of Black boys.

“I started seeing a lot of young Black men, especially in the school systems, being labeled with ADHD [attention deficit hyperactivity disorder] or ADD [attention deficit disorder],” Miller said in an interview. He meets with a group of boys at Martin Luther King Jr. Middle School to discuss mental health issues. “They’re quick to label these kids with the diagnosis — and recommendations for them to be put on medications — instead of getting to the root problem. I like to really know what’s going on, especially within our [Black] community.”

Beverlee Sanders, the cohorts’ vice president, said Miller’s talk partly inspired the group to focus on the health and wellness of Black boys as a component of their capstone project.

Becoming more than a statistic

Sanders cited a 2017 Charlotte Observer article which reported that Black students in Charlotte-Mecklenburg Schools were suspended at almost nine times the rate of white ones. She also quoted the “school-to-prison pipeline” statistic that students suspended or expelled for a discretionary violation are nearly three times more likely to be in contact with the juvenile system the following year.

The research revealed what many in the class already knew based on their own experiences. The group wanted to be part of a solution by fostering positive mental wellness in Black boys.

“I actually went to a conference that was talking about how trauma is the No. 1 public health crisis but it’s not spoken about, and how yoga and other things can be used to deal with trauma,” Sanders said. “So we thought, why not have an event focused on black males and teach them how to cope with their emotions better.”

In April, their project came to life via “Be Mindful: Saving Our Black Boys.” About 40 young men, ages 8 to 18, attended the free event where they rotated among three sessions, each tapping into a different area of mental health. In one room, they practiced yoga to clear their minds. In another, a gaming session where the boys used board games like checkers and Jenga to talk about critical thinking and decision-making. But, the most powerful session focused on expressions. The boys created art to share about their life experiences.

A safe space for raw conversations

The young men, along with a handful of parents and guardians, drew “wellness trees” using symbols rather than words and numbers. The exercise was a way to get comfortable with expressing emotions. For example, the tree’s roots represented one’s support system while leaves symbolized an impactful event.

NLL member Melanie Rice led the art session. Rice is a graduate student studying social work at Johnson C. Smith University. At the top of the session, she set ground rules to create a safe space for sharing as much, or as little, as participants wanted. One elementary student talked about constantly gaining friends and then losing them because he moved around. A middle schooler said his teachers were stressors because “they say to give respect, but they don’t always give it.”

Brenda Bowman attended the session with her 11-year-old son, McKenley, who admitted that hanging around the wrong crowd caused his grades to suffer. But, his mom reminded him that he was a leader.

“I started coming out more and being myself,” said the fifth grader. “I stopped hanging around the wrong people and started doing better.”

Participants talked about being thankful that the event provided tools to use when life becomes stressful. For Bowman, it was about teaching her son a bigger lesson and recognizing a reality that many in her community see too often.

“I want him to see there are other people dealing with stuff,” she said. “He’s a Black man growing up in America. I don’t want to see him on the news.”

Tyler Perry admits to being molested as a child