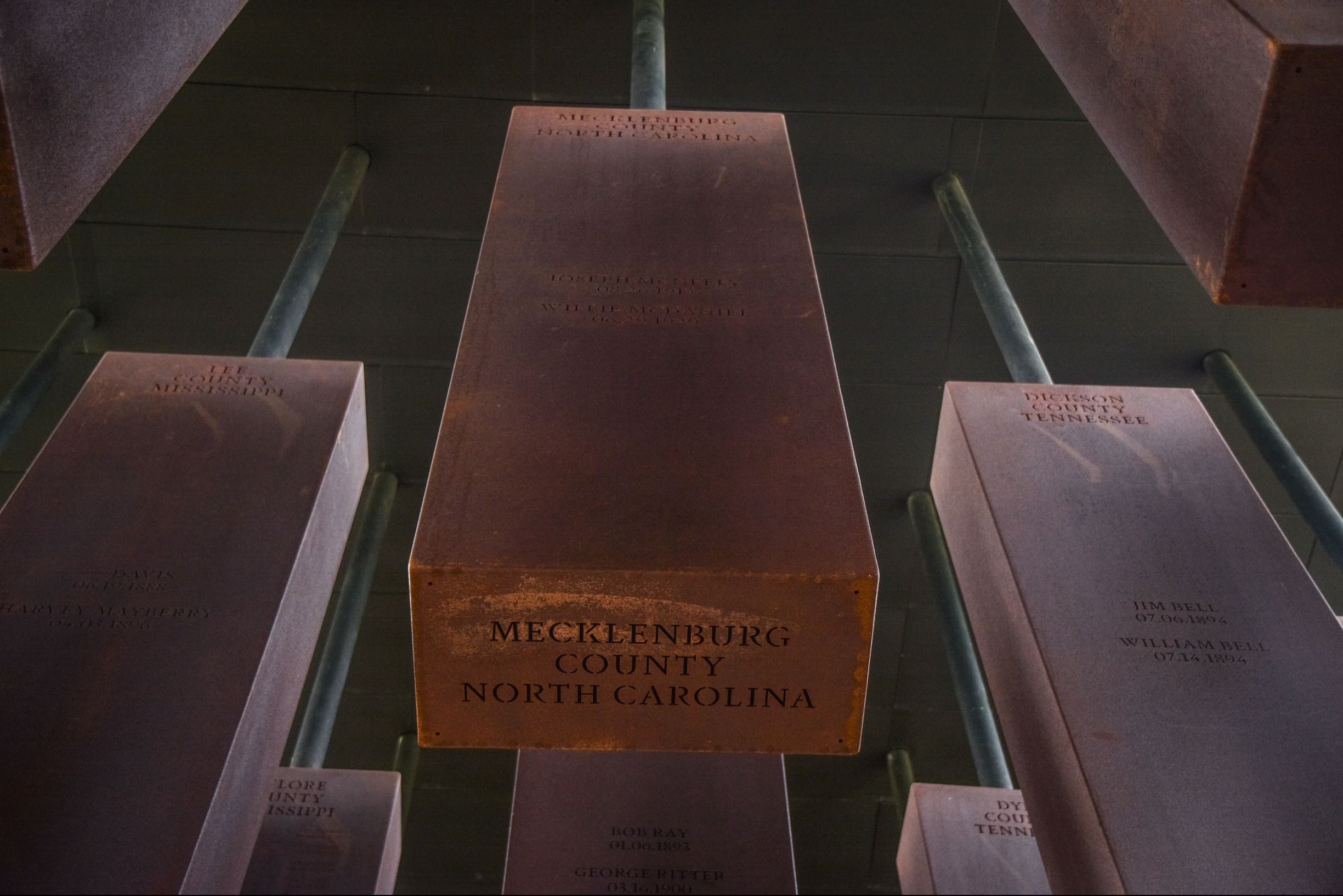 Mecklenburg County monument at The National Memorial for Peace and Justice in Montgomery, Ala. Photo credit: Alvin C. Jacobs, Jr.

More than 4,400 African American men, women and children were lynched in the post-Civil War South. Levine Museum of the New South will chronicle some of those disturbing details, including two known lynchings in Mecklenburg County, as part of its “Legacy of Lynching: Confronting Racial Terror in America” exhibit opening April 25.

The exhibit is the traveling component of Equal Justice Initiative’s research on the history of lynchings — defined as killing someone by mob action (especially by hanging) without a legal trial — and features oral testimonies from descendants of victims. Levine Museum will become the third site to host the exhibit, behind the Brooklyn Museum in New York and Haverford College in Pennsylvania.

“The goal is to continue to have these conversations so that we can understand how we got to this point,” said Willie Griffin, Levine Museum’s staff historian.

Included in the exhibit are details surrounding the deaths of Joe McNeely and Willie McDaniel, two lynchings that happened in Mecklenburg County.

According to the Charlotte Museum of History, McNeely was involved in a police shootout and recovering in Good Samaritan Hospital — the state’s first private hospital exclusively for Black patients, now the site of Bank of America Stadium. On Aug. 26, 1913, a mob of men stormed the hospital, dragged McNeely into the street, then shot and killed him.

The county’s second lynching was near Charlotte, where black tenant farmer Willie McDaniel was found hanging from a tree on June 29, 1929.

According to Griffin, plans are in the works to get historical markers for the victims and a replica of the Mecklenburg County monument at the National Memorial for Peace and Justice.

On April 24, Levine Museum will host its #ShapingCLT program featuring a discussion and book talk with UNC Chapel Hill professor Seth Kotch. Kotch authored “Lethal State: A History of the Death Penalty in North Carolina” and will discuss the connection between the state’s death penalty policy and its relationship to lynching. Attendees will get a preview of the Legacy of Lynching exhibit.

On May 8, the Charlotte-Mecklenburg Community Remembrance Project — the four waves of local teachers, students, corporate leaders, civic leaders and others who traveled to EJI’s Legacy Museum and National Memorial for Peace and Justice — will share details about their trip to Alabama and project updates.

“The teachers are who I consider the real foot soldiers in this process of this project. When they went down in April [2018], they immediately returned to begin designing lesson plans to bring back into the high schools and teach local high school students about this history,” Griffin said. “So they’ll come and present some of the things that they’ve been doing in the classroom.”

He also said EJI founder and executive director Bryan Stevenson will visit Charlotte on May 30 to talk about the work of EJI.