Revel in the music of Duke Ellington, Nina Simone, and jazz artists from near and far as the Charlotte Jazz Festival returns to Uptown Charlotte April 29-May 4. Get your tickets now. 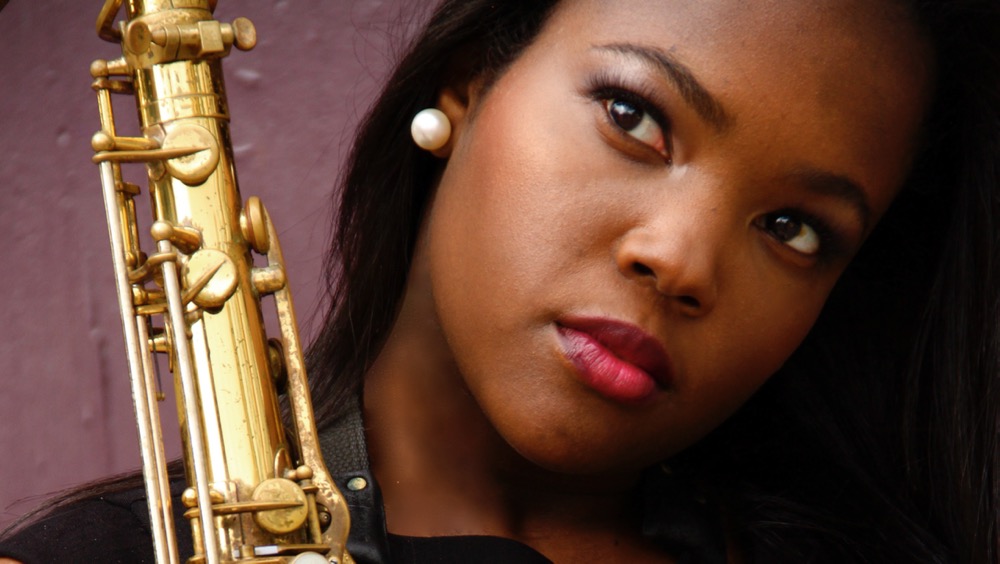 During Charlotte’s fourth-annual celebration of jazz,  you can spend the night with ladies who sing the blues, revel in a showcase of Duke Ellington’s music, party like you’re in Cuba, experience a new composition by jazz great Wynton Marsalis that combines modern dance with big band jazz in a playful exploration of the animal kingdom, and so much more.

Here’s the lineup of ticketed events for the Charlotte Jazz Festival, April 29-May 4.  Enjoy free concerts daily as well. For a complete list of events and more festival info, visit the Charlotte SHOUT! website.

Camille Thurman joins forces with The Darrell Green Trio and jazz legend Wynton Marsalis to kick off the 2019 Charlotte Jazz Festival with an unforgettable night of entertainment.

Acclaimed by Downbeat Magazine as a “rising star” singer with “soulful inflection and remarkable, Fitzgerald-esque scat prowess” and hailed by All About Jazz as a “first class saxophonist that blows the proverbial roof of the place,” Thurman has been amazing audiences throughout the world with her impeccable sound, remarkable vocal virtuosity and captivating artistry. Many have likened her vocal abilities to Ella Fitzgerald and Betty Carter. Her lush, rich, warm sound on the tenor saxophone has led others to compare her to tenor greats Joe Henderson and Dexter Gordon.

Gino Castillo & The Cuban Cowboys bring their Cuban jazz flare to the Jazz tent for the ultimate Latin Jazz dance party. Featuring talented musicians from Connecticut, North Dakota, Venezuela and Cuba, GC & The Cuban Cowboys are known for high-energy performances sure to get you on your feet. Gino Castillo is currently in permanent residency at Prohibition in Charleston, SC, where he presents Havana Nights weekly.

ELLINGTON THROUGH THE AGES: FUTURE OF JAZZ ORCHESTRA WITH WYNTON MARSALIS

Wynton Marsalis, bassist Rodney Whitaker, trombonist Wycliffe Gordon, and saxophonist Dan Block lead an all-Ellington showcase with a group of young rising jazz stars. The band includes 16 of the best young professionals on the scene, many of whom came up through Jazz at Lincoln Center’s Essentially Ellington High School Jazz Band program. This concert explores decades of Duke’s music, including his earliest hits, Hollywood charts, swinging blues numbers, pieces inspired by his international travels, and portions of his later suites. This vital music is at the core of Jazz at Lincoln Center, and you’re guaranteed to enjoy its timeless genius when the next generation of jazz leaders bring their fresh energy to it.

Three talented musicians sing and play the blues all night long in the Jazz Tent. The Donna Hopkins Band, Deva Mahal and Maria Muldaur each perform a full-length set during this blues triple-header. One ticket gets you in for all three amazing performances.

• 9:30 p.m. – Maria Muldaur: Perhaps best known for the 1973 hit song “Midnight at the Oasis,” Maria Muldaur is an American blues singer who was part of the early 1960s music revolution.

Join Jazz at Lincoln Center Orchestra as they present an all-new composition for orchestra and dance by Wynton Marsalis titled “Spaces,” which combines modern dance with big band jazz in a playful and wildly entertaining exploration of the animal kingdom. Each of Spaces’ 10 movements corresponds to a different animal, from “King Lion” to “Bees, Bees, Bees,” offering a dazzling array of sights and sounds that express the diversity, humor, and quirky majesty found in nature.

For this performance, Jazz at Lincoln Center Orchestra will be joined by Bessie Award-winning “jookin” dance artist Myles Yachts and Broadway tap artist Jared Grimes—reprising their roles. Wynton Marsalis does not appear in this performance.

THE GENTLEMEN OF JAZZ:

Tony Award winner Patina Miller, a native of Pageland, SC, pays tribute to the late, great Nina Simone in an evening of unforgettable music. Currently starring on the CBS hit drama series “Madam Secretary,”  Miller is a Tony-award winning actress with a resume that encompasses Broadway, TV, film, and music. She is famous for her role as Leading Player in the 2012/13 Broadway revival of Pippin, for which she won a Tony award. She made her Broadway debut (and earned her first Tony nomination) in the stage adaptation of Sister Act. Miller appeared in the renowned daytime soap opera All My Children, made her feature film debut in The Hunger Games series, and performed her first solo concert at the Kennedy Center for Performing Arts during its 2013/14 theatrical season.