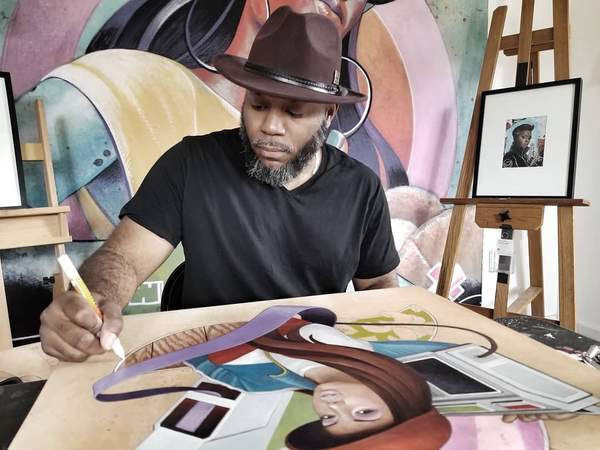 Art, Beats & Lyrics (AB+L) during NBA All-Star Weekend was a true treat for the senses. Participants enjoyed an evening steeped in artistic expression, from the carefully curated Jack Daniel’s Tennessee Honey-based libations to thoughtfully selected pieces representing talent based in Charlotte and beyond.

With a classic hip-hop soundtrack from the ‘90s and early 2000s serving as the backdrop, guests at the Grady Cole Center were exposed to art showcasing a variety of mediums including breathtaking renderings of musical greats like Erykah Badu, Andre 3000 and the Notorious B.I.G. Pieces affirmed the power, beauty and strength of women of color. Innovative use of light and sound technology told a compelling story. The driving force behind the art seen during AB+L is curator – and AB+L co-founder — Dwayne “Dubelyoo” Wright. Wright began drawing at a young age while growing up in Fayetteville. Inspired by hip-hop culture, the East Carolina University graduate used his talents to land gigs with magazines, such as Complex and XXL, and brands like Nike. His commissioned pieces, which includes paintings, illustrations and murals, can be seen at exhibitions across the country.

Although based in Atlanta, Wright says “Charlotte is like a second home” with the Queen City being an annual stop for the AB+L tour. We got a chance to speak to Dubelyoo [pronounced “W”] where he talked about the beginnings of AB+L, his love for Charlotte’s creative community and advice for up-and-coming artists.

What inspired you to become an artist?

I’ve been drawing since I was a kid. I started around the age of 3 or 4, and I just never stopped. I’ve always wanted to be an artist, and never particularly wanted to be anything else but in the arts.

Art, Beats + Lyrics started around 2004. How did it come about? How did you get involved?

My business partner Jabari [Graham] was working at the [UniverSoul] Circus in the marketing department. Around that time, they had some layoffs, and he was one of the people to get let loose. He wanted to do an art show that you provide music, a DJ and hip-hop culture. The tricky part back then was that it was way before social media was hitting. It was kind of hard to find artists that were in the streets.

Plus, people had aliases and nicknames. It’s not like you could just easily look people up. He went out and hit the streets and did his research and he came across me and a couple other artists. We were part of the first show that was at a place called Little Five Points. It was a good show, had a great turnout.

A few months later, we had the opportunity to do the High Museum in Atlanta. That was the first time we actually worked together — organizing the show — because we really didn’t know each other at the time when we started working together. It was a cool experience. We had a chance to pack out the museum.

Fast forward a few years later, we had an opportunity to partner with Jack Daniels. That enabled us to take the show on the road. That first city on the road was Charlotte.

Charlotte was a good test market for us. If you can do what you do on the road, that gives you a chance to fine tune things so that when you come home, you have it all together. Charlotte was always an environment that had a strong creative community. They were pretty forward thinking and had a lot of artists and a lot of energy there.

Charlotte has become our second home. There were some years when we did Charlotte twice in the same year, but Charlotte always been a strong base for the audience. That’s great. The people in North Carolina are awesome, but you know, I’m biased [laughs].

Were you able to bring any of your background experience with magazines and music to curating for Art, Beats + Lyrics?

Coming up in, I wouldn’t say the golden era of hip-hop, but in the era in which we came up in, we’ve had a chance to work with brands, whether it’s corporate or doing illustration or design. You get enough insights on what the culture is all about so that when you do put stuff out there, it’s coming from a sense of authenticity. I think that’s one of the things that really draws people into the show is that it’s authentic.

These are real artists doing real work, and we want people to have a wow factor to connect to each piece. We choose pieces where people get that feeling, you know, instantly drawn to it. Sometimes in art, you can actually have pieces that you have to meditate on a little bit before you have an idea of what it’s about. We want people to come in, get hit with it, enjoy themselves, have experiences and leave inspired.

How important is the cool factor for your shows?

The cool factor is very important. When you come to the show, that cool factor gets people excited. It draws them in, and they want to share that experience with other people. That’s when they tell people and share it on social media. Things like that are very important. So we try to get works that they can see themselves in a different light. That’s really important to us as well. Keep it fun, keep it entertaining and make sure that the audience has a great experience. They feel inspired to create or even support art in their local community.

How does AB+L infuse the culture with some of the social commentary that your art is also known for?

There’s a lot of different artists in the show. Each artist has their own particular take on commentary or whatever topics they want to address. That’s one of the benefits of the shows is that you have so many different voices in there. You can cover a wide range of topics. Even topics that may seem like hot-button issues, it’s not going to be covered the same way from creative to creative. I think that helps in connecting people to the pieces in the show. What advice do you have for up-and-coming artists?

Keep working on your craft. That’s the number one thing. There’s so much to learn. Keep practicing and keep in your sketch books. Keep coming up with ideas.

Another thing I would say is that if you can, travel. I’m not talking about flying across the world. I’m talking about hopping in your car and going to another city and checking out shows there and connecting with the artists. When people think about travel, they think about international travel or traveling across the country. But within miles or hours of Charlotte, there’s a bunch of different cities you can check out. Each one of them have art communities that you can connect with.

Another bit of advice I would tell artists is decide whether you like it or you love it. I say that because you will treat your career differently if you like it and you’ll treat it differently than if you love it. Just like you treat people different who you like and the people that you love. If you decide, “okay, I really love doing this,” you will sacrifice and make moves accordingly.

Katrina Louis contributed to this article.