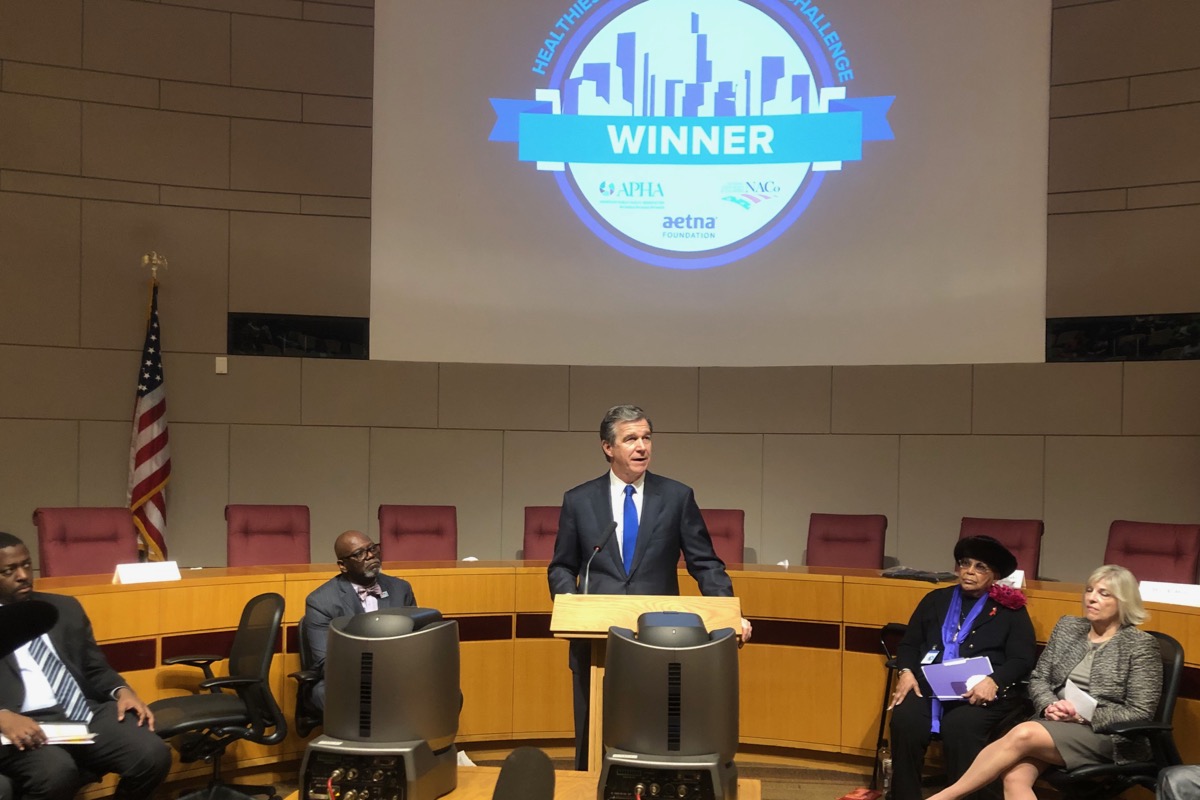 A Mecklenburg County program that aims to reduce the health factors related to heart disease and diabetes has won a $500,000 national competition to continue its work in black and Latino communities.

The Village HeartBEAT (VHB) program was launched in 2014 in partnership with seven local black churches. It has since grown to more than 60 faith-based communities spread throughout the county.

VHB was launched by the Mecklenburg County Health Department as part of the Healthiest Cities & Counties Challenge, an initiative by the Aetna Foundation in partnership with the American Public Health Association and the National Association of Counties.

Why it matters: The Centers for Disease Control and Prevention report that blacks and Latinos are among the populations most at risk for heart disease and stroke. Officials said money from the competition will now be used to expand the VHB program.

Cheryl S. Emanuel, Village HeartBEAT founder and the Health Department’s senior health manager for the office of community engagement, said the grant shows what can be done when communities work together.

In addition to exercise and diet, the VHB program focused on health screenings, weight loss and programs to help participants stop smoking. Each participating church assigned a health “captain” to keep members engaged and motivated. On Saturday mornings, weather permitting, VHB teams could be seen in public parks engaged in group exercise. Congregations and individuals who show the most progress are recognized each year at an annual gala.

Read about some of the people participating in VHB.

Emanuel said that in addition to enhancing current efforts, VHB also may look to include children and childhood obesity.

Emanuel said she was pleasantly surprised by the number of men who joined the program and later took steps to address issues related to substance abuse.

“Village HeartBEAT, it created a place, an open door, an open family environment for them to come in and be able to work around their own dynamics,” she said. “We take care of each other.”

A model for others

At the county’s official announcement on Tuesday, dozens of VHB participants, volunteers and government officials — including Gov. Roy Cooper — packed the Charlotte-Mecklenburg Government Center, where a church organist played as the crowd assembled.

Like others who spoke, Cooper predicted that VHB would become a model for other cities and counties.

“Our families, our communities, aren’t as healthy as they should be,” he said. “And our communities of color are hit particularly hard by heart disease and all the other issues regarding that – diabetes, stroke – things that cause troubles in peoples’ lives.”

He added, “People generally know that eating wrong and smoking and not exercising enough are not healthy. But often what they don’t know are the strategies on exactly how you go about doing prevention work, how you can accomplish your goals and guidance on developing the will to do it. I cannot think of a better place than our churches, our communities of faith, where people can develop that will.”

Cooper, a Democrat, also used the occasion to call for the expansion of Medicaid in North Carolina, a move rejected by the Republican-led General Assembly. He cited Ohio’s Republican Gov. John Kasich as praising Medicaid expansion in his state, saying the decision has reduced by half the number of people dying from opioid overdoses in Ohio.