Once a federal inmate, Cedric Dean will watch State of the Union from House chamber

U.S. Rep. Alma Adams said she invited Dean to be her guest because she wants to spotlight the need for further reform in the criminal justice system. 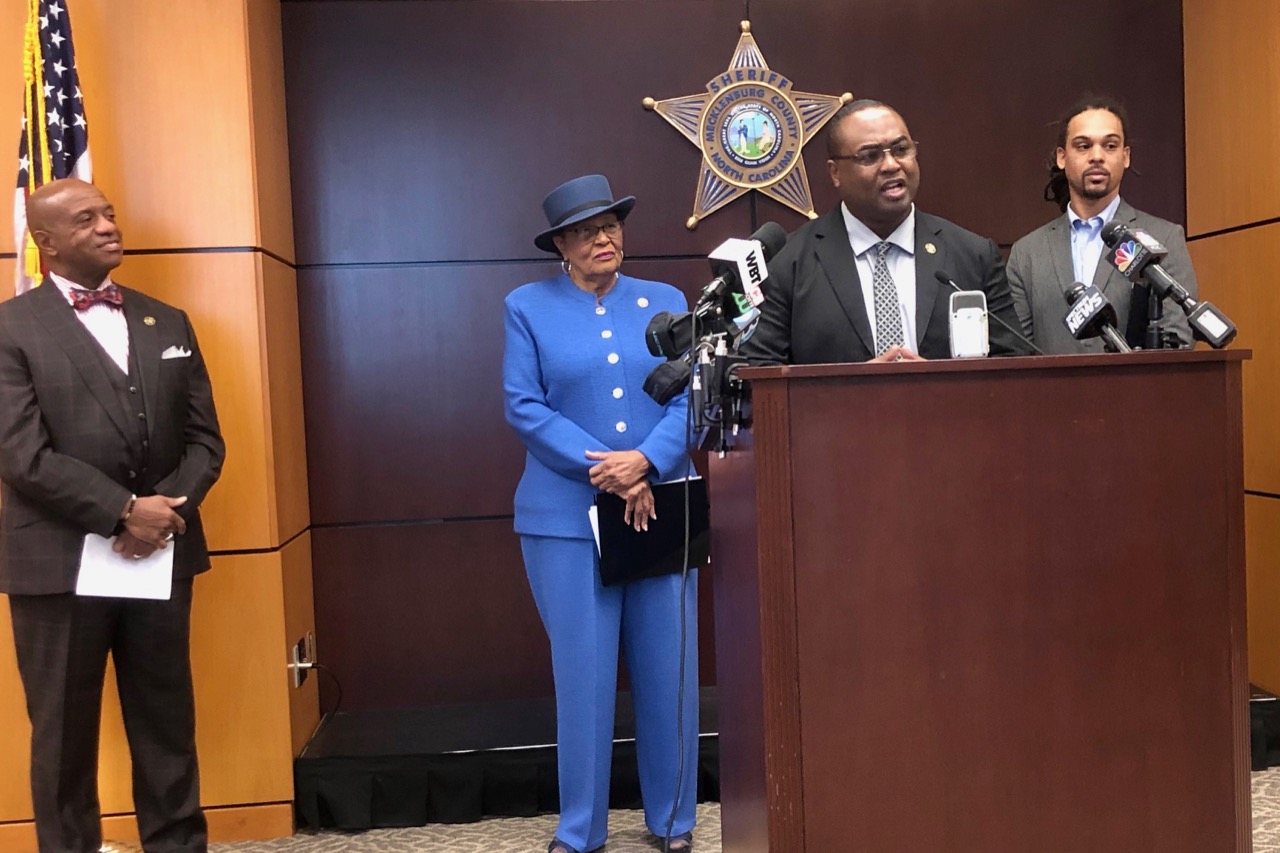 Cedric Dean, second from right, once sentence to life plus five years in federal prison for selling crack cocaine, will be a guest of U.S. Rep. Alma Adams when President Donal Trump delivers his 2019 State of the Union address. (Photo: Qcitymetro)

When Cedric Dean was sent to federal prison in 1994 for selling crack cocaine, he recalled, his sentencing judge warned that even if he spent the rest of his life behind bars and was somehow reborn, he’d still owe the U.S. justice system another five years as an inmate.

On Tuesday evening, that same Cedric Dean will be sitting in the U.S. House chamber when President Donald Trump delivers his State of the Union address, a guest of Rep. Alma Adams of Charlotte, who says she wants to use Dean’s presence to spotlight the need to further reform how low-level crimes are adjudicated.

“We’re only given one (guest) seat in the chamber,” Adams said at a news conference Monday, where she introduced Dean to local media, “so you want to choose it wisely, in terms of what you do with it.”

Why it matters: Statistics show that blacks represent a disproportionate percentage of people locked up in America.

In North Carolina, Adams said, blacks make up 28 percent of the population but 52 percent of the people behind bars on drug charges. (The rate of drug use for blacks and whites is statistically the same, research shows.)

Black women, Adams said, are six times more likely than white women to be incarcerated, and Latina women are locked up at twice the rate of their white counterparts.

“The over-criminalization of poor people in marginalized communities has resulted in more than 13 million Americans being processed for low-level, nonviolent drug offenses or misdemeanors,” said Adams, who represents North Carolina’s 12 Congressional District.

Noting the historic number of women now serving in Congress – 113 after the midterm elections — Adams said she believes the time is right to begin addressing this inequity, which she said strains families as well as law enforcement and the judicial system.

When fathers and sons are locked up and removed from their families, Adams said, “women bear the brunt of the burden.”

By his own account, Cedric Dean was no angel. As a child growing up in Charlotte, he routinely ran on the wrong side of law enforcement. At age 16, he was sent to state prison for armed robbery and served “five years, six months and four day,” he said.

When released, he picked up pretty much where he had left off, but somewhat more proficient at crime for the years he’d spent behind bars. Eleven months later, he was back in the system – this time in federal court, sentenced to life plus five years for selling crack cocaine.

Dean, now 46, said he never lost hope, and he credits others – some inside the prison and others on the outside — who never lost hope in him. He especially credits Mecklenburg County Sheriff Garry McFadden, who, he says, had tried to mentor him since childhood, when McFadden was a Charlotte-Mecklenburg police officer.

“When I went to prison, he was still trying to talk to me, reaching out, writing to me…,” Dean recalled.

Dean said that while in federal prison he began to think differently, and while still locked up, he started an organization he called SAVE — Safeguard, Atone, Validate, Educate -– to work with fellow inmates.

Dean’s hopes for release from prison were fortified in 2010 when former President Barack Obama signed the Fair Sentencing Act, which reduced the disparity between the amount of crack cocaine and powder cocaine needed to trigger certain federal criminal penalties.

Eventually, a judge reduced his sentence, and Dean was released on Nov 29, 2017. (McFadden was among those who had written to the judge on Dean’s behalf and was among the first to visit him at home on the night of his release.)

The organization that Dean started in prison is now an official nonprofit, registered with the same federal government that had once tried to put him away for life. Dean now takes his message of hope and uplift into two CMS schools — Thomasboro Academy and Martin Luther King Jr. Middle School – where he emphasizes “character development.”

A self-described political junkie, Dean said attending the State of the Union address will be a dream come true — he said he literally dreamed of attending the event while still an inmate.

“Redemption is real,” he said. “People can change. I am the empirical evidence.”

Adams said that despite recent passage of the First Step Act — a bipartisan bill aimed at reducing recidivism and refining sentencing laws and harsh penalties — more reforms are needed. She said she hopes to build bipartisan support for legislation that would allocate more money for re-entry and job-training programs for returning inmates.

Part of that effort, she said, would involve working with community groups to better understand what programs are needed.

She referred to this hoped-for legislation as a “Second Step” toward criminal justice reform.

“Over-criminalization and over-processing of crime does not make us safer,” she said. “Instead, it creates mistrust for our criminal justice system. There are communities within our district that have a very real fear of our courts and law enforcement, and that is not okay.”

As for Dean’s trip to Washington, Adams said she had already put him on notice.

“We’ll be moving around from the time we get off the plane tomorrow,” she said. “I can tell you, it’s going to be a very busy day… There are many receptions and other kinds of interactions with members of Congress, so he’ll be following me – he’ll be sort of shadowing me — to attend some of those events, so I told him to have on some good walking shoes and get a good night’s sleep tonight, because it’s going to be a very busy day.”