From Washington to Obama, the Soul Food Scholar tells stories of Blacks who fed First Families

Food writer, attorney and certified BBQ judge Adrian Miller -- aka the Soul Food Scholar -- to visit Charlotte for “Tales of a White House Kitchen” on Feb. 12. 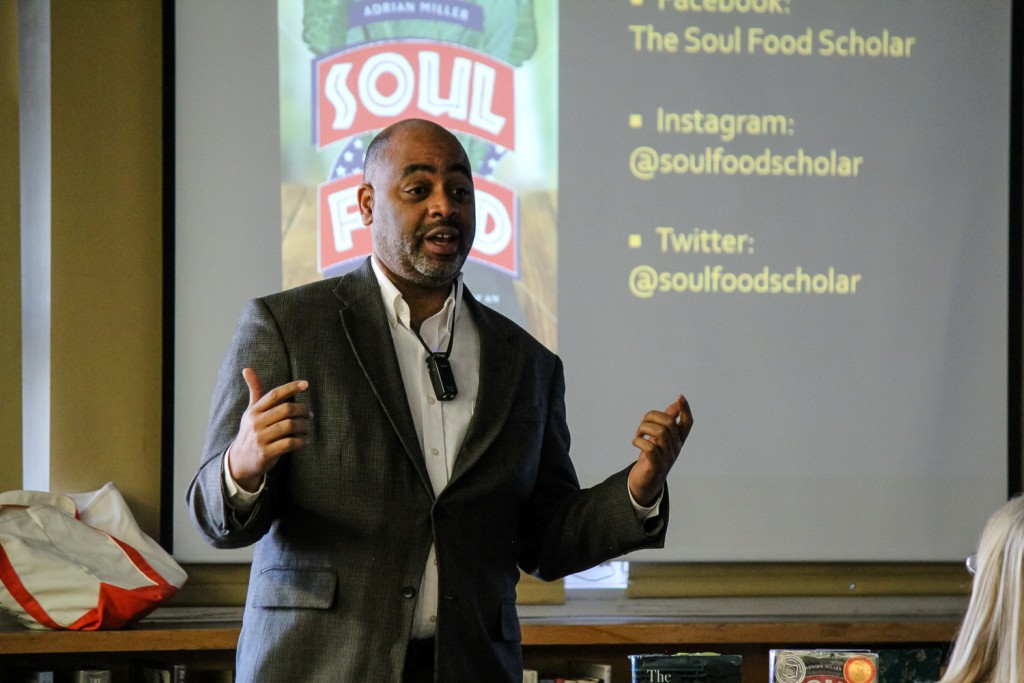 Some of the best stories are told through food, and those preparing the meals can have equally fascinating stories.

Culinary historian Adrian Miller — popularly known as the Soul Food Scholar — visits Charlotte on Feb. 12 for “Tales of a White House Kitchen,” an evening where he’s “dropping knowledge like hot biscuits” about African-Americans who served in the presidential kitchen.

Beginning with Hercules, an enslaved cook who served George Washington, and ending with the Kids’ State Dinner hosted by the Obamas, Miller will share stories and insights spanning centuries of America’s social and cultural history.

The evening also features a book signing and reception with small bites prepared by Chef Greg Collier, co-founder of Soul Food Sessions and The Yolk at 7th Street Public Market.

Miller says attendees should walk away with a “deeper appreciation for the role that African-Americans played in nourishing and nurturing our first families.”

Finding himself wanting to take another path, he secured a position within the Clinton administration as Deputy Director for the President’s Initiative for One America. He said his work within One America was built on the premise that “if we all sat down together and listened, we have more in common than we realize.”

After Clinton’s presidency ended, Miller found himself unemployed. But that sparked the beginning of his journey from the world of law and politics to the culinary realm.

“While unemployed, I decided I had to read something,” he said.

His book of choice was John Egerton’s 1987 release Southern Food: At Home, on the Road, in History, where he connected with the line expressing that “the comprehensive history of Black achievement in American cookery has yet to be written.”

It inspired Miller to address the challenge himself.

“With no qualifications, other than eating it, I dove right in,” he recalled.

Miller is now the author of two books: Soul Food, which earned him the prestigious James Beard Foundation Book Award in 2014, and The President’s Kitchen Cabinet, which was nominated for a 2018 NAACP Image Award.

“I’m big on celebrating the unsung,” he said. “Our contributions as a people have been minimized or completely ignored.”

Connecting the dots as a certified BBQ judge

While Miller has deep connections to soul food and identifies turnip and mustard greens as his favorite bite, he also has significant ties to barbecue, having become a certified barbecue judge through the Kansas City Barbeque Society.

“Noticing that many soul food restaurants have barbecue sides, I wanted to explore the connection between the two. Becoming a barbecue judge has been the greatest conversation starter I’ve ever had,” Miller said.

Lexington Barbecue in Lexington, N.C., is his favorite North Carolina barbecue restaurant. He says the pork shoulder and hush puppies are amazing. On his latest trip through the state, he’s identified several establishments in Raleigh, Durham, and Fayetteville to visit. Miller is open to suggestions for good barbecue during his stay in Charlotte.

His forthcoming third book, Black Smoke, will focus on barbecue culture and the significant contributions that African-Americans have made to it. As part of his research, Miller is currently on a tour of African-American owned barbecue restaurants across the country and inviting interested individuals to join him along the way as “barbecue research assistants.”

As for his upcoming talk, Miller looks forward to highlighting the achievements of those responsible for providing sustenance for our first families.

“They gave presidents a window into Black life that they wouldn’t have had otherwise,” he said.