McFadden, speaking at a community forum, said he ended Mecklenburg jail's cooperation with ICE because the 287(g) program did not enhance public safety. 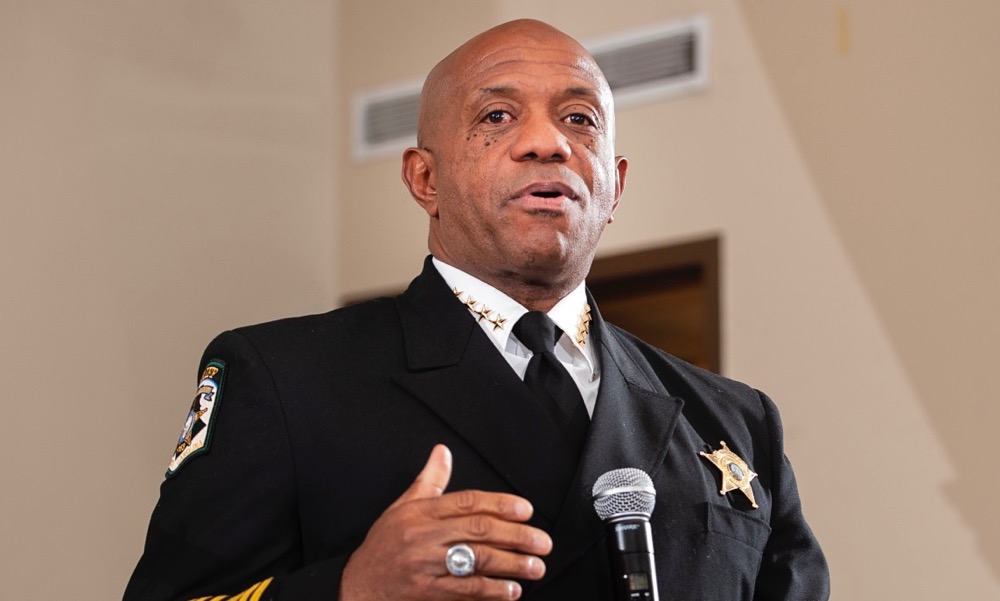 Mecklenburg Sheriff Garry McFadden addresses an audience after he was sworn in, December 4, 2018. Photo: Jonathan Strayhorn.

Mecklenburg Sheriff Garry McFadden said he received “threats” after notifying U.S. Immigration and Customs Enforcement (ICE) that he was ending a controversial program that allowed ICE to operate inside Mecklenburg County jails.

McFadden, who was sworn in Tuesday, spoke of the threats Thursday night at a Bridging the Difference community form at the Camino Community Center in northeast Charlotte, where the topic was immigration. The monthly forums are hosted by Chief Kerr Putney of the Charlotte-Mecklenburg Police Department as a way to get residents talking about difficult topics. (The December topic was set weeks in advance of McFadden’s decision to break with the ICE program.)

McFadden later told Qcitymetro he took the threats seriously but did not elaborate.

“I take all threats seriously given everything that’s been going on,” he said.

Stay informed with news and events that impact Charlotte's Black communities.
Sign me up
Get our Morning Brew newsletter
Join the 6,000-plus who are working to build an inclusive Charlotte.

During a Q&A session with Putney, several members from the immigrant community rose to thank McFadden for ending the jail’s participation in 287(g), which ICE had used over the years to detain thousands of county inmates who were in the country illegally. Ending the jail’s participation in the program had been a pillar of McFadden’s campaign to unseat Irwin Carmichael, a fellow Democrat he defeated in the party’s primary election. McFadden ran unopposed in the general election.

Not everyone who attended the Thursday forum appeared to support McFadden’s decision to withdraw from the 287(g) program. Some questioned whether the decision would expose the county to more crime committed by undocumented immigrants.

McFadden pushed back, saying that of the roughly 3,000 sheriffs’ offices nationwide, fewer than 80 currently partner with ICE through the 287(g) program.

“I believe if it was such a good crime-fighting tool, everybody would participate, instead of the 78 or 75 agencies,” he said.

Attorney Becca O’Neill, who is working as special counsel to McFadden, said a “handful” of detainees were released from Mecklenburg jail after McFadden notified federal authorities that he was ending the jail’s participation in 287(g). One of those released, she said, was a juvenile.

O’Neill declined to say on what charges the detainees were initially arrested, but she said all were eligible for release but for their immigration status.

With the end of 287(g) in Mecklenburg County, she said, “the community that is not U.S. citizens is being treated the same way by the jail that I’m treated… The treatment of those individuals is the same as anyone else, so if local charges are dismissed, the jail won’t hold them unless there is a criminal warrant.”

Some fear ICE crackdown in Charlotte-Mecklenburg

Some in the immigrant community told McFadden they feared his decision might provoke ICE to adopt more aggressive tactics in Charlotte – a concern bolstered by a statement released Thursday by the agency’s Atlanta field office.

Sean Gallagher, who directs that office, said McFadden’s decision was “an open invitation to aliens who commit criminal offenses that Mecklenburg County is now a safe haven for persons seeking to evade federal authorities.”

In fiscal year 2018, he said, ICE identified 1,185 “criminal aliens” through Mecklenburg’s participation in the 287(g) program. The decision to end the county’s participation, he said, “leaves them to reoffend against the people of Mecklenburg County.”

Gallagher said, “ICE remains committed to enforcing federal law, and this decision does not mean immigration enforcement will decrease in Mecklenburg County.

He added, “residents should expect a more visible ICE presence in Charlotte, as ICE will now have no choice but to conduct more at-large arrests in local neighborhoods and at worksites, which will inevitably result in additional collateral arrests instead of arrests at the jail where enforcement is safer for everyone involved.”