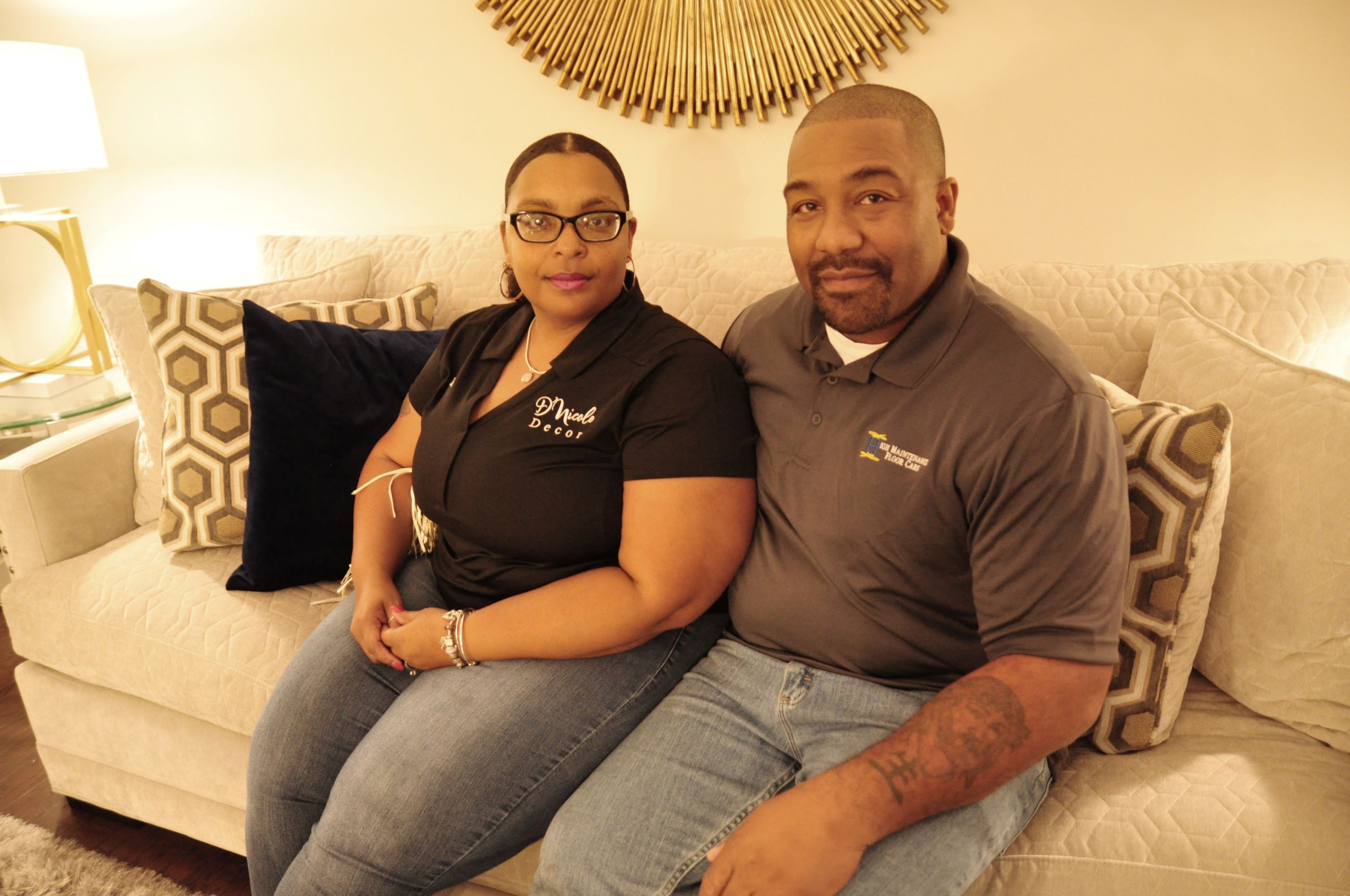 Having continuous streams of revenue is the goal for serial entrepreneurs Denean and Terrance Jackson. The couple owns a flooring company, a clothing brand, an interior design firm and real estate properties. (Photo: QCity Metro)

For Terrance and Denean Jackson, entrepreneurship means building a legacy. The couple’s “just do it” mentality led to starting their first family business 13 years ago, a franchise janitorial service established in Milwaukee. In 2007, the Jacksons sold the franchise and packed up their three kids to trade bitter cold Wisconsin winters for friendlier seasons in Charlotte. Once in the Queen City, it wasn’t long before they started another business. And another. And another. And another.

“We’ve always had multiple streams of income,” Denean said. “When we had three small kids at home, that was the only way we could survive.”

The family traveled nearly 900 miles to Charlotte, knowing no one before they arrived. They strategically bought into a cleaning franchise in order to build a network, and it paid off. Terrance and Denean successfully landed eight corporate accounts and hired four employees. While it was great for making connections and growing the company, the Jacksons knew they didn’t want to stay with the franchise model for long.

“That’s the thing with us, we’re not afraid to try,” Terrance said.

In 2010, they branched off to start High Maintenance Floor Care, a commercial flooring company. Much of the clientele grew from relationships with their previous franchise. Terrance discovered a niche in stripping and recoating floors that, he says, allowed him to make more money in two to three days than he did in a whole month with the cleaning company.

Entrepreneurship has been a family example

Like many budding entrepreneurs, Terrance and Denean held full-time jobs while managing their part-time business. He worked in quality control at a local turbine company, while she stepped into accounting at a local car dealership. When the payments were slow among clients, those full-time jobs were a financial safety net.

“A low point with High Maintenance were the times when we couldn’t make payroll,” Terrance remembered. “We would take paychecks from our jobs to make sure our staff was paid first before we got paid. We were juggling.”

But, they persevered. The entrepreneurial spirit was ingrained in them. Both had grown up with self-employed parents and saw the highs and lows that came with it. Terrance’s dad owned a painting business, while Denean’s father owned a wood-finishing company.

Their fathers’ endeavors — mixed with Denean’s love for decorating — helped launch Denean’s interior design firm, D’Nicole Décor, in 2016. She credits her husband as the unsung hero in the startup’s success. “He’s the man behind D’Nicole. He’s my delivery guy, my wallpaper installer, my painter, he’s everything,” she laughed. “If you have a product, put it out there and see what it can do,” he said about his apparel company that began with hoodies and now includes other items like t-shirts, leggings and baby onesies.

The pair says faith has guided their roller coaster journey as serial entrepreneurs. The goal is for both to become completely self-employed. The Jacksons reached another family milestone this summer when Denean quit her six-figure salary career as a controller at the dealership to fully focus on D’Nicole Décor. The couple reiterated their “just do it” advice.

“The longer you wait, the more you’re going to talk yourself out of it,” Terrance explained about those wanting to start a business. “You can’t wait until the right moment. There will never be one.”

“We’re trying to put the idea in the back of their minds that you can always create your own money,” Denean said. “There’s always more than one hustle.”