Reed is one of nearly 300 tattoo artists showcasing during the Queen City Tattoo & Arts Festival Oct. 26-28. He recalls his journey of starting over and grinding toward success. 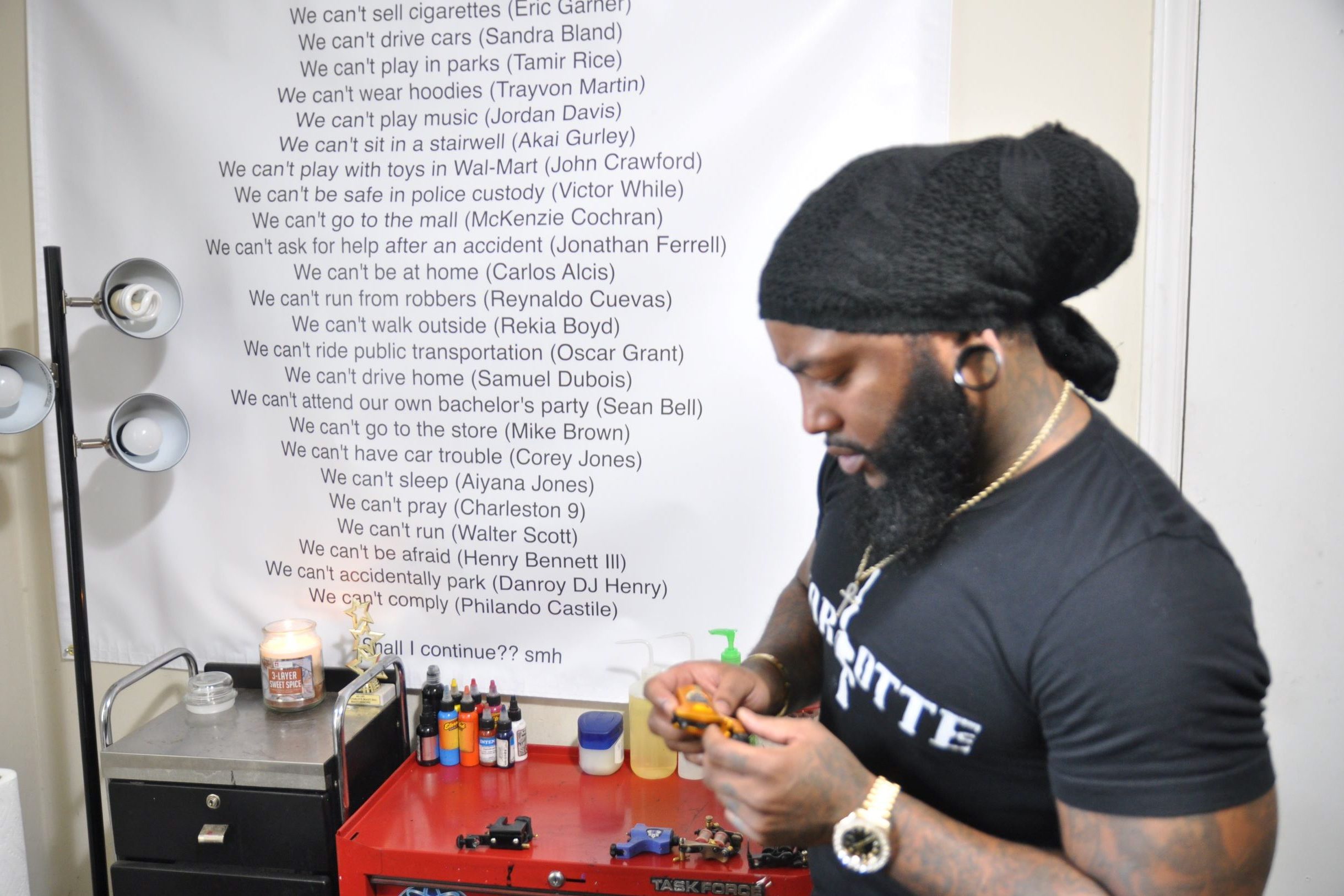 You can’t help but be taken in by Tanaro Reed’s positive energy. The Marine Corps veteran turned tattoo artist doesn’t claim to know everything, but over the course of his nine-year entrepreneurship journey, he’s learned that building camaraderie is key in a community that’s often described as “cliquish.”

Reed is one of nearly 300 tattoo artists showcasing skills at the first Queen City Tattoo & Arts Festival beginning Oct. 26. Tattoo enthusiasts and casual observers will meet and greet world-famous artists at the three-day event along with a chance to get tattoos on site.

“This is the first event like this in Charlotte. I think it’s dope. Everybody put their cliques aside and came together to represent local artists,” said Reed, owner of Slaughterhouse Tattoos. “A lot of the artists involved are big names who you’ll probably never get to meet in Charlotte. It’s a good opportunity to see how other people work and exchange training ideas.”

Reed moved to Charlotte from Washington, D.C. in 2002. After a five-year prison sentence, he found himself starting at square zero and describes it as an opportunity to start over. He got a job as an assembly line worker at a warehouse from 7 a.m. to 7 p.m. In his downtime, he pulled out his sketchbook and added to his collection of drawings. It was at that point that he realized in order to build on his talent meant leaving the 12-hour warehouse shifts behind.

A friend owned a tattoo shop in Columbia, S.C., where he would help out at the front desk. He hadn’t thought about becoming a tattoo artist because, at the time, he saw that black artists were underrepresented in the industry. But, he sat back and watched.

“It’s amazing what you learn by watching. I watched my friend do what he does. One day, he asked me to do a tattoo of the Puerto Rican coqui frog and it came out dope.” he recalled. “It was great that he put that trust in me.”

After that, he dove into becoming skilled, and certified, in his craft.

Although Reed is in the tattoo industry, he faces many of the same challenges as entrepreneurs in traditional sectors. He’s following his passion — that went from graffiti art to tattoos — but has weathered struggles trying to make that passion profitable.

In 2010, he opened his first tattoo shop in South End. One of his biggest decisions was to close the brick-and-mortar location less than two years later. He admits it was a tough time.

“One thing that I realized about running a shop is that you have to have like-minded individuals, or you’re going to get trapped into overworking yourself to pay overhead,” he explained. “I was doing 16- to 17-hour days just to pay the overhead. So I said, ‘We had a wonderful grand opening; we’re going to have a wonderful grand closing.’”

Fortunately, Reed had a good relationship with a staff member from the Dept. of Health and Environmental Control who gave him the idea to set up a home-based business.

“He came by and let me know what I needed to do to bring everything up to code. It was cheaper than paying overhead for a shop, so why not?” Reed said.

Reed said that his goal is to have a brick-and-mortar shop again, but as an owner, not a renter. As payback to those who invested in him, he wants to open the door for other young tattoo artists.

“Until then, I’m going to keep grinding.”

Interesting fact: Reed is father of 13-year-old Ramon Reed aka Young Simba of the national touring production of “The Lion King” and cast member on upcoming Disney Channel series “Just Roll With It.”

I asked him how it felt to watch his son pursue his own dream.

“What’s beautiful about it is that no one pushed him into it. To see him growing into a passion and a craft, there’s no words for it.”

Watching these two @iamramon.reed @chocolatesuperstar perform last night in the Broadway musical @thelionking was definitely a night to remember. It goes to show that with family, friends, and support from US as a whole. The sky is the limit for our young kings and queens. #GoFollow #AFollowIsFree.