The former Apple engineer returned to Charlotte determined to diversify the tech industry. 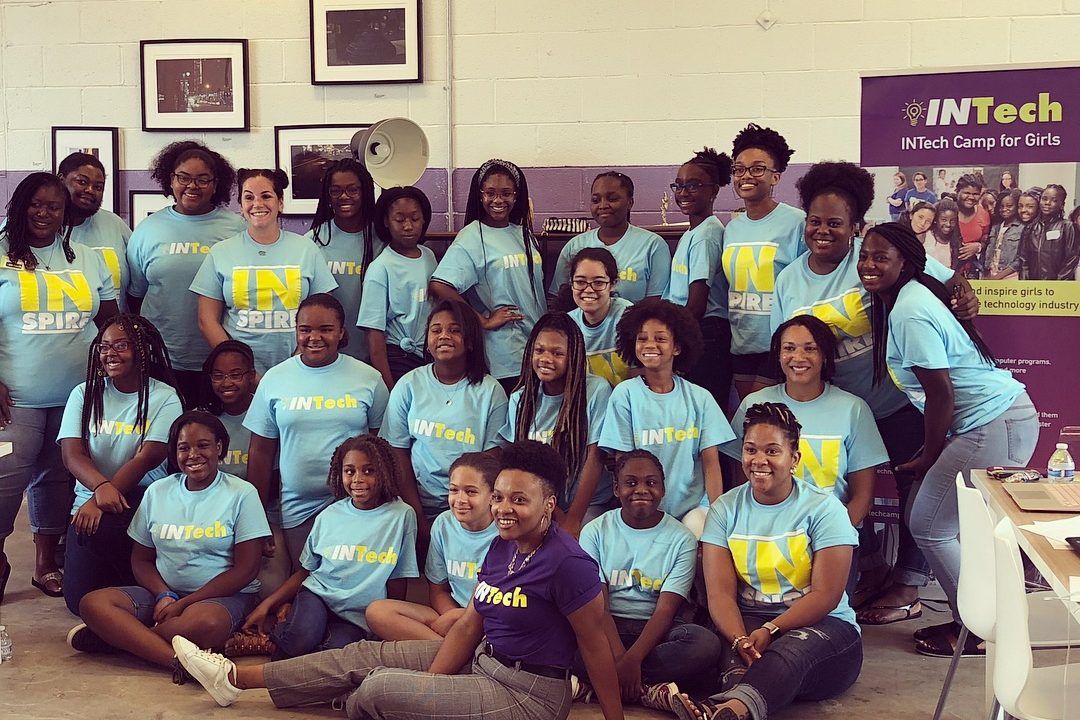 When Khalia Braswell was in the fourth grade, her mom gave her a choice between receiving a pair of Air Jordans or a computer. She chose the computer. Her decision ignited a passion for technology and set her on a path that will include a stop at TEDxCharlotte on Oct. 12.

Braswell, 27, is the founder/executive director of INTech Foundation, a local nonprofit with a mission to inspire black and Latino girls to get into tech. Although a native of Rocky Mount, N.C., Braswell spent the majority of her childhood on Charlotte’s west side. It was at Phillip O. Berry Academy of Technology where she fell in love with computer engineering. Ultimately, she worked her way to Silicon Valley as a user experience engineer for Apple while running INTech remotely.

Her Charlotte pride runs deep — she has a tattoo of the Queen’s crown on her arm to prove it. More importantly, Braswell wants her pride for the west side to be just as visible. That meant a full-time commitment to INTech and eliminating the digital deserts in her community. In January, she left her role at Apple to return to Charlotte. Her journey inspired next week’s TED Talk, “From the West Side to the West Coast: How a computer can keep a girl out of poverty.”

Braswell’s impact doesn’t go unnoticed. She was invited to attend the inaugural White House Computer Science Tech Jam in 2015. She was named one of Charlotte Mecklenburg Black Chamber of Commerce’s 30 Under 30 in 2016. Last month, she was recognized as one of The Root 100, an annual list of the nation’s most influential African-Americans ages 25 to 45.

I spoke with Braswell about her TED Talk, Charlotte’s tech landscape, her alter ego and more.

What was your first reaction when you found out you were selected for TEDxCharlotte?
I was ecstatic! Being a TED speaker has been a longtime goal, so I am honored to be able to grace the stage in the city that raised me.

What do you want people to take away from your TED Talk?
I want people to know that while there is a lack of black/Latinx women in tech, we have the solutions to solve this problem. We need to focus on the overlooked communities and expose our black/Latinx girls to women in tech, coach them on how to build tech products, and make sure that they have a computer with internet in their homes.

Why is it important that we empower girls in the tech industry?
The tech industry needs more women of color. Not only is it that simple, but it’s also a great business case. According to the Harvard Business Review, the more diverse the team, the more financial gain is made. Being in tech has changed my life – I’ve found my passions and discovered work that I can do from anywhere in the world. It’s also allowed me to be financially free, which is not the case for a lot of those around me.

What was your reaction learning that you made The Root 100?
I was in Durham at the Google For Entrepreneurs Black Founders Summit listening to my friend Bria do her talk. I hopped on Twitter to tweet about her session and noticed that Jewel Burks Solomon tagged me in a tweet about people she knows being listed. I was thinking ‘surely she didn’t mean to tag me.’ I clicked on the link, went to the STEM category, and boom, there I was at #90. Tears legit sprung to my eyes. Super grateful for that!

I read that you were a DJ in college. Is DJ C.E.O! still a thing? If so, where can we check her out?
DJ C.E.O! (Creatively Entertaining Others) is still a soft subject for me. I used to have a radio show called Soulful Renaissance on WKNC 88.1 and I did gigs on campus [at North Carolina State University]. DJ C.E.O! pretty much has been on retirement since 2013. Hopefully next year she will reappear. Hold me to it?

Coming from Silicon Valley, what’s your take on Charlotte’s tech scene?
I think Charlotte has some work to do to foster more of a community with those who are in tech, in a way that Silicon Valley, Durham, New York, and Austin has. We’re getting there; however, things still seem to happen in silos. I want Charlotte to be THE place to go for technologists. I love our city, and I want all of my friends in tech to want to come here.

What is your favorite black-owned restaurant in Charlotte? Why?
Popbar. Although it’s not quite a restaurant, the owners Kia and Clarence Lyons, are longtime supporters of INTech. Clarence and I originally met through National Society of Engineers. It’s just super awesome to see them not only have a great product but be in a great location that will attract a lot of business. I can’t wait to see where this takes them.

Tickets for TEDxCharlotte are sold out, but viewers can stream the 13 speaker presentations at tedxcharlotte.com.