London and Paris, the second time around, still delight

Planning to take advantage of falling prices to Europe? Here are some memorable moments and tips if you visit these vibrant, bustling historic cities. 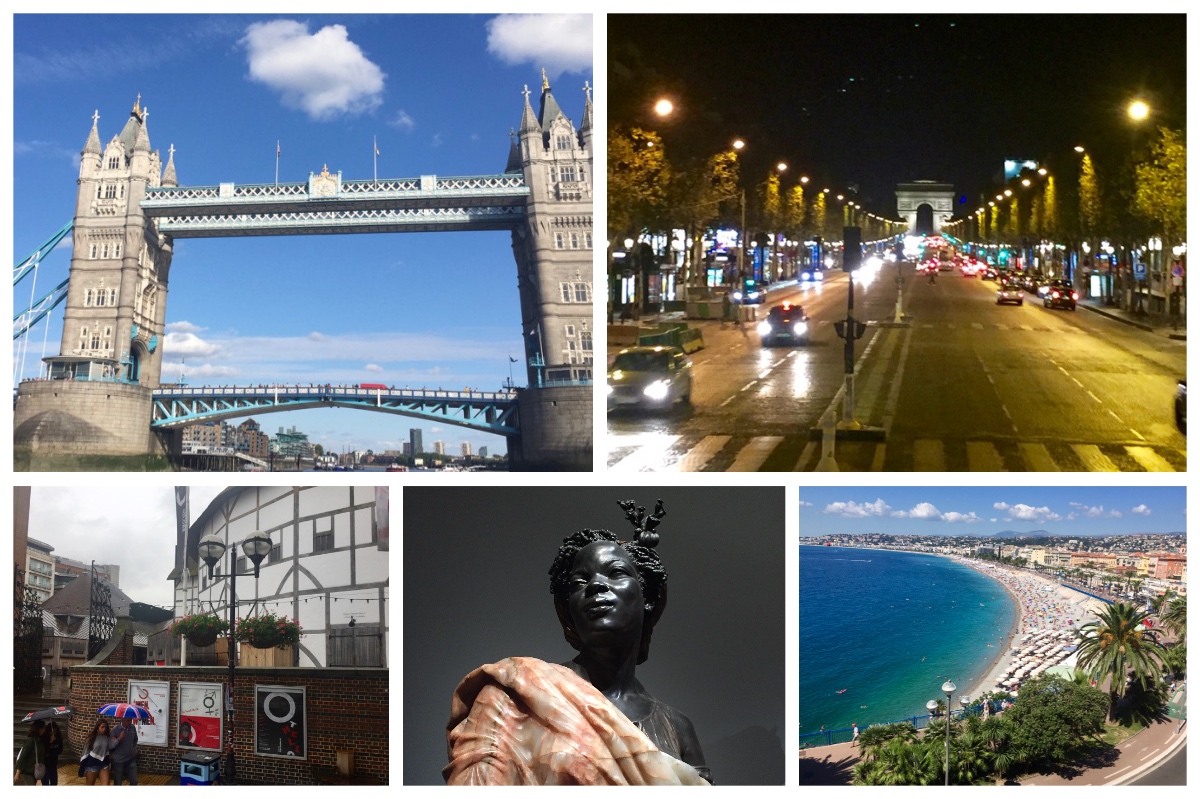 In the heat of August, my BFF and I set out to celebrate our birthdays for two glorious weeks in Europe: a three-night stay in London, an overnight stay in Nice, an eight-day cruise along the Rhône River in France, and the pièce-de-résistance — three nights in Paris.

Twenty-something years earlier, a brief trip to London and Paris had whetted our appetites to do and see more of these vibrant historic cities. The timing was ripe for return visits despite the heat wave across Europe.

With summer coming to an end, temperatures and prices for European travel are falling, and good deals can be found for fall vacations, according to USA Today. Here are some of my favorite moments during the trip and some tips if you plan to visit these vibrant, busy cities.

The British Library: Yep, this former English literature major headed to the library, and it was awesome. The library has 150 million items in its collection but our target was the Sir John Ritblat Gallery, which houses the “Treasures of the British Library” collection, some permanent and some temporary exhibits. If you’re a Monty Python fan, you have until Nov. 25 to enjoy “Michael Palin: Writer, Actor, Comedian,” a collection of notes, scripts, letters, photographs, etc. from Palin’s archives. We giggled, stifling guffaws, as we moved from one piece to the other, such as the handwritten sketch for the “spam” bit, and ideas for the Ripping Yarns series.

Tomes of religious works, the Magna Carta, a folio of Shakespeare plays, sketches from Leonardo Da Vinci’s works, and notebooks from the Bronte sisters will fascinate you with their tiny, precise handwriting. Beatles fans — even those who aren’t — will get a kick out of seeing John Lennon’s son’s first birthday card — Lennon wrote the lyrics for a Hard Days Night on the back.

Maroush Beauchamp Place: With a menu of Lebanese mezes and grills so huge and varied, we began — and ended — with an array of appetizers:  fried halloumi cheese, deep-fried lamb meatballs, falafel, hummus, tabouleh, olives, and the best chicken wings that side of the Atlantic. With the massive bowl of  “salad” — more like a small vegetable garden — and plates of fruit and sweets that the restaurant serves as the beginning and end of the meal, we never made it to the entrées.

The Stafford London in the St. James District: This historic hotel, just a shortcut away from Green Park and a short walk to Buckingham Palace, impressed us with its understated elegance and five-star service. Each morning, we readied for the day with a hearty English breakfast in The Game Room restaurant. The hotel also has one of the longest-surviving American bars in London.  If a large bathroom is a travel essential, book a suite in The Mews, located in the quiet courtyard behind the main building.

We couldn’t resist a return trip to Musée d’Orsay for a peek at the Van Goghs, Monets, Manets, Degas sculptures and more, but the Grand Dame is still my favorite sight to behold. We took a night tour of Paris on an open-top bus. No surprise, the highlight was the Eiffel Tower, all lit up and glowing fire-orange in the night sky. And then thousands of lights placed around the Tower began to twinkle and dance (video). Ooh, la la! The Tower lights up every night for five minutes every hour on the hour.

Surprisingly unmemorable (except for breads and cheeses) — and pricey. We easily spent $70 bucks for lunch — standard fare such as burgers and fries, or an omelet and salad, with a beer or glass of wine. On our last night, we dined with friends at the historic Le Procope, where the Rum baba made a lasting favorable impression on my taste buds. At Les Deux Magots, frequented in the olden days by Jean-Paul Sartre and other literary giants, I had the biggest beer of my life.

Of course, you can’t go wrong just noshing on a plate of bread, cheese and charcuterie — nothing but happy calories in that diet.

Hotel Esprit Saint Germain in the 6th arrondissement: With two guest areas for sitting and relaxing with drinks and eats that are included in the cost, the five-star Hotel Esprit invites you to sit down and take a load off. If you want an hour to yourself, book the steam and sauna room at the top of the hotel where you can get in a workout on the treadmill, take a steam bath and/or sauna — in your own private oasis. What an awesome experience — and one that is already included in the cost.

• With so much to see and do in these walkable cities, the London tube or Paris metro can be a shoe-leather saver, but you can wind up walking a Las Vegas block or two to get to the train platform. I found the cost of the taxis to be reasonable (but maybe that was my weary feet barking at me).
• In restaurants and cafés, a service fee of 12 percent or more is generally added to the bill, but feel free to leave some coins on the table as the service fee may not make it to the server’s pocket. London tipping guide | Paris tipping guide
• Paris and London are two of the most-visited cities in the world, so if you have your heart set on seeing a particular attraction, buy your tickets in advance. Otherwise, prepare to wait for hours in lines that rival a visit to the Vatican. Our wait to tour The Catacombs would have been about 3.5 hours. As high tourist season winds down, lines will shorten, but don’t take the chance of missing out on your desired attraction.

Are you ready for a European vacation, but want to stay away from the big cities? A river cruise might be right for you. Read about our 8-day cruise on the Rhône River in France.

Mordecia Strickland is a digital editor and writer, who’s working hard on enjoying life and spending time with family and friends. Find her on Facebook and Twitter.