For Domonique and Les Boone, the road to entrepreneurship began a year ago when her mother's washing machine gave out. 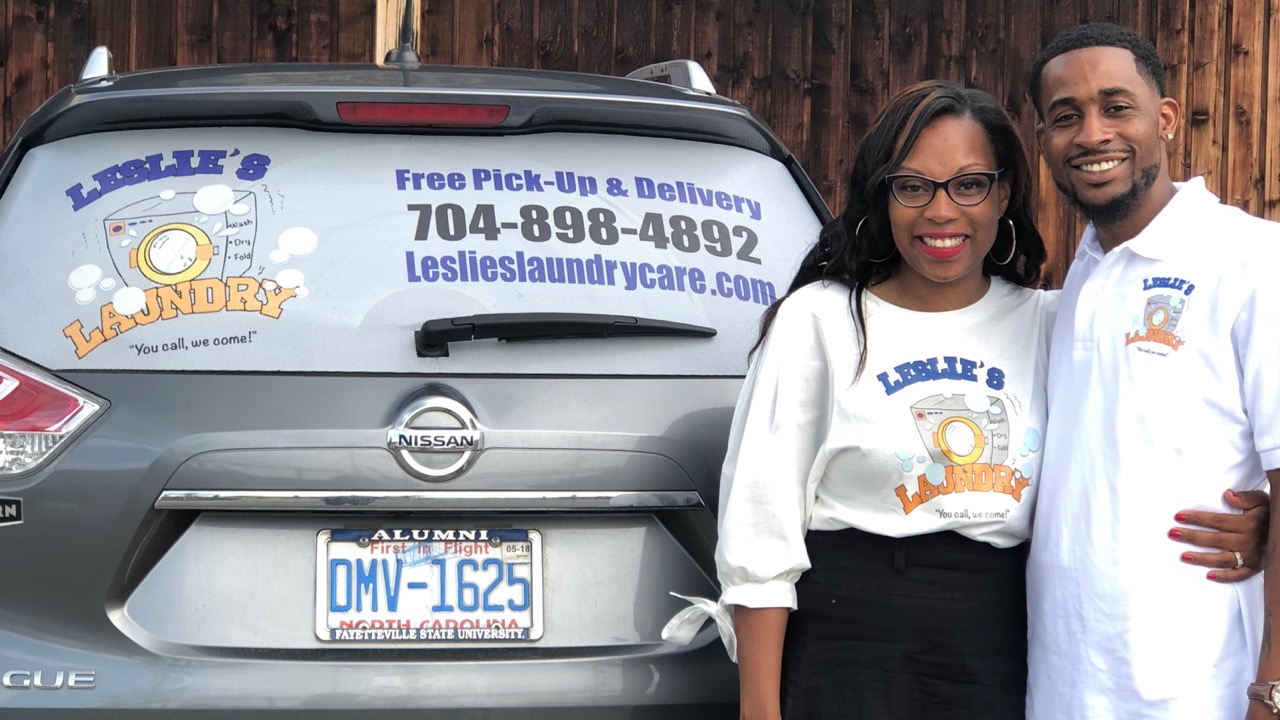 Some businesses are launched after years of careful planning; others are born almost by accident.

Take the case of Leslie’s Laundry Care, a Charlotte startup founded by Domonique Boone and her husband Les.

And that’s when the idea hit her.

Prices range from $40 for small bags of laundry (2-3 loads) to $80 for large bags (4-5 loads), with free pick up and drop off. (Leslie’s Laundry Care was recently featured on the “Charlotte Today” morning show.)

A day for Boone starts around 8 a.m. and ends 12 hours later. “I normally wake up to about three to four new clients each day,” she said.

Most of the washing is done at Boone’s house, but larger orders may be outsourced. The Boone’s home is equipped with two large washing machines and dryers. Folding is done by hand. Her husband works full time, but they take turns doing pick-ups and drop-offs.

After their daughter was born, the couple attempted several businesses before deciding on the laundry service.

“Sometimes our culture and our people do not focus on the future, but instead look at the right now,” Boone’s husband said. “Though we have short-term goals, we have long-term goals that will leave a legacy for our daughter and the kids that we may have later on.”

Boone said she is the first in her immediate family to graduate from college, and she said she values the precedence she is setting.

Despite being in the millennial age range – both in their late 20s – Boone said social media proved to be her biggest challenge along the road to entrepreneurism.

Before launching Leslie’s Laundry Care, she had not been active on social media for eight years. “It was a challenge stepping in, because I did not know if it was Facebook or Instagram that people used the most, or LinkedIn,” she said. “And I did not understand Twitter and the hashtag situation.”

Since earlier this year, however, she has managed to create a business presence on all social media platforms and is turning tweets into “more clientele and corporate contracts.”

Some of her bigger clients include car detailing companies, barbershops and event planners. And most recently, she said, she signed a deal with a golf course.

The couple also owns a music publishing business — MoreOrLes Entertainment – which they started in college. Les Boone calls it a niche business, unlike the laundry service.

“Everyone,” he said, “ranging from the stay-at-home mom to the corporate guy who doesn’t have time to get his suit dry cleaned could use some extra help with the laundry.”

The Boones said they have expansion plans that may someday include selling franchise operations. They also want to build a smartphone application that would make ordering their laundry services more seamless.