Inside ‘The Nest,’ a North End space with high-speed Wi-Fi

Hosted by hygge coworking, the 1,000-square-feet space is being described as a “digital learning lab” with free, high-speed Wi-Fi, courtesy of Google Fiber. 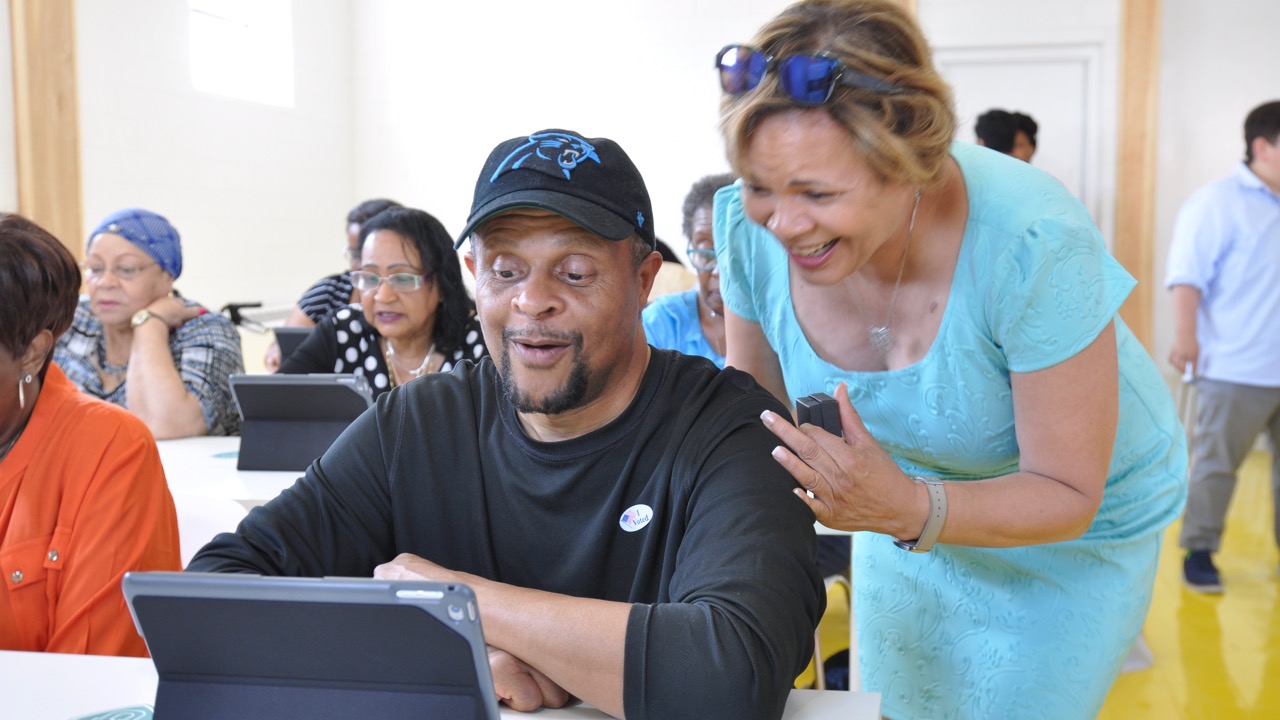 Mayor Vi Lyles chats with North End residents at The Nest who were using computers to learn more about how local government works, May 8, 2017. (Photo: Qcitymetro)

Charlotte has a new public space with access to high-speed Wi-Fi, and it’s not found in a location you might expect.

The Nest opened Tuesday in Camp North End, a former industrial complex that is quickly becoming the heart of Charlotte’s North End Smart District. Mayor Vi Lyles was on hand to cut the ribbon.

Hosted by hygge coworking, the 1,000-square-feet space is being described as a “digital learning lab,” a place where organizations can meet to access free Wi-Fi, courtesy of Google Fiber. (Google Fiber announced last week that it had wired the 7th Street Public Market high-speed Wi-Fi — the first public space in Charlotte to have free access to Google’s fastest internet service.) Justin Harlow, who represents the area on City Council, called The Nest a significant development for his district, which includes some of the city’s oldest, historically black communities.

“We talk so much about the digital divide,” he said. “Creating a sense of place for folks is very, very important. We’re trying to get better at place making, bringing people together — old, young, black, white, mixed income — and bring them together around technology.”

He said he believes The Nest will become a model for other Charlotte communities.

Organizations, in partnership with private-sector firms, already are lining up to use the space.

• Red Ventures will use The Nest to offer workforce training to young adults (ages 18-25) though its 12-week Road to Hire program.

• And TechCLT Youth Programming, which provides 16- to 24-year-olds with education and career guidance, has announced plans to use The Nest.

Like many of the African American neighborhoods near uptown Charlotte, the area surrounding Camp North End is quickly being gentrified after decades of neglect – a fact not lost on some who attended the ribbon-cutting ceremony.

Lyles said she and others in city government are committed to looking at neighborhoods and bringing back what was “original and truthful” about them.

“We’re acknowledging our history,” she said. “Sometimes it’s good, and sometimes it’s not so good. But we’re willing right now as a city council to talk about it openly, and that’s what I see all of us doing today — talking about what can be the future.”

Melissa Gaston, who cofounded the Northend Community Coalition, said The Nest was an example of how things should get done in Charlotte.

“So often people come to our community and our area and tell us what we need,” she said. “This was a little bit different; they asked us what we wanted.”

She said a digital learning lab was important to the neighborhood because many of its residents don’t have access to high-speed internet service.

“To do most things nowadays, you need to have some type of internet access,” she said. “It means a place where we can gather, where we can build community and feel like it’s our home.”

Garrett Tichy, founder of hygge coworking, said he believes The Nest, and how it is used, will evolve over time.