At Saturday's commencement ceremonies, graduating seniors were encouraged to share their "vibranium." 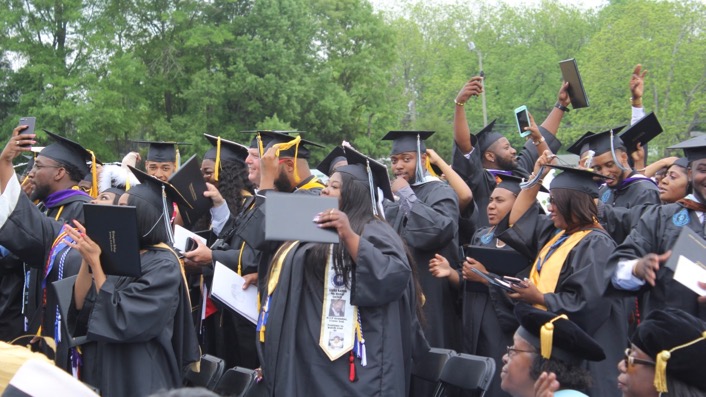 In the movie, the fictional metal of vibranium was exclusive to the people of Wakanda, offering superhuman abilities.

“The vibranium that was so important (there) is what you have picked up here at Livingstone,” Blue said. “It is within you; it’s in your DNA now. You can be like the people of Wakanda were initially, hiding it from the world, not willing to spread it out so you can help the world.”

Blue, who spoke to this same class four years ago when they were freshmen during Fall Convocation, noted that the class was much bigger then, and congratulated those seated before him for persevering and surviving the challenges.

“You’re in a changing world. You’ve been trained not to be afraid of change,” he said.

Continue to nurture your curiosity and desire to learn, create and grow, he said. “You are ready for the world. And the world is counting on you to be ready for it.”

Bishop George E. Battle Jr., chairman of the Livingstone College Board of Trustees and senior bishop of the AME Zion Church, briefly addressed the class urging graduates not to forget God.

Philip Leon Harrison, valedictorian, shared in his humorous speech how he was recruited by Coach Andre Springs, Livingstone’s athletic director, to play golf. He had not heard of Livingstone before then. Since that time, the team has won two CIAA championships, the most recent this year sweeping the southern and northern divisions.

Harrison took six years off from school before coming to Livingstone. Looking back, he said he wouldn’t change his decision to be a Blue Bear.

“If you can make it at Livingstone, you can make it anywhere,” he said to the audience’s laughter. The last of three children to graduate, he recognized his parents whom he said have been waiting on this day for a long time.

Terrell Richardson, SGA president, used common shapes such as the triangle, square and circle to relay his message and to thank family and friends, the faculty and the board of trustees.

Nearly 170 students graduated from Livingstone College on May 5 at its Alumni Memorial Football Stadium.

President Dr. Jimmy R. Jenkins, Sr., charged the students to be the solution they seek. “Have you stopped to think why God chose you to be here at this time? He chooses ordinary people to do extraordinary things. It’s not the dog in the fight, it’s the fight in the dog.”

Bob Marshall, a member of the Board of Trustees, received the Presidential Meritorious Service Award.