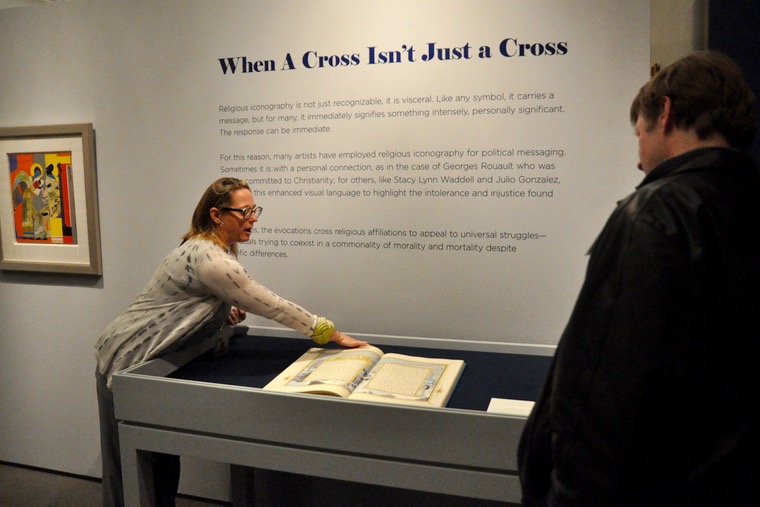 The exhibition title comes from the Old Testament story of Jacob’s encounter with an angel (or God, according to other biblical texts) as he journeys home to face the brother he wronged 20 years earlier. Verses from Genesis 32:24-28 are written on a wall near the exhibition entrance.

The majority of the pieces in the show are from the Bechtler collection. Contemporary artists from the Carolinas are well-represented, including Romare Bearden, Gina Gilmour, Stacy Lynn Waddell, Julio Gonzalez,  Linda Foard Roberts, Herb Jackson, Cristina Cordova and Tom Thoune.

“The objects in this show are filled with bravery, intelligence, and beauty,” Bechtler curator Jennifer Sudul Edwards said in a statement. “Religion still inspires battles around the world, but I hope here in Charlotte, these artworks inspire dialogue.”

Here’s a pictorial peek into the exhibition, which showcases 219 works:

The exhibition includes three of Bearden’s works that reflect upon the African-American experience. In The Annunciation, Bearden dresses the angel Gabriel and Mary in the vibrant colors of African fabrics and assembles the collage in the quilt-patterns of his ancestors.

The vision serpent is a religious icon seen in Mayan-inspired works by Gonzalez, a local artist in residence at the McColl Center for Innovation + Design. Gonzalez said the Mayans envisioned the serpent to be a God in the sky, who revealed knowledge and wisdom to them.

With today’s national debate on gun control, it would be easy to assume Gilmour’s sculpture was a recent work. But the piece was created nearly 40 years ago. The work was first exhibited in Charlotte in 2000, during an exhibition, TROUBLE SHOOTING gun violence, that was organized as a counterpoint to the NRA’s annual meeting being held in the city.

Created in 2005, Roberts says this portrait of her father — a very spiritual man — is a personal image, but it’s also universal because “all religions are spiritual quests.”

Jim Nicholson, Day of the Dead

The Oaxacan Suite was created by former Charlotte resident Jim Nicholson after witnessing Day of the Dead celebrations in Mexico. In No War is Holy, Edwards says Nicholson “saw the world in this oneness of all religions, of all cultures coming together in one unified body of co-existence.”