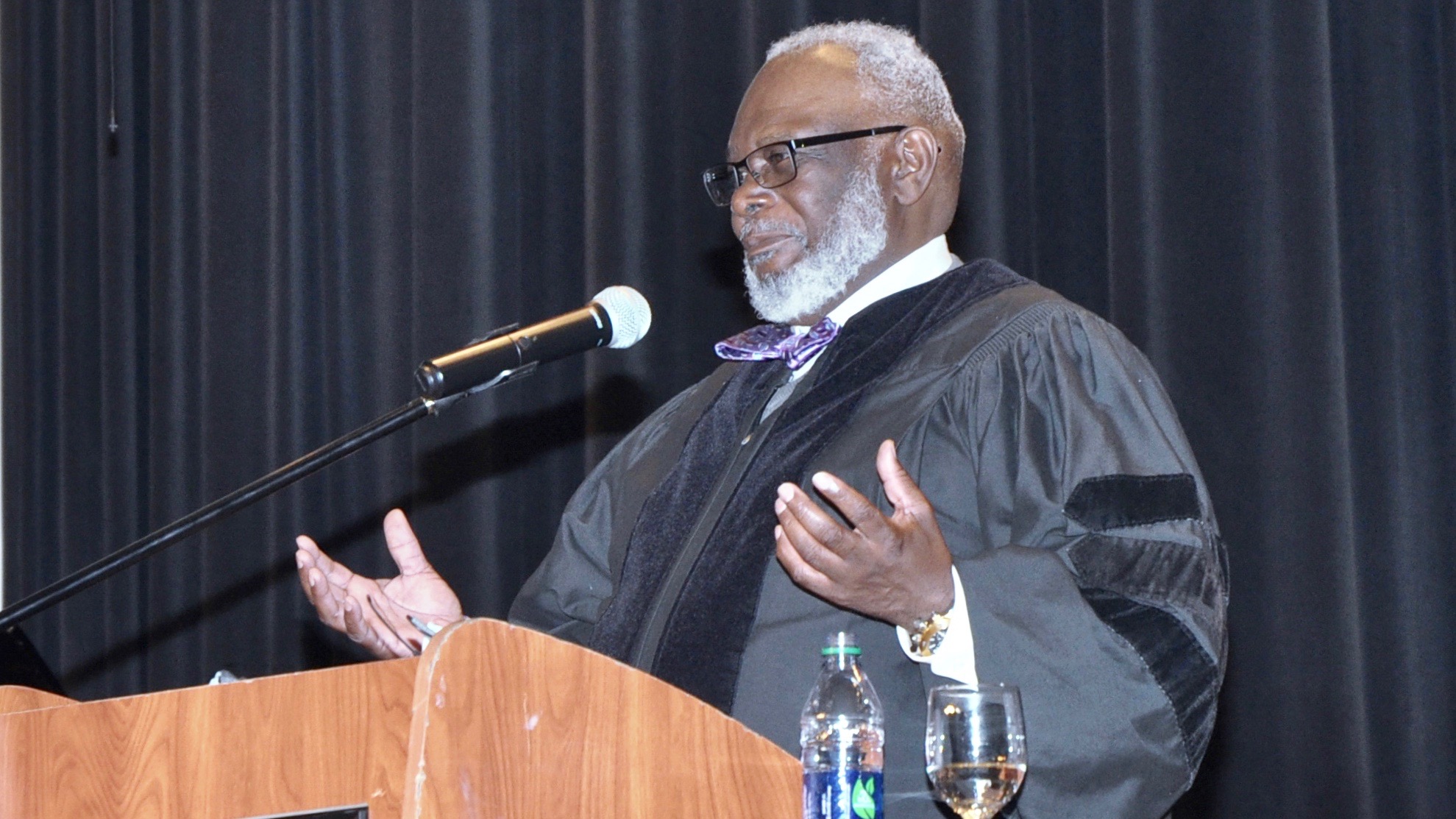 Judge J. Carlton “J.C.” Cole, a Superior Court judge in N.C.’s First Judicial District, spoke through tears as he shared his triumphant story from being an at-risk child to becoming a judge, giving credit to his higher educational beginnings at Livingstone College.

“I understand the importance of this great institution in my life and my development. God first, but Livingstone second,” he said.

Cole described the day he first came to Livingstone College. It was a hot day in August 1967. He rode a Trailways bus eight hours from his hometown of Elizabeth City, which is also where Livingstone’s founder, Dr. Joseph Charles Price, was born as well as current president Dr. Jimmy R. Jenkins, Sr.

He grew up the oldest of six children on a farm, where they used outhouses and had to pump water for cooking and bathing. “But we had love and that can make a difference,” he said.

Cole majored in math and after graduation, he attended flight school to become a pilot. But due to having the sickle cell trait, he had to leave the program. He then moved to New York and eventually became a federal agent for 10 years.

After that, he moved back to North Carolina and entered law school at the age of 34. He practiced seven years before becoming a judge.

He shared the biblical parable of the Good Samaritan in which a wounded traveler was helped by a Samaritan on the road to Jericho after being passed by two other people. “I was wounded when I got here to Livingstone. I was lying on the road and a Samaritan came along and picked me up and dropped me at the doors of Livingstone, and here I stand,” he said.

“And I say to you, how can we – those of us who have been nurtured by this great institution – pass by on the other side of the road,” he continued.

Price became the founding president of Livingstone College after raising $10,000 for the college while at an ecumenical conference in London. The college has celebrated Founder’s Day each year since his death in 1893 and among invitees are descendants of his family. This year, his great-granddaughter, Susan Price Sherrill of Atlanta, attended.

“I am forever grateful to my great-grandfather’s vision for excellence that he established here in Salisbury. It is remarkable to me that the son of a slave in the south during the 1800’s could have envisioned what we are witnessing here today,” she said.

Price’s mother, who was born free, moved them to New Bern so that he could get a formal education because there were no schools for blacks in Elizabeth City.

“Imagine the courage and sacrifices she made just for her son to get enrolled in school,” she said. “Your parents have made similar sacrifices. There is no better gift to give your parents than to educate yourself and become a productive member of our society and excelling in all you choose to do.”

Sherrill’s charge to students was to put forth their best efforts in the spirit of Price by applying themselves, honoring their parents’ sacrifices and taking full advantage of all Livingstone has to offer.

The family of a former president of Livingstone College made a special presentation at the program.

Dr. Sheldon Shipman, son of the late Dr. F. George Shipman, the sixth president of Livingstone College, announced that the Shipman family was establishing a $1 million Endowed Scholarship Fund in memory of their father.

In reading the agreement at the program, Sheldon Shipman said the purpose of the scholarship is to award financial assistance to students with demonstrated financial need, and who have shown academic excellence on the campus of Livingstone College, having a minimum 3.0 GPA.

In a press statement, school officials describe Battle, who chairs the Livingstone board, as its “largest and most generous donor in support of the advancement and financial stability of the institution.” Battle and his wife, Iris, last year donated $100,000 to the college’s capital campaign, the school said.

Livingston also announced that Department of Business will be renamed the George E. Battle Jr. School of Business, Entrepreneurship, Innovation and Technology.

Battle said he was grateful for the renaming.

“God has blessed me in unbelievable ways with a dedicated and loving wife and family, and with an extended family – the A.M.E. Zion Church, a church that thought it not robbery to elevate me to the Episcopacy of our denomination. This gift that my wife and I give is but a token of appreciation for the bountiful blessings we have received,” he said.