Where were all the black women at the Charlotte Women’s March?

I'm not saying black women were absent from the march, but I had expected (and hoped) to see them out in greater numbers. 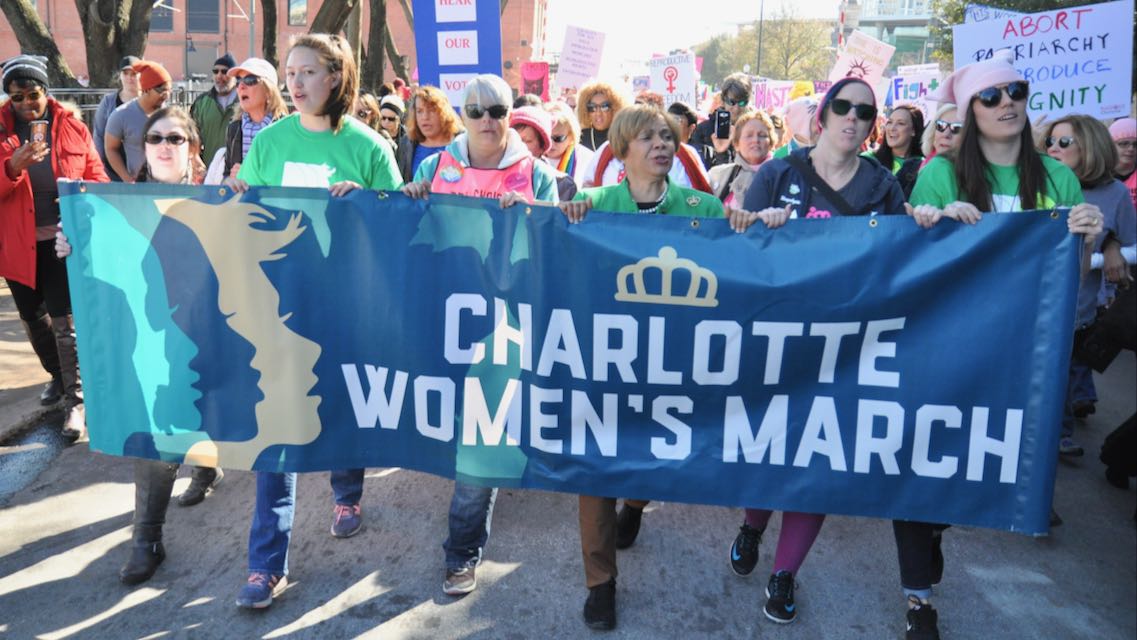 Charlotte Mayor Vy Lyles, fourth from left, leads away from First Ward Park at the start of the 2018 Charlotte Women's March. (Qcitymetro)

In a city where African Americans make up at least 35 percent of the population, the second annual Charlotte Women’s March was decidedly white.

That’s not to say women of color were absent from the march; they simply weren’t there in numbers anywhere near their population percentages.

In an effort to attract diverse participation, march organizers had formed a racial justice committee to spearhead outreach, and the speakers list included representatives from groups such as the Poor People’s Campaign, Muslim Women of the Carolinas, the Black Women’s Caucus, and the Latin American Coalition.

Still, of the estimated 5,000 people who marched from First Ward Park to Charlotte’s Romare Bearden Park, blacks were notably underrepresented.

All of which raises the age-old question: Are black and white women fighting the same fight?

On Sunday in Las Vegas, Cecile Richards, president of Planned Parenthood, suggested that they may not be.

While praising “women of color” for some of the nation’s progressive victories, she called on white women to step up their game. (It must be noted that presidential candidate Donald Trump won a majority of the white female vote but hardly registered among black women.)

Since I couldn’t ask those who didn’t show up why they stayed home, I decided to talk with some of the black women who did march in Charlotte about their reasons for being there.

Here is a sampling:

Remii Rae said she was there to show support for “women’s empowerment.”

“I am part of NOW, which is the National Organization of Women,” she said, “and we’re out to promote feminism.”

Rea said she did not participate in last year’s March, but decided she would march this year after joining NOW during Pride Week 2017.

Vivian Campbell said she has an eye on the midterm elections.

“I think the last election was so divisive, we ended up with people that just aren’t going to help the country come together,” she said. “A lot of people are hurting, and I think we just have to be ready to vote and ready to put someone in office who’s really going to help pull the country together.”

She added: “There are people of all colors that are suffering. So at the end of the day, we’ve all got to be a coalition, and we’ve all got to stand together and think of what binds us and not what’s different amongst us, and we’ve got to vote, because the country needs help.”

Campbell said she was hoping to see more black women at the march. In fact, she said, she had hoped to send a picture to her daughter in college showing a rainbow assembly.

“Really we are on the same side,” she said. “We may have some things that are particular to our group, but we’re only going to get anything if we all pull together… I would say (black participation) is a disappointment, but I don’t think it has to remain an obstacle.”

Donley said she didn’t participate in a women’s march last year, when she lived in Mobile, Alabama. But after moving to Charlotte, she said, her friend, Bell, invited her to come.

“I watched it last year and thought it was very powerful,” Donley said. “Now that I’m in a place to take part in it, I wanted to make sure I was here.”

Donley said she was impressed with the diversity of causes on display at the Charlotte march.

Bell, who did take part in last year’s Charlotte march, said she came to demand equality for women.

“I think Donald Trump threatens that, the progress we have made for women, whether that be equal pay or reproductive rights,” she said. “And even for minority women, those issues impact them in different ways, so I think the march is about a lot of different things, Donald Trump included.”

Bell said she found this year’s march to be more “representative” than the one last year.

“I think this year they have been intentionally inclusive — not only Black Lives Matter but also for LGBTQ and Muslims and immigrants. I definitely have seen black women out here and in force.”

“I think the only person that should have a say over a woman’s body is that woman,” she said. “The fact that it’s still a conversation is very frightening to me. Where does it end? If we are limiting the decision a woman can make about her body, what’s next?

And like other black women I spoke with, Bell said she is hoping for a political change come November.

“I think with all of the marches across the U.S. last year and this year, people recognize that they have a voice through voting,” she said. “People being complacent is the reason we’ve ended up in this situation. So I think there will be a very big difference come November. People will recognized that we need to get these individuals who don’t take our interest at heart out of office.”