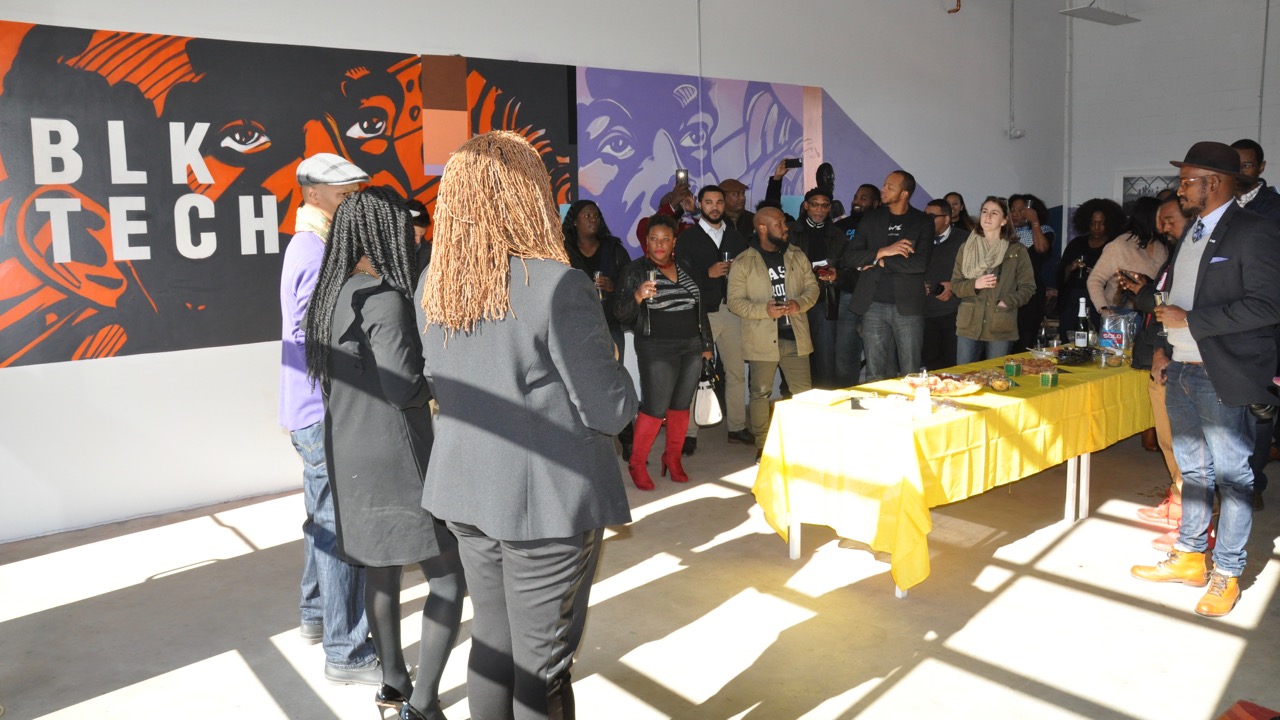 BLKTECH Interactive, a statewide initiative to support technologists and entrepreneurs of color, has found a new home in Camp North End.

Last Saturday, the organization’s founder and president, Sherrell Dorsey, hosted a Champaign toast to christen the new space — 1,200 square-foot with an inside mural painted by artist Jimi Thompson, a.k.a. Dammit Wesley.

Dorsey, who is working toward earning a master’s degree in data journalism at Columbia University in New York, launched BLKTECH Interactive in December 2016. Since then, the organization has hosted quarter events at various locations throughout the city.

The organization also partnered with Carolina Small Business Development Fund to provide entrepreneurs of color access to $100,000 in micro loans.

In an interview with Qcitymetro, Dorsey said the new space will allow BLKTECH Interactive (known locally as BLKTECHCLT) to operate more effectively. She said she plans to use the space to host monthly workshops and other training opportunities. In May, she said, she hopes to host an opening reception for a Miami, Fla.-based black-tech group that is planning a major event in Charlotte.

A popular site for black entrepreneurs

Dorsey said the BLKTECH Interactive space is sponsored by a 1-year grant by the OrthoCarolina Foundation, which is sponsoring an innovation incubator and residency program called “The Launch Pad” at Camp North End.

Dorsey said she was “beyond enthusiastic” with the organization’s new home.

Dorsey said she founded BLCKTECH Interactive after noting that African Americans were often missing at technology-related functions and meetups in Charlotte.

We thought, if we’re feeling this way, there has to be other people who are working in this space who don’t feel visible,” she said. “We anted to create a supportive community around this idea that, as Charlotte continues to grow in terms of innovation and talent development and workforce, we want to play a role in that and have a seat at the table.”

A home for creative Charlotte

Over the coming years, Camp North End is expected to emerge as hub for Charlotte’s creative class.

Last year, City Council approved rezoning and up to $15 million in infrastructure improvements in and around the site.

When it’s all said and done, Camp North End will consist of a massive mix of offices, housing, event spaces, retail shops and more. Developers estimate it could take 15 to 20 years or more to fully realize the vision.

“Sherrell and her colleagues are working to ensure that the economic opportunity that will be created in the North End is available to all Charlotteans, and Camp North End is very proud to be able to host their work,” he said.

Dorsey said BLCKTECHCLT is accepting memberships at $99 a year.

CORRECTION: This article was updated on 01/10/2018 to reflect the correct year in which BLKTECH Interactive was launched.