How does a historically black community embrace change without losing its cultural identity? For much of the last three years, […] 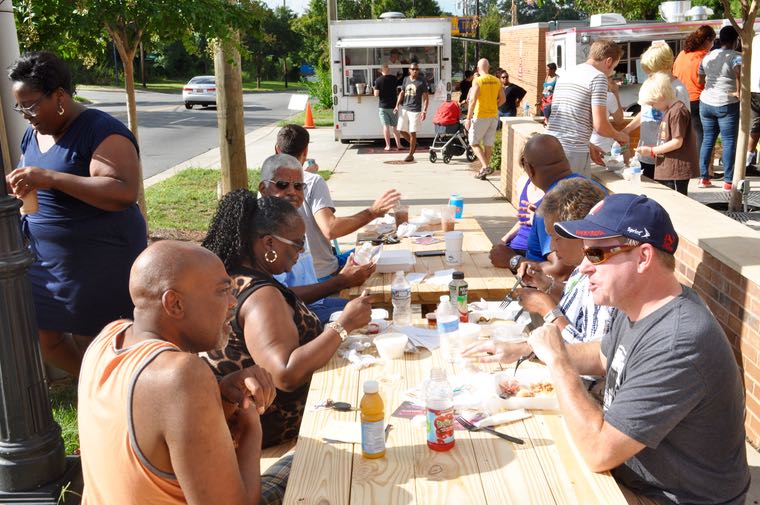 Five Points residents and elected leaders come together at a food-truck event to promote a new green space that will host outdoor events and build community relations. As more people look to live close to uptown Charlotte, the historically black community has seen an influx of newcomers, Aug 2016. (Photo: Qcitmetro.com)

How does a historically black community embrace change without losing its cultural identity?

For much of the last three years, leaders in the Five Points neighborhood near uptown Charlotte have been wrestling with that question.

As development and new families move in – a.k.a. gentrification — some longtime residents have voiced concern that Five Points may lose its historic identity and be rebranded to serve the needs of its new and more affluent arrivals.

Last week, a group of stakeholders led by Charlotte Center City Partners unveiled a branding campaign for Five Points that it hopes will both honor the neighborhood’s past while also projecting a sense of vibrancy and economic growth.

The campaign will begin with the erecting of new signage in the area — signage that includes a colorful, new logo and the phrase “Proud History, Strong Future.” The campaign also will use posters to spotlight some of the neighborhood’s most prominent business leaders.

Alysia Osborne, director of the Historic West End initiative, which is funded by Center City Partners and the Knight Foundation, said the branding effort will apply only to the commercial district that runs west from the Interstate 77 bridge on W. Trade Street and along Beatties Ford Road, ending at French Street, which is where the city’s trolley extension will stop.

“Five Points is a very important part of Charlotte,” she told me during a phone interview. “What we’re trying to do is make sure that newcomers and the folk that live here, and have lived here, that that message is consistent and clear about what this area is and how important it is in Charlotte’s history.”

Osborne said the branding effort will not include residential neighborhoods, which, she said, already have strong identities.

The goal, she said, is to create “an active neighborhood center along the business district.”

It must be noted that Five Points occupies an area that holds tremendous economic potential. Located just west of center city, it offers some of the best skyline views in all of Charlotte. And the trolley line, when completed, will only enhance the area’s attractiveness.

As gentrification spreads in cities across the nation, Charlotte’s Five Points district is not alone in its struggles to maintain its identity as a place of African American history and culture. In some cities, developers and real estate companies have been behind a push to rebrand historically black neighborhoods to better suit an influx of white families and upscale commerce.

In New York City, for example, real-estate interests have tried to rebrand a section of history Harlem as “SoHa” – a move that hasn’t gone over so well with some of the neighborhood’s black residents.

Osborne, who is African American, said her goal for Five Points is to unite residents and stakeholders, not antagonize them.

“Forty-four people move to Charlotte every day,” she said, referencing an oft-quoted figure that reflects the city’s growth. “To some people, that’s a good thing; it signifies prosperity, that (people) are moving to Charlotte for great things and we’re growing. But some, if you talk to them, it’s a scary, fast-pace growth.”

Preserving the history of Five Point – the gateway to Historic North End, also known as the Beatties Ford Road corridor – is crucial to that mission, she said.

Long before it launched the branding campaign, Center City Partners worked with Atlanta-based APD Urban Planning + Management to develop broad concepts. It then worked with Five Points residents and business leaders to refine those efforts. The final logo — a colorful pentagon with a yellow circle at its core — was designed by West End resident Jason Burke, who owns Atomic Design Co.

Osborne said the effort was extensive, involving door-to-door surveys and feedback from an advisory committee.

She said she believes the results strike the right balance.

“Brands aren’t forever; they evolve,” she said. “So as the community grows or changes over times, it still respects the history and culture but also has that brand as part of that evolutionary change.”

Clarification: This  article was updated to better reflect the process involved in developing the Five Points branding campaign.