Why a pop-up dinner should be in your future 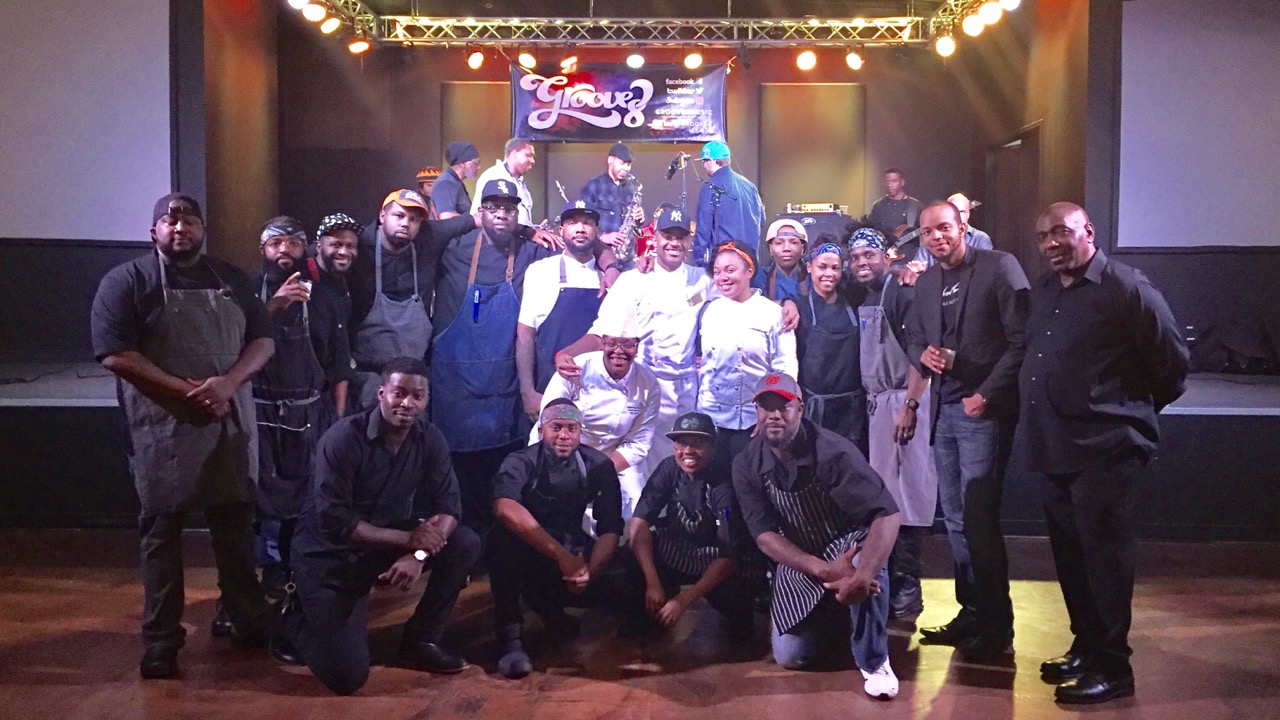 At the Soul Food Sessions Holiday Funk Fest, 12 African American chefs and two mixologists prepared dishes and drinks that were as individual as the men and women who created them. (Desiree Rew for Qcitymetro.com)

Last Friday, I ended my week by stopping in at Soul Food Sessions Holiday Funk Fest, a pop-up dinner held at Project 658 on Central Ave, where 12 amazing, African-American chefs and two mixologists did things with food and alcohol that I didn’t know was legal.

Each prepared dishes that showcased his or her particular expertise, and none lacked in taste or creativity.

No two dishes were alike. And receiving a plate from each chef as I walked from station to station was like unwrapping a new Christmas present each time.

Among the 12 stations were two bars lead by mixologists DiSean Burns and Justin Hazelton. As soon as I entered the building, I was greeted with spiked eggnog topped with a dash of nutmeg. What a way to say hello!

The Groove 8 Band provided a music menu that set the mood for an upbeat and festive affair.

I enjoyed every morsel, but the two dishes I am still thinking about are Chef Abdullah’s maple bacon cronut with orange cranberry sauce and Chefs Brandon and Sydney Green’s maple whisky glazed salmon, sweet potato and collard green waffle and candied pecan. The love child of the donut and croissant, the cronut has the softness of a donut and the flaky, pull-apartness of a croissant. The sweetness of the glaze and the crunchy bacon bits formed a perfect union. It was truly delectable. Cronuts are now my favorite food group.

Chefs Green seasoned and cooked the salmon perfectly. It was the best I’ve had in quite a while — not over or under cooked. The spices did not overpower the salmon yet provided an exact amount of flavor with each bite.

I couldn’t get over the collard greens being in the waffle mix, but it didn’t take away from the flavor of the waffles. In fact, I could barely taste the collards, which were clearly visible. It was a delightful dish with ingredients I would not have ever thought to marry in a mixing bowl.

Pop-up dinners aren’t the traditional brick-and-mortar dining experience. In fact, they are a perfect anecdote to the predictability of restaurant dining. They also are a great way to try dishes prepared by chefs you likely won’t find in a restaurant kitchen.

The mystique of the pop-up dinner feels exclusive, as if you’ve joined Charlotte’s elite food society.

Soul Food Sessions CLT has a following that has supported four previous dinners, with a new theme and location each time. For more information, follow them on Facebook or visit their website at www.soulfoodsessionsclt.com.