The poll, taken in 11 Southern States, asked residents about their attitudes toward race, religion, Confederate monuments and the economy, among other issues. 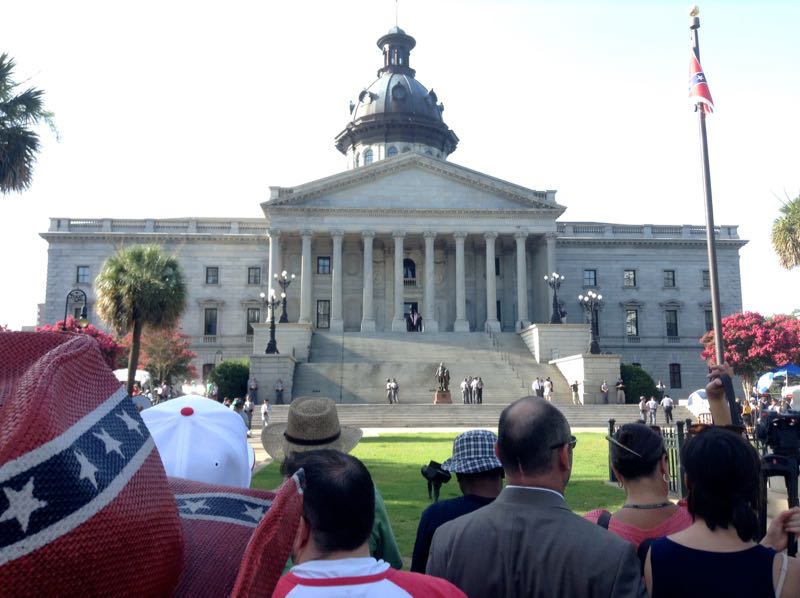 More than 50 years after the Confederate flag was raised on the State House grounds in Columbia, S.C., thousands gathered there July 10, 2015 to see it lowered and finally removed. (Photo: John Annunziata for Qcitymetro.com)

Editor’s Note: This press release was written by Winthrop Poll

Southern black residents are more likely to be religious than white residents, according to the latest Winthrop Poll, given in 11 Southern states, but are less likely to believe that America was founded as an explicitly Christian nation.

Three-fourths of blacks surveyed said religion is important in their lives. Yet fewer blacks than whites agreed on the religious principles that the United States was founded on.

Poll Director Scott Huffmon suggested several possible interpretations: “African Americans, who tend to be more devout in their Christianity, may not connect their religious beliefs to their historical beliefs, or they may see the United States as founded on slavery, which is inherently unChristian,” he said. “Irrespective, this finding warrants more research.”

Overwhelmingly, Winthrop Poll respondents of all races across the South said all races should be treated equally, and that America should protect and preserve its multi-cultural heritage.

Yet both whites and blacks felt uneasy regarding their relative safety and position in the country. When asked if white people were under attack, 46% of whites agreed or strongly agreed. And more than three-fourths of black respondents said racial minorities are currently under attack in the United States.

When asked if America must protect and preserve its White European heritage, 30% of all respondents agreed, while more than half disagreed or strongly disagreed.

Interracial marriage seems to have grown in acceptance across the region. Half of the respondents strongly disagreed that marriage should only be allowed between people of the same race. Southerners also were united in saying that people of different races should be free to live wherever they choose.

Respondents seem frustrated that “political correctness” threatens the liberty of Americans to speak their minds. Around two-thirds of residents said they agreed or strongly agreed.

With hundreds of monuments standing across the country in parks and outside government offices, the majority in the South, many politicians have pushed for the removal of statues, memorials, and other monuments that celebrate Civil War era figures. The Winthrop Poll asked residents what should be done with the statues commemorating Confederate War “heroes,” or memorials to Confederate soldiers who died during the Civil War.

Forty-three percent of Southerners said to leave the memorials to those who died in the Civil War just as they are, while one-fourth said add a plaque for context and historical interpretation, while another one-fourth said to move them to a museum. Half of the black respondents said they should be moved to a museum.

When poll respondents hear someone referred to as Southern, almost three quarters imagine that person to be close to their family. More than half think of the hypothetical “Southerner” as religious, though whites were more likely to say that than blacks. They also don’t think of Southerners as racists – only 15% said yes. A fourth of black respondents said they think of Southerners as racists.

More than 60% of Winthrop Poll respondents in the South said our country is headed in the wrong direction. Yet more than two thirds of Southern residents said our country’s economy is very good or fairly good.

More than half (54%) think the economic conditions in the country as a whole are moving in a positive direction, though 63% of blacks said they were getting worse and 57% of all respondents described their own financial situation as good or excellent.

Black Southerners also think that all people in the United States do not have an equal chance to succeed if they work equally hard: 61% of whites said yes, while 65% of blacks said no. And 60% of blacks strongly agreed that generations of slavery and discrimination make it difficult for blacks to work their way out of the lower class.

Winthrop Poll respondents also were asked about political parties, movements and symbols as judged by a “feeling thermometer” where ratings closer to 100 mean you feel positive and warm whereas ratings closer to 0 mean you feel negative and cold toward groups or persons. Those responses below a 50 rating were regarded as unfavorable, 50 as neutral and above 50 were regarded positive or warmly.