Wow! What a week

This week's roundup: What would America be without white folks? Kaep fights back as Trump starts petition. And George W. Bush, man of reason. 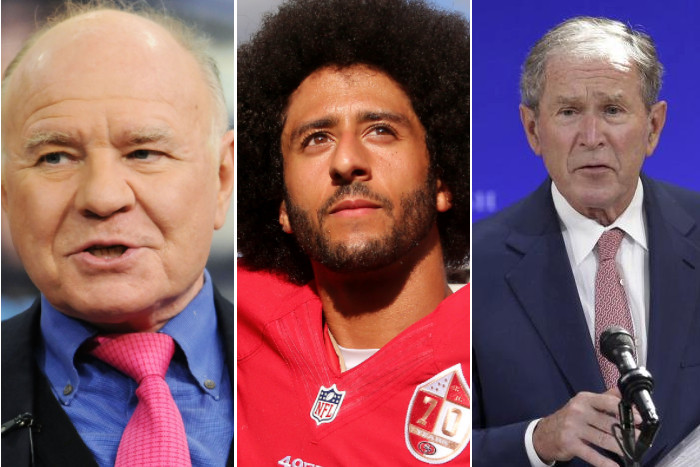 Wow! What a Week

Viacom and Spectrum have reached an agreement to continue robbing you. But if you don’t care, Charlotte-Mecklenburg, your BET, CMT and MTV are safe. Meanwhile, if you are paying $160-plus for your cable, you are still being robbed.

The Kaepernick saga continues
Colin Kaepernick has hired famous criminal defense attorney Mark Geragos to prove that NFL team owners collectively decided not to sign him to their teams. Meanwhile, President Trump keeps tweeting about what the owners should do regarding their players. He even put out a petition to “Stand for the Anthem.” I thought Trump was going to put America back to work. It seems like all he wants to do is keep people unemployed.

Know your chicken
The Sweet Dixie Kitchen restaurant in Long Beach has some of the best chicken in Southern California. Owner Kimberly Sanchez has a secret ingredient that makes her chicken taste so good. Some of her employees were seen carrying boxes of Popeye’s chicken into her restaurant’s kitchen. Sanchez said she sought Popeye’s approval but didn’t hear back. For four years she served breakfast and lunch without a proper kitchen in the whole joint. She is selling chicken for $15 that anyone could easily buy for $8.99. If customers don’t know their chicken then they deserve to be plucked.

Bush, the voice of reason
Former President George W Bush decided to make a statement about current events, and it was actually pretty good. His speech was in New York City this week at an event for the George W. Bush Institute. He said, “bullying and prejudice in our public life sets a national tone and provides permission for cruelty and bigotry. The only way to pass along civic values is to first live up to them.” Wow! Bush is out here sounding like a non-racist Franklin D. Roosevelt.

Say it ain’t so
A recent study points out that Charlotte isn’t a great place to live for gays, immigrants and minorities. The people trying to bring Amazon here must not have read this report. The UNC Charlotte Urban Institute conducted the annual survey of 400 people representing a cross-section of the county. I know that wasn’t a large percent of the population, but the results still need to be analyzed. The gap between the have and have-nots is growing every day. It’s not just a Charlotte problem; it’s an American problem.

ESPN has cake on its face
The Worldwide Leader of Sports keeps putting its cleats in its mouths. In August, it held a fantasy football draft that looked like a slave auction. This month the network is apologizing to the University of Washington after using actual cupcakes to show how easy Washington’s football schedule is. Aside from wasting food, the concept was doomed from the start. Cupcakes are moist and soft, the complete opposite of a football player. Slave auction one minute, suspending someone for calling out racism the next. ESPN needs to do better.

Be grateful, America
Swiss investor Marc Faber said, “Thank God white people populated America, and not the blacks. Otherwise, the U.S. would look like Zimbabwe, which it might look like one day anyway, but at least America enjoyed 200 years in the economic and political sun under a white majority.” Zimbabwe, you might recall, is a country where the president stacks his cabinet with cronies and family members, and he fires people who are in conflict with him. A country where the president has ongoing hostilities with minorities in his country. A country where the first family flaunts its wealth and the first lady’s nickname is “Gucci Grace.” Yeah, I guess we do have to thank white people for not having those problems.