On the menu at On The Table CLT: Ideas, solutions, collaboration

On Oct. 25, thousands will gather for a community-building dialogue on how to make Mecklenburg County a better place to live and work. Host a gathering, find a table or join the conversation on social media using #OnTheTableCLT 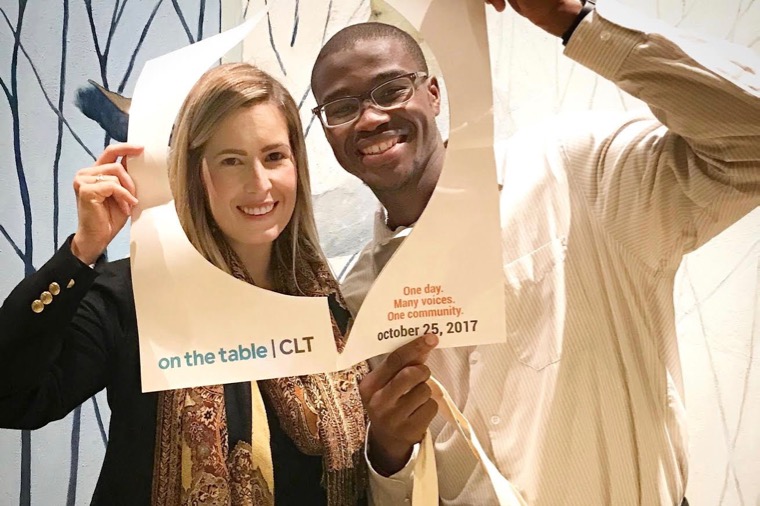 Whitney Feld and Will Jones, of Foundation For The Carolinas, are leading efforts to ensure a true reflection of the community for On The Table CLT conversations on Oct. 25.

Five thousand voices engaged in dialogue about the future of Mecklenburg County all on one day — that’s the goal of On The Table CLT.

This “imaginative public square,” consisting of 500 small groups of people from all ages and ethnicities, is an initiative of the Community Building Initiative, Foundation For The Carolinas and the Knight Foundation. The Oct. 25 event seeks to connect residents, generate new ideas, inspire solutions, and foster collaboration.

On The Table CLT is just one of many ways Foundation For The Carolinas is putting into action recommendations from the Charlotte-Mecklenburg Opportunity Task Force report, released earlier this year.

“When you strip away the strategies and tactics in the Opportunity Task Force Report, the fundamental message is that most of us live segregated lives and that makes it tough to be proximate to community challenges. We don’t know each other, we don’t talk to each other and we don’t know one another’s stories,” said Brian Collier, Foundation For The Carolinas Executive Vice President.

“However, I firmly believe that through initiatives like On The Table, if we challenge ourselves to have deep and meaningful conversations, we will be able to build stronger relationships, create true social capital, and advance economic mobility for all of our children. On the Table — by itself — isn’t going to solve our problems, but it does provide a terrific platform for Charlotte to take a step toward creating inclusiveness.”

Foundation for the Carolinas is one of 10 community foundations across the U.S. replicating On the Table with funding from Knight Foundation, which expanded the initiative to 10 communities this year:  Charlotte;  Akron, Ohio; Columbus, Ga.; Detroit; Gary, Ind.; Lexington, Ky.; Long Beach and San Jose in California.; Miami; and Philadelphia.

Will Jones, Community Programs & Civic Leadership program associate, said FFTC wants to encourage those hard discussions. Jones and Whitney Feld are leading FFTC’s efforts to make the event a true reflection of the community — working out logistics, securing venues and moderators, and even helping seat potential participants at tables.

“We’ve been intentional from the beginning about leveraging our contacts and relationships to ensure diverse conversations,” said Feld, Assistant Vice President, Development for the Robinson Center for Civic Leadership Companies, organizations, groups, and individuals will host On The Table CLT gatherings, but discussions will be driven by participants. More people can join the conversation on social media using #OnTheTableCLT.

The Foundation will be a “super host,” with the goal of hosting 100 participants discussing the role of social capital in economic opportunity. An array of organizations have signed up to be super hosts, including the Charlotte-Mecklenburg Police Department, Charlotte Post Foundation,  St. Mark’s United Methodist Church, YMCA, Hope Haven, Muslim Women of the Carolinas, Charlotte Mecklenburg Library, Queens University of Charlotte, Levine Museum of the New South, and the Girl Scouts Hornets Nest Council.

Smaller organizations around the region, from senior centers to recreation centers, are opening their doors; individuals are hosting groups in their homes. Some conversations will be organic; others will be themed, such as Time Out Youth Center’s discussion on the state of wellness for young people in Charlotte.  And while some groups will share a meal, some may gather over coffee or beer.

“We want people to have discussions anywhere, at any time, with anyone they like,” Jones said. “We just want to have diverse people, diverse conversations in safe environments.”

If you live, work or attend school in Mecklenburg County, you can participate. Sign up to host your own event or find a table near you. If you need help, contact  Whitney Feld or Will Jones at Foundation For The Carolinas.

The program builds on the success of The Chicago Community Trust’s annual On the Table initiative, which launched in 2013. Last year, more than 55,000 Chicago residents came together to discuss community issues and brainstorm solutions, according to the Knight Foundation.

At the conclusion of gatherings on Oct. 25, On The Table CLT will send participants a brief email survey to learn more about their experiences. The results will be shared with participants and the community at large.

“Our goal in this first year is to unite, engage and connect people in small groups on one day, centered around a common theme,” Dianne English, Community Building Initiative executive director, said in a new release.  “We know that big ideas can spring from small gatherings and that people invest in what they help create.”

About the Opportunity Task Force

A 2014 academic study showed that Charlotte’s poor children have the worst odds of those in the 50 largest U.S. cities of rising from poverty. The Charlotte-Mecklenburg Opportunity Task Force was launched to address the issues around economic opportunity in the region. It developed a set of recommendations, released in March, to broaden access to economic opportunity for all residents of Charlotte-Mecklenburg. FFTC continues to support the critically important work of the task force, now known as Leading on Opportunity.

COVER PHOTO: Whitney Feld and Will Jones, of Foundation For The Carolinas, are leading efforts to ensure a true reflection of the community for On The Table CLT conversations on Oct. 25.