The protests come a week after NFL commissioner Roger Goddell effectively sought to ban players from kneeling for the national anthem. 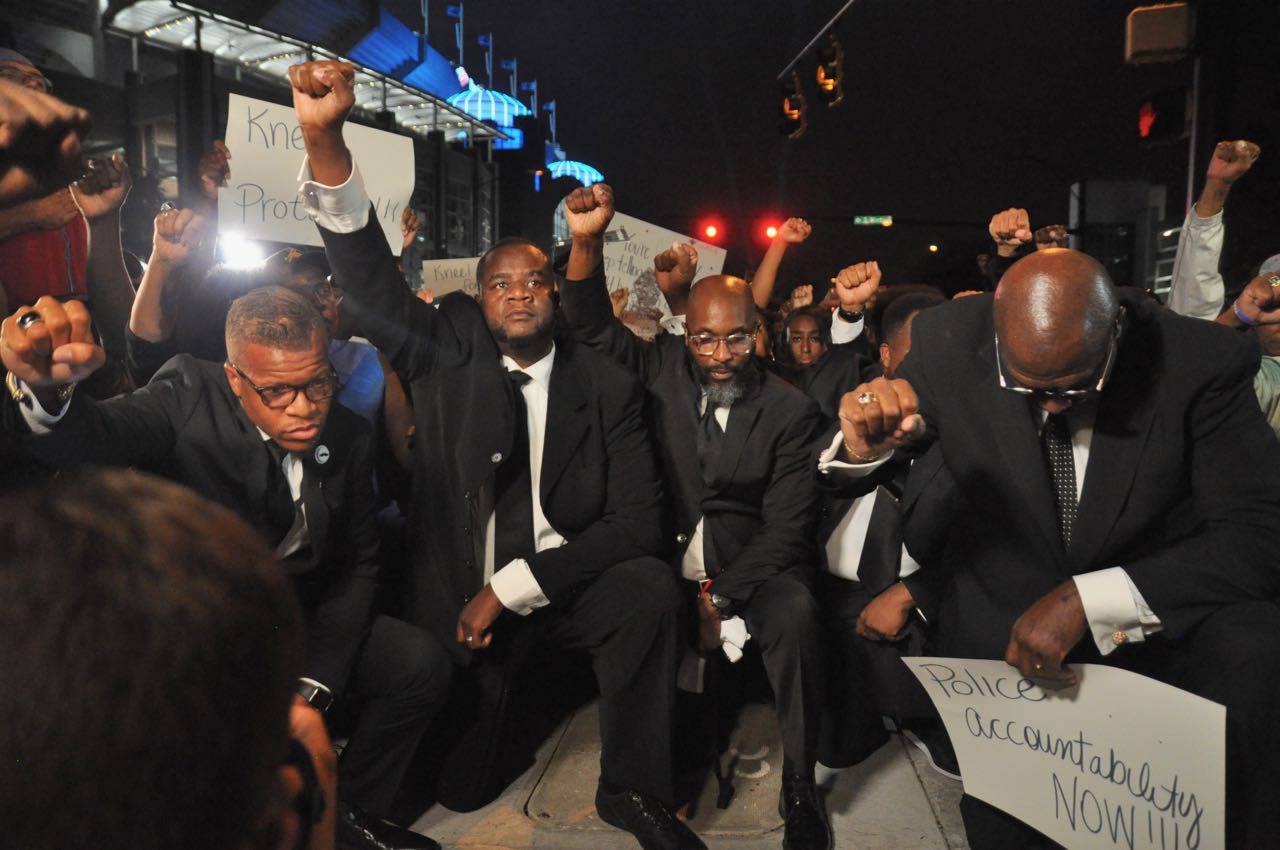 Activists led by local clergy take a knee outside Bank of America Stadium just before the start of a Thursday Night Football game on Oct. 12, 2017. (Photo: Glenn H. Burkins for Qcitymetro.com)

Several dozen pastors and activists showed up in support of a “Kneel-In” protest outside Bank of America Stadium Thursday night before the Panthers-Eagles football game.

The 7:30 p.m. protest was held at the intersection of Mint and Graham Street, just as fans were heading inside the stadium. Protest organizers stood together in solidarity, some holding signs that read “United for Justice” and “Kneel in Protest.”

Bishop Kevin Long of Temple International Church spoke to members of the media from a bullhorn about the protest’s mission.

“The kneel-in protest will serve as a platform for citizens of Charlotte and the surrounding areas,” he said, “to let America know that we are not compelled to take a stand for a country that doesn’t stand with us.”

The scene was a peaceful one, with no skirmishes or violence. A handful of CMPD officers lined the perimeter around the group. A black man who appeared to be a counter-protestor stood nearby shouting “Jesus Saves!” and “Jesus Loves You!” A white man, displeased with what he said was disrespect for the flag and national anthem, shouted lines from Martin Luther King Jr.’s “I Have a Dream” speech and phrases such as “Judge a man by his character not his color.”

Kneeling during the national anthem has become a form of protest for some National Football League players, inspired Colin Kaepernick, the former San Francisco 49ers quarterback who routinely took a knee in 2016. Kaepernick said his actions were meant to draw attention to racism and police shootings of black and brown people — including the killing of Keith Lamont Scott, who was killed in 2016 by a Charlotte-Mecklenburg police officer.

Kaepernick, one of the NFL’s top quarterbacks, has not been picked up by another NFL team, leading supporters to suspect that owners and league officials have conspired to punish him.

Eric A. Montgomery, an attorney for the group, told Qcitymetro that Kaepernick raised legitimate issues that must be addressed in America.

“All we’re trying to do is say, ‘Look, all (Kaepernick) tried to do is highlight a pervasive part of our community.’ We want to help shed a light on that, and also work collaboratively with players, community, churches, the police, to ensure we’re all on the same script, so we can get this taken care of.”

Hector Vaca, a Latino activist, spoke to the group about Rueben Galindo, a Charlotte man who was shot and killed by a CMPD officer Sept. 6. Police video footage of the incident showed that Galindo was holding a gun but had his hands raised above his head.

“How many people, black and brown, have to die in our community for our police to take responsibility?” he said. “How many have to die before we see justice?”

The Rev. Sarah Ellis, associate pastor of First Baptist Church-West, said she supports the rights of NFL players to protest during the anthem, though team owners and league officials have urged them to stop.

“Equal rights are human rights,” Ellis said, “and whenever some tells you, a man, that you got to go against your freedom…you got freedom of speech, freedom to protest. When someone tells you that, there’s going to be consequences. This is not slavery.”