Page Braswell said she drove to the Mount Holly home, about two miles from her own, because she was fed up with racism and bigotry. 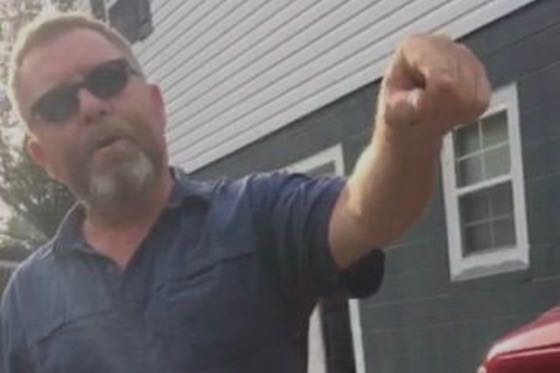 What would you do if you saw someone – a stranger, no less — flying a Nazi flag in front of his/her home?

With emotions still high following the weekend violence in Charlottesville, Va., one Charlotte-area woman decided to take action. She hopped into her car on Sunday and drove to a home where a Nazi flag was on display to confront the owner.

What followed was a tense, 2.5-minute video that she posted to Facebook.

Profanity Alert: If you’re watching this at work, you might want to lower the volume.

Page Braswell said she drove to the Gaston County home, about two miles from her own home, because she was simply fed up with racism and bigotry.

“This is my town, nazis don’t get a pass in my town. Nope,” she told Qcitymetro in an email exchange.

As of Monday morning, the video had been viewed more than 31,000 times – to mixed reactions – and had been shared more than 700 times.

“Mt Holly, NC. Not cool. This is Trumps Amerikkka,” Braswell posted above a photo of the home. Those who posted comments in response to the video were generally supportive, if not admiring of Braswell’s action. Others cautioned against such confrontations.

“This moron is garbage. I wouldn’t put myself in danger going to creeps like this house. Be careful Page,” wrote one commenter.

At one point during the confrontation, the man denied being a Nazi, but in the next breath proclaimed that “this is Nazi F—ing America.”

Braswell asked the man if he thought “Trump had something to do with all of this.”

“If you don’t get the hell out of here, you and me gonna have trouble. I promise you that,” the man responded.

At that point, Braswell (wisely) go back into her car and drove away.