Just three and a half hours from Charlotte, this natural wonder so inspired a U.S. president that he decided to buy it. 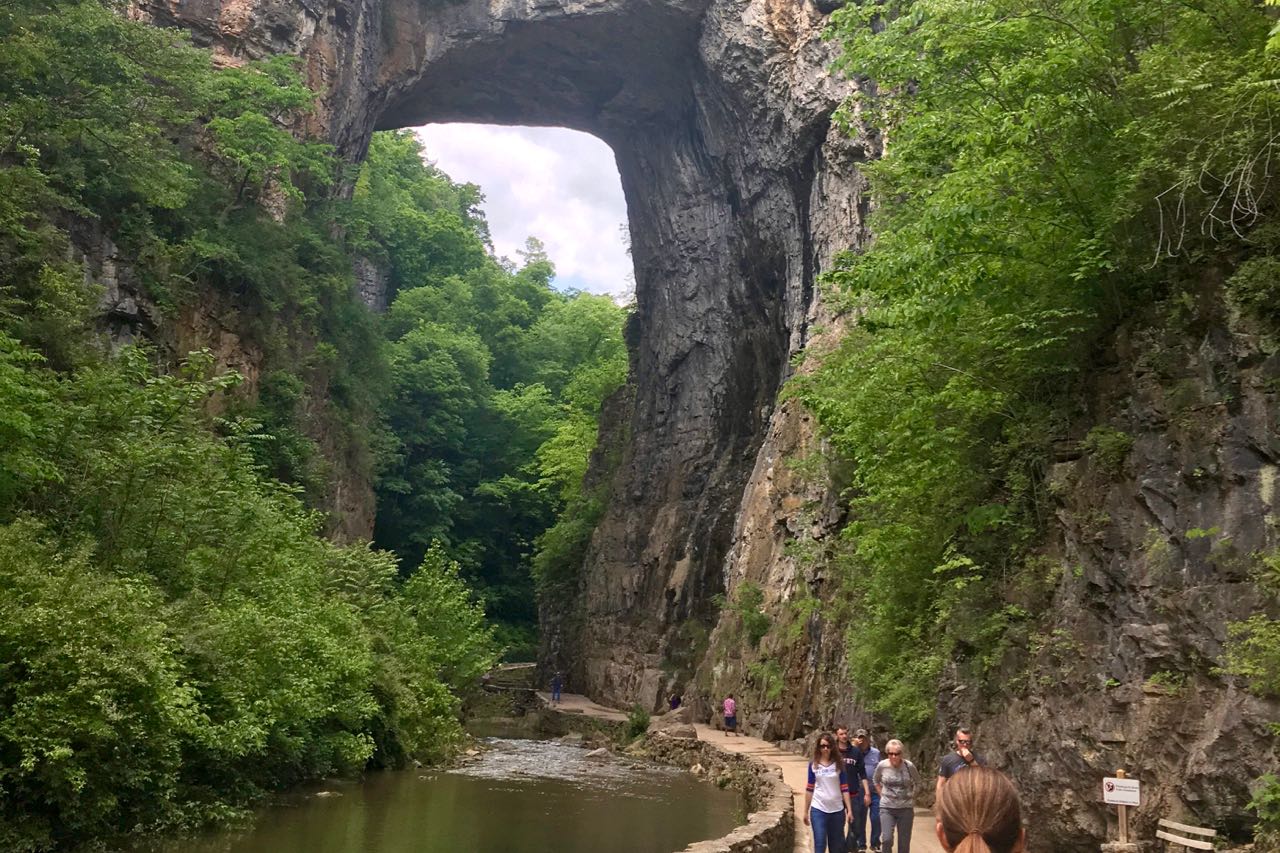 Natural Bridge: Pictures don't do justice to the scale of this 215-foot-tall natural wonder, which is a limestone gorge carved out by Cedar Creek over millions of years. (Qcitymetro)

The more I travel, the more I find that my most memorable experiences have little to do with human ingenuity or over-the-top technology. And that’s the case with Natural Bridge State Park in western Virginia, just north of Roanoke.

Like the name implies, Natural Bridge is a huge chunk of rock over which a two-lane road runs. I totally missed the road’s significance while searching for the park’s entrance. (Someone really ought to put up a marker.) But I guess the road isn’t the point.

It’s only when you pay the $8 entrance fee ($6 for kids), walk down a trail and slowly come upon this magnificent, hollowed-out oval rock formation that you take in the true beauty and wonder of Natural Bridge.

It’s as if the hand of God took a penknife and carved out an oval in some of the toughest limestone rock imaginable to make way for an opening of cool, rushing water. Sure, there’s a more scientific explanation for this geological rarity dating back millions of years, but I prefer the more ethereal one.

What I really liked about the whole experience was its simplicity and succinctness.

Sure, we could have spent a day or more exploring the 1,500 acres of Virginia’s newest state park and staying at the adjacent hotel. But the 90 minutes it took for a quick side trip off Interstate 81 was plenty. (We decided to stop while traveling home from Washington, D.C.)

Going from the burning asphalt of a late Spring day into the park’s tree-lined trails provided an immediate sense of coolness. And there’s no greater stress reliever than the sound and sight of the rushing stream bordering the trail. It’s obvious that not much has changed during the hundreds of years that Natural Bridge has been a state attraction.

Then came the history lesson. This is the land that some say two presidents played a role in — George Washington for surveying and Thomas Jefferson for buying at what today would be $160.

Some say there’s no evidence of Washington’s role, and this may be a marketing myth. But there’s little question that Jefferson was so taken with Natural Bridge that he called it the “most sublime of Nature’s works” and he put his money where his mouth was by buying it.

The gift shop and visitors center could use some sprucing up, but I give them credit for carrying locally made crafts and food items along with the usual tourist schlock of t-shirts and key rings.

Along the trail, as if out of nowhere, we encountered a clearing of Monacan Indian life featuring two Native Americans, which I wasn’t sure how to take. It was almost like an afterthought rather than a full exploration of the land’s original owners. But maybe that’s my 21st Century sensibility rearing its ugly head.

It’s worth noting that after Thomas Jefferson’s estate sold Natural Bridge in the 1700s, private owners tried all kinds of ploys to attract visitors until the state park system took over last year. But it just might be that this hodgepodge of ownership and marketing kept Natural Bridge in a time warp that continues to be its biggest selling point today.

Editor’s Note: If you have a Day Trippin’ adventure you’d like to share, email editor@qcitymetro.com. We’ll give you a $50 gift card if your story is selected.