In attempting to repeal his signature Affordable Care Act, Obama said he hoped members of Congress would "look at the facts and speak the truth, even when it contradicts party positions." 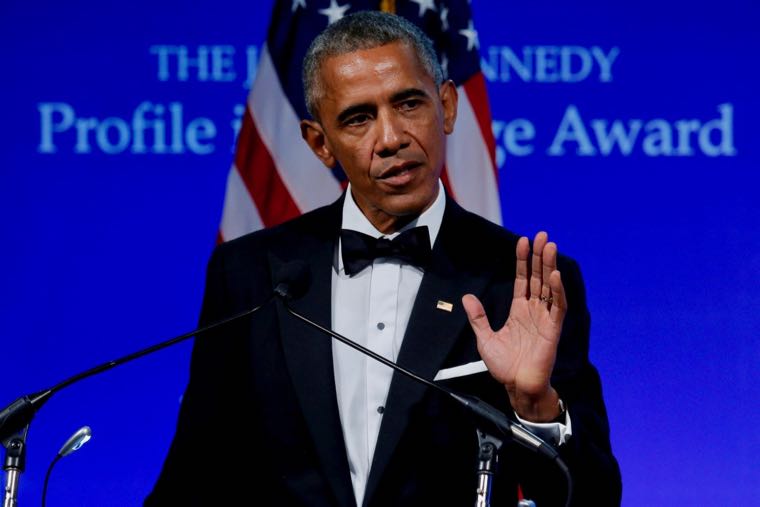 Former U.S. President Barack Obama speaks after receiving the 2017 Profile in Courage Award during a ceremony at the John F. Kennedy Library in Boston, Massachusetts, U.S., May 7, 2017. REUTERS/Brian Snyder

BOSTON (Reuters) – Former President Barack Obama expressed his “fervent hope” on Sunday that members of Congress would look beyond party lines when considering the future of the country’s healthcare system.

The Democrat’s remarks at a ceremony in Boston, where he accepted the John F. Kennedy Library Foundation’s “Profile in Courage” Award, came days after the Republican-controlled House of Representatives narrowly passed a bill to repeal and replace the Affordable Care Act, or Obamacare, the 2010 law that enabled 20 million more Americans to get health insurance.

Referring to former President John F. Kennedy’s book on political courage, he noted that many members of Congress risked and ultimately lost their seats when they voted for Obamacare, which helped give rise to the conservative Tea Party movement.

“As everyone here now knows, this great debate is not settled but continues,” Obama said. “And it is my fervent hope, and the hope of millions that, regardless of party, such courage is still possible.

“That today’s members of Congress, regardless of party, are willing to look at the facts and speak the truth, even when it contradicts party positions.”

President Donald Trump campaigned on a promise to repeal and replace Obamacare, calling the law a “disaster” and ineffective.

The former president has avoided commenting directly on his successor in his three public appearances since leaving office in January and did not mention the businessman-turned-politician in his remarks on Sunday.

Last week’s House vote was only a first step toward overturning the landmark healthcare law, as the bill also has to clear the Senate, where Republicans holder a narrower majority.

Healthcare reform had long been a priority of the late U.S. Democratic Senator Edward Kennedy, the younger brother of John F. Kennedy.

“There was a reason why healthcare reform had not been accomplished before. It was hard, it involved a sixth of the economy and all manner of stakeholders and interests. It was easily subject to misinformation and fearmongering,” Obama said.

The award takes its name from Kennedy’s 1957 book profiling eight U.S. senators who risked their careers by taking politically unpopular stands. Kennedy, a Democrat, was assassinated in Dallas on Nov. 22, 1963. The 100th anniversary of his birth will be commemorated on May 29.