Directors of the two-hour documentary said they wanted the film to “hold up a mirror to society” without force-feeding the viewer. In that they succeeded 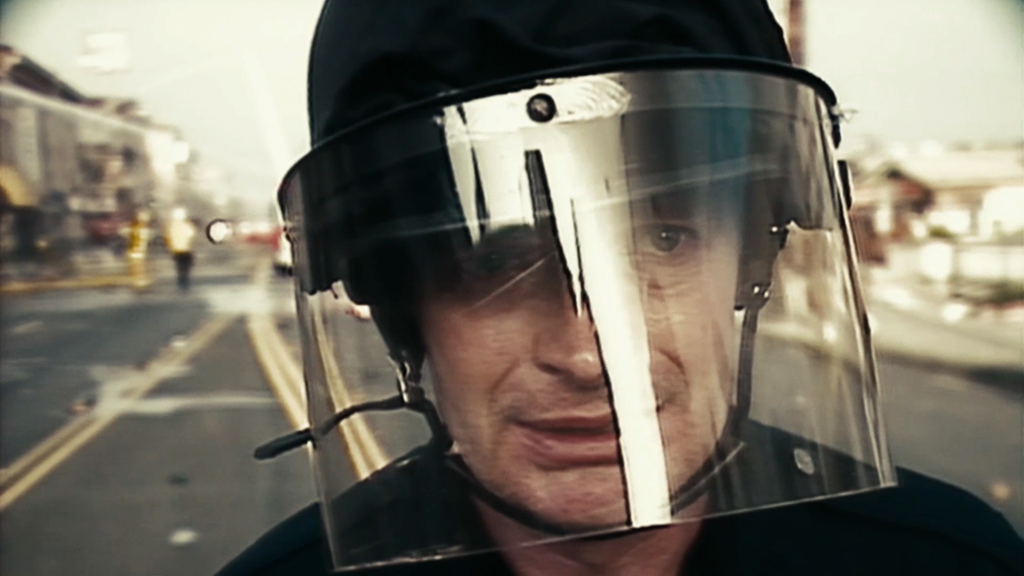 If the directors of “LA 92” meant to trigger an emotional response with their two-hour documentary about the Rodney King beating and the 1992 Los Angeles riots that followed, then all I can say is mission accomplished.

What it is beyond that is anyone’s guess.

I was a reporter in Philadelphia when the city of Los Angeles nearly went up in flames following the acquittal of four white cops who beat King in March of 1991. And like much of black America, I sat in stunned disbelief and blinding rage as a mostly white jury acquitted the officers — Stacey Koon, Laurence Powell, Timothy Wind and Theodore Briseno.

So given that perspective, I had hoped that “LA 92” would be a smart, thought-provoking retrospective, coming as it is on the 25th anniversary of the L.A. riots.

But all I got from watching the film was rage, just as I had a quarter-century earlier.

Produced by National Geographic, the film opens with some black-and-white clips of the 1965 Watts riots. It then moves quickly to the racially charged case of Latasha Harlins, a 15-year-old black girl who was shot and killed by a Korean store owner in South Central L.A. just weeks after the Rodney King beating.

The shooter, Soon Ja Du, had falsely accused the teen of trying to steal a bottle of orange juice.

Du was convicted of voluntary manslaughter but served no prison time. She was instead fined $500, ordered to perform 400 hours of community service and given five years probation – an outcome that enraged L.A.’s black community.

So by the time a jury in the affluent suburb of Simi Valley acquitted the four cops, Los Angeles was a city crouched on a stick of racial dynamite.

By the time the fires were out and the dust-to-dawn curfew was lifted, America had suffered though one of its most destructive weeks in recent history: more than 50 people dead, thousands injured, and property damage estimated at $1 billion.

Sadly, for all its brilliant storytelling, “LA 92” is little more than a painful replay of what happened that week. It lacks insight. It offers no narrated perspectives, no personal reflections shaped by the wisdom of time, and nothing to help viewers peek into the hearts and minds of white Angelinos, a group largely invisible during the upheaval.

In an interview with Qcitymetro, the film’s co-directors – T.J. Martin and Dan Lindsay — said they wanted it that way.

“The idea was to almost get rid of the middle man and create a greater connection between the audience and the raw material,” Martin said. “We wanted to make something that was a little more visceral and experiential.”

Meanwhile, Lindsay pushed back when I suggested that the film excluded L.A.’s white community, which surely must bear some burden for the racial injustices that ignited that week of horror.

“T. J. and I both felt like (we) had actually heard quite enough from the white community in Los Angeles and how they felt about that,” he said.

I asked Martin and Lindsay what they wanted viewers to take away from the documentary, and they said they hoped it would invoke a greater sense of empathy for the poor and victimized.

Indeed, the film does an excellent job of showing what befell some of the city’s Korean merchants, many of whom saw their shops looted and burned before armed men set up patrols to defend their property. It was less successful in salvaging the humanity of those who rioted.

Lindsay said he wanted the film to “hold up a mirror to society” without force-feeding the viewer, insisting that viewers are able to “handle complex ideas in their minds and will bring their own knowledge and experience to it.”

Again, I take issue. With some of our fellow Americans on the political right now questioning the very existence of facts, it strikes me as naïve that Lindsay would be so presumptuous.

“LA 92” will air April 30 on NATGEO at 9 p.m. And even though I have seen it once, I plan to watch it again; it is an excellent example of drama and storytelling. But I harbor scant hope that I will find it more enlightening the second time around.

For a second opinion, check out this local review: